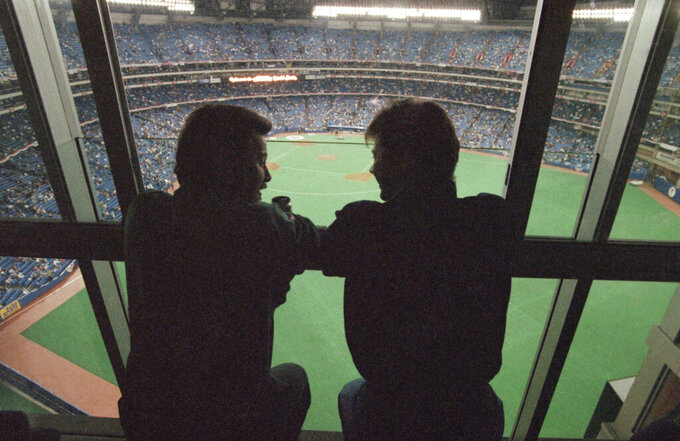 FILE - In this Oct. 22, 1992, file photo, spectators look out at the field from a window of the SkyDome Hotel before Game 5 of the World Series between the Toronto Blue Jays and the Atlanta Braves in Toronto. All 30 Major League Baseball teams will train at their regular-season ballparks for the pandemic-shortened season after the Blue Jays received a Canadian federal government exemption on Thursday, July 2, 2020, to work out at Rogers Centre. Toronto will move camp from its spring training complex in Dunedin, Fla., where players reported for intake testing. The Blue Jays will create a quarantine environment at Rogers Centre and the adjoining Toronto Marriott City Centre Hotel, formerly the SkyDome, which overlooks the field. (AP Photo/Rusty Kennedy, File)

TORONTO (AP) — The Blue Jays have been given clearance by Ontario and Toronto to play regular-season games in Rogers Centre amid the coronavirus pandemic, and await approval from Canada's federal government.

“Yes, I look forward to seeing them play even if it's an empty stadium,” Ford said Thursday. “They have great protocols, great guidelines for the players to follow."

“This is one of the most extensive protocols I’ve ever seen to keep people safe in the city of Toronto,” Tory said. “They are going to actually sacrifice a lot by having themselves confined, largely when they are not out of town, to the hotel premises."

Any exemption requires approval from the federal government. A senior federal government official said they are still reviewing the plan and have “not yet approved it.” The official spoke on condition of anonymity as they were not authorized to speak publicly on the matter.

Blue Jays spokesperson Rich Griffin said the team had not yet received an update. The Blue Jays are scheduled to start July 24 at Tampa Bay and play their home opener five days later against Washington.

Major League Baseball needed an exemption to a requirement that anyone entering Canada for nonessential reasons must self-isolate for 14 days. The U.S.-Canada border remains closed to nonessential travel until at least Aug. 21

Governments in Canada allowed the Blue Jays to move their summer camp from their training complex in Dunedin, Florida. The Blue Jays created a quarantine environment at Rogers Centre and the adjoining Toronto Marriott City Centre Hotel, which overlooks the field. Players are not allowed to leave the stadium or hotel and possible penalties for violations include fines of up to $750,000 Canadian ($551,000 U.S.) and/or up to six months in jail.

Playing regular-season games in Toronto means frequent travel between Canada and the U.S. for the Blue Jays and opponents during a time COVID-19 cases are surging in much of the U.S. Canada has flattened the epidemic's curve.

Blue Jays President Mark Shapiro has said visiting teams would not leave the Rogers Centre and hotel if the regular-season plan is approved.

Lisa MacLeod, Ontario's Minister of Heritage, Sport, Tourism and Culture Industries, said in a statement that Ontario’s Chief Medical Officer of Health has approved plans for both the NHL and MLB but acknowledged federal government approval is still needed for MLB's plan.

“These plans require players and staff to follow strict quarantine and isolation protocols from the general public, and provide the public health authorities the ability to rescind the approval if protocols are not followed,” MacLeod said. “We’ll continue to work with our Federal counterparts and sports organizations to facilitate a safe return to play if athletes are permitted to cross the border.”

Dr. Andrew Morris, a professor of infectious diseases at the University of Toronto and medical director of the Antimicrobial Stewardship Program at Sinai-University Health Network, expects a backlash in the medical community.

"It’s quite shocking that it has been approved especially with what we’re seeing with U.S epidemiology of COVID right now,” Morris said. “There is strong unanimity among the infectious disease and public health community about keeping our border closed except for essential movement. They have clearly said they are going to make an exemption. The optics are not very good."

“If you believe that for entirety of the summer, I've got some COVID-free land to sell you in Florida. It ain't going to happen," Morris said.

Tory didn't want the Blue Jays to be the only MLB team not to play in its home stadium.

“I have faith,” Tory said. “I’m very confident that this stereotype that we’re going to see all these people running around partying will not take place.”

Federal and local health authorities in Canada approved a plan for the NHL to play in Toronto and Edmonton, Alberta, but the plan does not involve international travel. The NHL selected the hub cities.