Jenkins among surging Saints' leaders as he returns 'home' 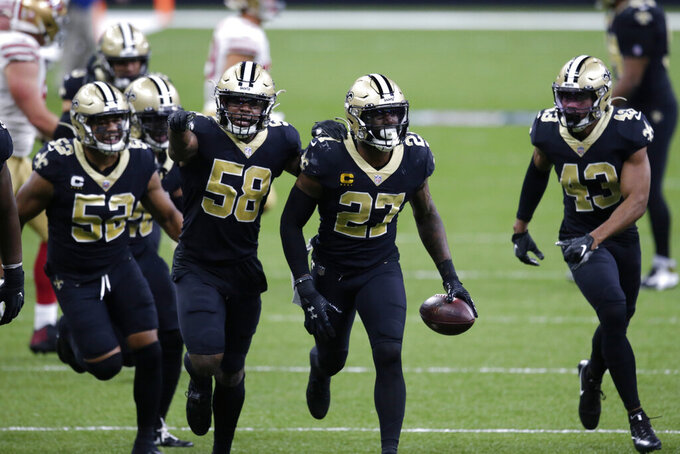 NEW ORLEANS (AP) — Saints safety Malcolm Jenkins doesn't hide what an emotional and nostalgic week this is for him.

Now trying to win his third career Super Bowl and second with surging New Orleans, Jenkins is preparing to return on Sunday to Philadelphia, where he also won a championship with the Eagles and spent the previous six seasons.

“I gave everything I had to that city, the team, did everything the coaches asked me to do, did everything to make the players around me better, try to put my best football out there and it just wasn’t valued that much by those who make the decisions,” Jenkins said Wednesday when asked about leaving the Eagles.

“So, for me, it was just more of a principle about respect. I really didn’t care what the money was, but I wanted to see what that respect factor was and it wasn’t valued at what I thought, and so decisions are made and I end up at a place that values what I bring that has really had a history with me and obviously has worked out.”

Jenkins was brought in as much for his leadership as his ability to play, considering the mileage with which he returned to New Orleans in his 12th NFL season.

Coach Sean Payton continues to rave about Jenkins’ intangibles, while New Orleans’ defense is ranked atop the NFL. And Jenkins has been no small contributor statistically. He is second on the club in tackles with 62 (solo or assisted), has two interceptions, two sacks and four tackles for loss.

The Saints gave Jenkins a four-year contract worth about $32 million, with a little more than half guaranteed. The Saints saw little risk in that deal, considering their experience with Jenkins. He was their first-round draft choice in 2009 and spent his first five seasons in New Orleans before the Saints lost him in free agency.

“Look, I trust the player. I know the player. I’ve got a clear vision for him and had always regretted letting him out of the building. That was a mistake,” Payton said. “And so, when the time came, I think I just sent him a direct message and I think his response was, ‘Great.’

“There’s a football element. There’s an intelligence element. Every ounce of him, I like," Payton continued. "And I say that not because he was part of our Super Bowl team, but man, he is good in the locker room, he is someone I think that’s got great experience now. But he was a smart player when he arrived and played very well as a nickel in Year 1.”

Now, it's certain members of the Eagles who express regret, particularly the coaches who’ve missed his presence during a difficult season — one in which a few more victories could have made a considerable difference in an NFC East Division that has seen every team struggle.

“Malcolm meant a lot. He brought a ton — a ton — of leadership,” Eagles coach Doug Pederson said. “Obviously, his play speaks for itself on the football field. (He) helped us win a championship here. But, his leadership, both on and off the football field, I haven’t really seen that from a player in a long time.

“He cares about the community that he’s living in or where he’s from and he always represents that well,” Pederson added.

Jenkins continues to speak highly of Philadelphia. He grew up not far away in New Jersey and now lives in the Philadelphia area in the offseason. Early last June he was the keynote speaker for the Philadelphia school district’s high school graduation, which was held virtually because of the COVID-19 pandemic.

“Philly was me. It was synonymous at one point in time,” Jenkins added. “So, it’s going to be very nostalgic. I’ve definitely been looking forward to this game kind of all year."

Now Jenkins returns with a club that has secured a fourth straight playoff berth after winning nine straight games and comes in with the best record in the NFC. He recognized the Saints' potential to win again this season, but also had other reasons for going back to the Big Easy.

“There really wasn’t many places I wanted to go at this point in my career,” Jenkins said. “I wanted to play for a team that I could contend with, that has a good locker room and good culture. And (there's) obviously no better team than the Saints in my book — somewhere that’s very familiar, I know the staff and know the city. And a lot of people that are here, I know what they’re about. If I wasn’t going to finish off in Philadelphia, then the Saints was obviously my best option — and a decision that I’m glad happened.”