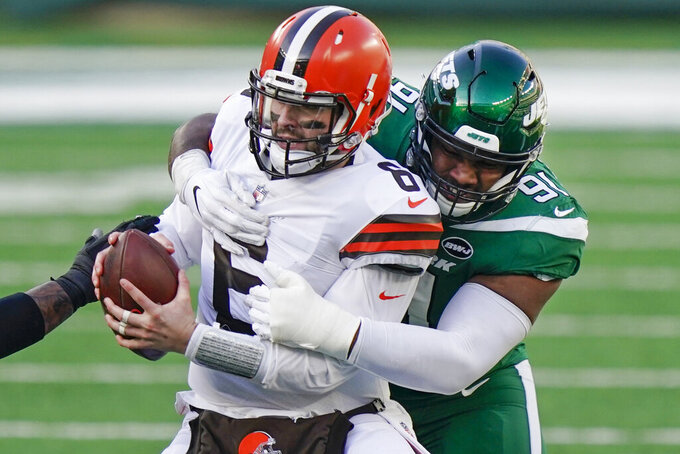 NEW YORK (AP) — The big boys up front on the New York Jets' defensive line have been a jumbo-sized bright spot this season.

Stuffing runs, pressuring quarterbacks and busting up plays in the backfield have been frequent occurrences lately — and it's something the rebuilding franchise can point to as a building block for the future.

"Definitely," linebacker Neville Hewitt said. “They have all the guys they need in that front. They can stop the run and they can pass rush when you let them guys go.”

Quinnen Williams is the leader of the pack, and the 2019 No. 3 overall pick had a breakout season before being forced to miss the final two games with a neck injury.

He played through a mostly quiet rookie season with a high ankle sprain, but Williams reported to camp healthy and leaner. It resulted in him being a consistent playmaker and one of the league's top-rated D-linemen. He leads the Jets with seven sacks, 14 quarterback hits and 10 tackles for loss to go along with 55 total tackles, two forced fumbles and three passes defensed.

“I felt like he had a good run of games,” coach Adam Gase said. "Last year, I felt like there would be a couple of games in a row where you kind of didn’t really feel him, but this year I felt like the high majority of the games that you felt him.

“If you were on the other team, you felt him — whether you’re playing quarterback or in the run game.”

The Jets' D-line has been a lot more than just Williams this season, though.

Folorunso Fatukasi, a 2018 sixth-rounder, has seamlessly slid into a starting role at nose tackle since Steve McLendon was traded to Tampa Bay in October. John Franklin-Myers, who sacked Tom Brady in the Super Bowl while with the Rams two years ago, has shown flashes of playmaking ability. Nathan Shepherd, a 2018 third-rounder, has played some of the best football of his career while filling in for Williams.

Henry Anderson has only a half-sack this season, but he has been a key part of a run defense that ranks a respectable 10th in the NFL. He has 13 run stuffs — zero or negative yards — and his 6.1% run stuff rate, according to the NFL's Next Gen Stats, is fifth in the league among players with 200 or more snaps.

The Jets actually have three of the top five in that category with Anderson, Fatukasi (third, 6.2%) and Williams (first, 7.1%).

“Our guys up front have done a really good job of stopping the run and creating a pass rush,” Gase said. “I think we’ve done a good job the last two weeks of putting the quarterback under duress.”

That has also helped lead New York to its first two wins of the season.

In victories over the Rams and Browns the last two weeks, the Jets have ranked in the top 10 in the league in average yards rushing allowed (79.5), sacks (7), average total yards allowed (301) and average points allowed (30.2).

Cleveland was missing its top four wide receivers last Sunday because of COVID-19 concerns, but the Browns still couldn't get the two-headed rushing attack of Nick Chubb and Kareem Hunt going against the Jets' defensive front. Both had touchdown runs, but didn't do much else as Chubb had 28 yards on 11 carries and Hunt 11 on four attempts.

“Just kind of keeping them off base a little bit and doing some things up front that they hadn’t seen early in the game,” interim defensive coordinator Frank Bush said. "I think it kind of discouraged them a little bit.”

Since taking over for the fired Gregg Williams three games ago, Bush has put his own stamp on the defense. The players think that has helped the overall unit perform better late in the season.

“The defense is a little bit simplified from what it was earlier,” Anderson said. “It’s letting us play fast and not think as much. Guys are just flying around."

The 29-year-old Anderson is uncertain to return next season because he's due $8.2 million — and none of it guaranteed. So, the Jets could move on and save themselves the $9.3 million salary cap hit. But a lot will depend on who's running the defense next season. With Gase likely to be fired, most of his staff will also be out the door.

The rest of the defensive line is under contract, including rookie Jabari Zuniga, a third-rounder who has played sparingly, and Kyle Phillips, who showed lots of promise as an undrafted rookie last season before injuring an ankle early this season.

It all should give the Jets plenty to be optimistic about — and give opponents next season some big-time fits.