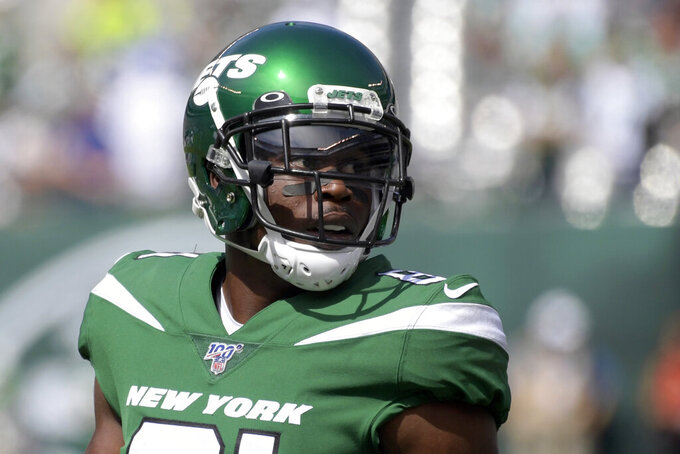 The 28-year-old Enunwa had already been ruled out for this season after the team put him on the reserve/physically unable to perform list in May.

The Jets also officially announced Monday that linebacker C.J. Mosley has opted out for the season due to family health concerns amid the coronavirus pandemic. Mosley's decision Saturday left the Jets without arguably their best defensive player a week after they traded safety Jamal Adams to Seattle.

New York got down to the 80-player maximum by waiving guard Ben Braden, running back Trenton Cannon and outside linebacker Wyatt Ray.

The move to cut Enunwa saves the Jets no money this year on the salary cap. The wide receiver will receive his $6 million salary for this year since it was guaranteed. Enunwa's contract also included a $4.1 million injury guarantee for 2021.

Enunwa had been one of New York’s most popular players — when healthy — over the past several seasons for his tough, physical approach to the wide receiver position. But staying on the field was an issue the past few years.

He played in just 12 games over the past three seasons because of injuries. After a breakout year in 2016 during which he set career highs with 58 catches, 857 yards and four touchdowns, Enunwa hurt his neck during a scrimmage in training camp and needed season-ending surgery to repair bulging disks.

He came back in 2018 and caught 38 passes for 449 yards and one touchdown, and was signed to a four-year, $36 million contract extension. But Enunwa injured his neck again in last season’s opener against Buffalo and missed the rest of the year.

The 2014 sixth-round draft pick out of Nebraska hoped to resume his playing career, but it will have to be elsewhere — if he's cleared medically. Enunwa has 119 career receptions for 1,617 yards and five touchdowns in 41 games.

The release of Enunwa means the Jets have parted ways with their two longest-tenured players in consecutive days. Guard Brian Winters, a third-round pick in 2013, was released Sunday.

Braden, first signed by the Jets as an undrafted free agent out of Michigan in 2017, came back for a second stint with New York last year and played in the season finale.

Cannon was a sixth-round pick in 2018 out of Virginia State. He was primarily used on special teams last year, including as a kick returner. Cannon had five returns for 96 yards last season, and has 113 yards rushing and a touchdown along with 17 catches for 144 yards.

Ray, the grandson of the late Nat King Cole, spent the last month of the season on the Jets' practice squad last year.