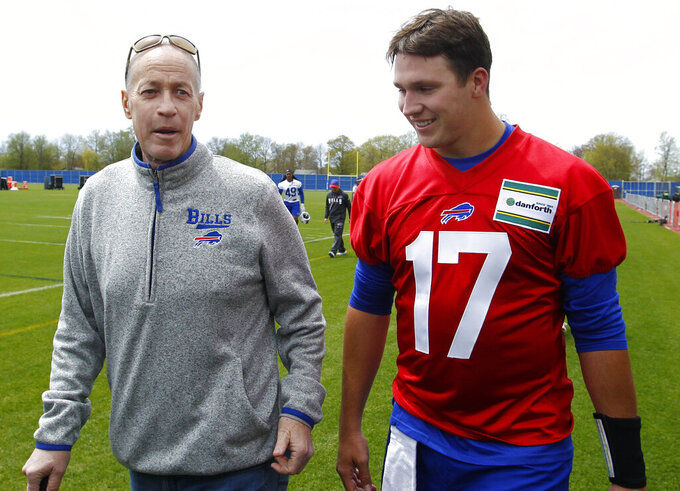 FILE - In this May 11, 2018, file photo, Buffalo Bills rookie quarterback Josh Allen (17) walks with Hall of Fame quarterback Jim Kelly following the team's NFL football rookie minicamp in Orchard Park, N.Y. Kelly has made a point of keeping his distance by limiting his chats with Allen via text for much of this year. Kelly’s decision has less to do with the coronavirus pandemic as it does Kelly not wanting to distract the third-year starter. “He doesn’t need me in his ear, so I pretty much leave him alone,” Kelly told The Associated Press. (AP Photo/Jeffrey T. Barnes, File)

ORCHARD PARK, N.Y. (AP) — Jim Kelly has made a point of keeping his distance by limiting his chats with Josh Allen via text for much of this year.

The Pro Football Hall of Fame quarterback’s decision has less to do with the coronavirus pandemic as it does Kelly not wanting to distract the Buffalo Bills' third-year starter.

“He doesn’t need me in his ear, so I pretty much leave him alone,” Kelly told The Associated Press.

That leaves him happily watching from the comfort of his living room recliner and witnessing Allen’s breakthrough year in challenging many of Kelly’s single-season franchise records, and leading Buffalo (11-3) to its first AFC East title since 1995.

“I’m excited, because if he’s breaking my records that means we’re winning,” Kelly said, with one minor caveat that takes nothing away from Allen’s accomplishments.

Kelly notes how the game has changed in leaning far more toward the passing attack than when he played before retiring after the 1996 season.

And today’s Bills are built differently than the hurry-up, “K-Gun" balanced offense Kelly oversaw in his 11 years in Buffalo, during which the team made, and lost, four consecutive Super Bowl appearances.

For someone who wasn't a year old when Kelly attempted his final NFL pass, the strong-armed and fleet-footed Allen, with the boyhood looks and “awe shucks” charm is making everyone feel young again.

His 39 combined touchdowns, including eight rushing and one receiving, have eclipsed Kelly’s single-season team record of 34 in 1991. Allen’s 30 touchdowns passing are three short of Kelly’s mark in the same season.

And with 4,000 yards passing, Allen has already topped every one of Kelly’s single-season totals to rank second on the team list. Allen is just 359 yards short of Drew Bledsoe’s mark set in 2002 as Buffalo prepares to play at New England (6-8) on Monday night.

Allen downplays his accomplishments by saying he’s humbled being mentioned in the same conversation. As for contributing to Buffalo’s success, Allen notes he is but one piece of the puzzle.

That is not to suggest Allen lacks inner drive.

His competitive nature was on display after Buffalo’s 48-19 win at Denver on Saturday. With players wearing division championship T-shirts, Allen broke a postgame locker room victory huddle with a blunt, emphatic message.

“We did something that nobody’s done for a very long time. But understand what’s at stake,” Allen said before using a profanity to make his point in a video the Bills posted on social media. “This hat and shirt’s fine and dandy, but I want one that says ... Super Bowl champs on it.”

Coach Sean McDermott smiled during a video call two days later because the scene exposed fans to both Allen’s fiery nature and leadership, by reminding everyone the job’s not done.

“That’s the rawness of the locker room in terms of the emotion after a game like that,” McDermott said. “And it shows Josh’s maturity just to be able to think about the next step in a moment like that. I certainly appreciate that about him, and his growth as well.”

Allen’s development as a leader parallels the strides he’s made improving the deficiencies he had in being the third of five quarterbacks selected in the first round of the 2018 draft.

By trading up five spots to pick Allen at No. 7, the Bills faced immediate questions for choosing a player with accuracy issues and coming from a non-power program such as Wyoming.

Fearless as he might be in throwing passes into tight coverage and not avoiding hits to gain an extra yard, Allen acknowledged he’s driven in part because of a fear of failure by letting down his teammates.

“That’s what motivates me,” Allen said. “And I fear letting the guys who drafted me, this front office and this organization, down by trading up to come and get me.”

The jump in his production is stunning.

And he's not forgotten Denver was one of the quarterback-needy teams who passed him up in 2018 by instead selecting defensive end Bradley Chubb with the No. 5 pick.

“He might not say it, but he definitely remembers,” offensive lineman Jon Feliciano said following the game.

Allen sidestepped a question about being snubbed by the Broncos by saying: “I’m where I’m supposed to be.”

From Todd Collins in 1997 to Tyrod Taylor in 2017, the Bills had 16 quarterbacks start at least one game in the span between Kelly’s retirement and Allen’s arrival.

Kelly has taken most all of those quarterbacks under his wing to counsel and support them. He did the same with Allen, memorably showing up at the Bills' facility for the quarterback’s first practice.

The two shared a lengthy chat after which Kelly, weakened by his battle with jaw cancer, had difficulty speaking but managed a thumbs-up while posing for the cameras with Allen.

Nothing has swayed Kelly since.

“I enjoy watching him play. I enjoy what he brings to the game. I enjoy his leadership,” he said. “And I just hope they can continue to build on this for many, many more years, not only for the Buffalo Bills but all these fans, who have been waiting a long time.”

Count Kelly among them.