Jordan health minister steps down after deaths in virus ward 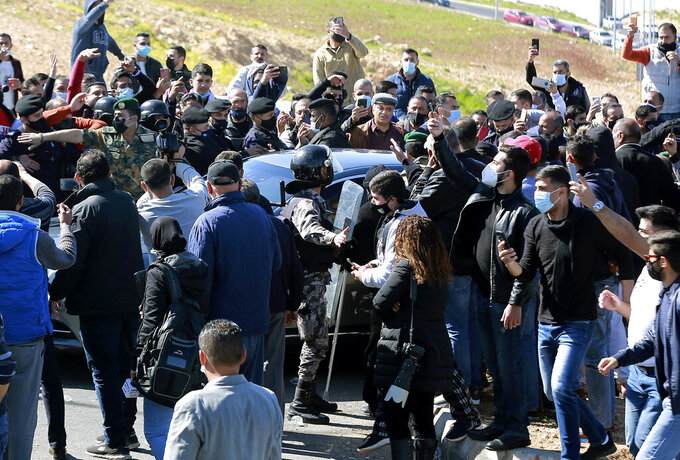 Angry people gather around a vehicle with King Abdullah II and Crown Prince Al-Hussein outside Al-Hussein Al Salt Hospital in Salt, Jordan on Saturday, March 13, 2021. State media reports that Jordan’s Health Minister, Nathir Obeidat, has stepped down after at least six patients in a COVID-19 ward at the hospital near the capital Amman died due to a shortage of oxygen supplies. (AP Photo/Raad Adayleh)

SALT, Jordan (AP) — Jordan’s health minister stepped down Saturday after at least seven patients in a hospital COVID-19 ward died due to a shortage of oxygen supplies, state media reported.

Hours later, King Abdullah II arrived at the Salt government hospital to help calm angry families who had gathered outside.

Jordanian Prime Minister Bisher al-Khasawneh ordered an investigation into the deaths early Saturday morning at the hospital in the town of Salt, 20 kilometers (13 miles) north of the capital Amman.

King Abdullah has ordered the hospital’s director also suspended, according to Al-Mamlaka TV, which added that all of the dead were coronavirus patients.

Jordan, home to 10 million people, is grappling with surging coronavirus infections and deaths and struggling to secure vaccines.

About 150 relatives of the patients gathered outside the hospital, which was surrounded by a large deployment of police and security officers, who prevented the families from entering.

One of those waiting anxiously outside was Fares Kharabsha, whose parents are COVID-19 patients. He was inside when the oxygen ran out in the ward and said medical and civil defense workers and people from outside the hospital rushed in with portable oxygen devices to try to prevent more deaths. “They resuscitated a large number of people, including my father and mother,” he said. “I do not know how many, but I saw people who died.”

The oxygen outage lasted for over 40 minutes, according to the reports.

Another relative, Habis Kharabsha, complained of a lack of sufficient services at the hospital. “At the isolation department, there was only one doctor and two nurses for 50 or 60 patients; this is mad,” he said.

The Middle Eastern kingdom has reported over 465,000 cases and more than 5,200 deaths during the pandemic. Last month, it tightened restrictions, restoring a weekend lockdown and nighttime curfews, to curb the spread of the virus.

Jordan launched its vaccination drive in mid-January with plans to inoculate over 4 million residents in 2021. On Friday, the country received 144,000 doses of AstraZeneca vaccine delivered through the global COVAX initiative.

The COVAX alliance aims to share COVID-19 vaccines with more than 90 lower- and middle-income nations. However, the program is facing delays, underfunding and limited supplies.

The EU has allocated 8 million euros to support Jordan’s purchase of vaccines. A second shipment from COVAX is expected in April.