Joshua defending titles vs Pulev with Fury fight on horizon 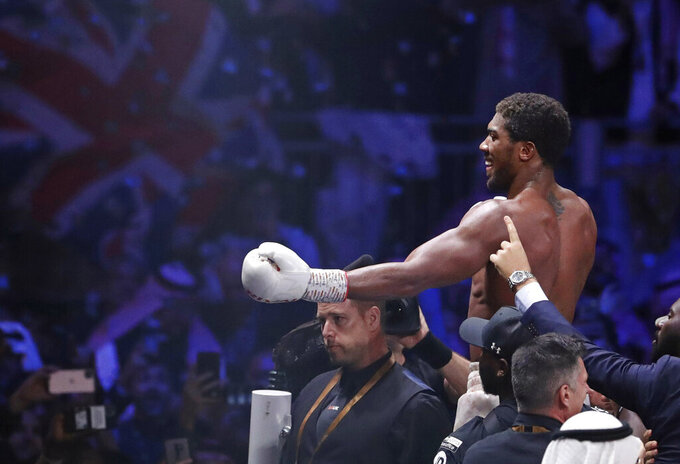 FILE - In this file photo dated Sunday Dec. 8, 2019, Britain's Anthony Joshua celebrates after beating Andy Ruiz Jr. to win their World Heavyweight Championship contest at the Diriyah Arena, Riyadh, Saudi Arabia. Joshua was able to end his self-isolation on Wednesday Dec. 9, 2020, after his coronavirus test came back negative ahead of his world heavyweight clash with Kubrat Pulev at Wembley in London on upcoming Saturday Dec. 12, 2020. (AP Photo/Hassan Ammar, FILE)

Anthony Joshua has never been so close to a shot at being the undisputed world heavyweight champion.

The WBA, IBF, WBO belts are back in his possession. An agreement in principle has been reached with Tyson Fury, the WBC champion, for a two-fight deal in 2021 to unify the titles in an all-British blockbuster.

Nothing is ever straightforward in boxing — especially when arranging what would be one of the biggest fights in a generation, perhaps the biggest ever in Britain — but it appears there’s one major obstacle in the way of an eagerly awaited Joshua-Fury bout next year.

A robust, hardened 39-year-old Bulgarian, Pulev will get the chance to blow a turbulent heavyweight division wide open again when he fights Joshua at Wembley Arena in London on Saturday as a mandatory challenger.

It will be his second world title fight — he lost to Wladimir Klitschko in 2014 for what remains his only professional defeat — and a belated shot at Joshua, having been forced to pull out of a 2017 fight against the Briton after sustaining a shoulder injury late in his training camp.

“I like that people are talking more about Joshua vs. Fury than Joshua vs. Pulev,” said Pulev, who is a 7-1 underdog with some British bookmakers. “It is not insulting to me … I am happy because while he is thinking about fighting somebody else, he is underestimating me.”

Joshua is insisting he is not looking beyond his immediate opponent, and that he is answering any questions about Fury only as a matter of courtesy, but there’s no doubt Saturday’s fight takes place in that bigger context.

Joshua’s promoter, Eddie Hearn, has been freely discussing the proposed meeting of Joshua and Fury — for which financial details have been agreed but official contracts have not been signed. Hearn has talked about how the purse will be split, possible locations for the fight — the Middle East or London appear favorites — and how it is the fight all boxing fans have been waiting for.

“I am as close to 100% as I can be that the Fury fight will happen if AJ wins on Saturday,” he said.

Hearn just needs his main man to do the business before the first crowd to attend a British boxing fight during the pandemic.

Joshua has become used to selling out Britain’s biggest sports venues — Wembley Stadium in London, the Millennium Stadium in Cardiff — but only 1,000 fans will be allowed in Wembley Arena for his first home fight since knocking out Alexander Povetkin in September 2018.

Since then he has lost his titles in shocking fashion to Andy Ruiz Jr., before immediately regaining them in a money-spinning rematch in Saudi Arabia a year ago that reportedly earned Joshua $70 million.

During his 12 months away from competitive boxing because of the pandemic, Joshua said he has “honed his craft,” returning again to developing his ability to show the “sweet science” of the sport. Ahead of Pulev, he has taken some advice from Klitschko — he has even started wrapping his hands methodically before workouts like the long-time heavyweight champion from Ukraine used to do.

Joshua has described Pulev, who is known for having a relentless jab and a tough chin, as a “tricky customer.”

“He’s not going to be an easy fight, it’s a banana skin,” Joshua said. “I’m at a level now where I can’t take easy fights or warmup fights. I’ve got to roll with the punches.

“It’s not the fight I want. I’d rather have a nice warmup fight before because I’ve been out of the game for a year.”

The 31-year-old Joshua was once regarded as a knockout machine — the first 18 fights of his pro career didn't go beyond seven rounds and he got off the canvas to knock out Klitschko in the 19th — but he has met craftier opponents and become more measured and disciplined in his approach to recent fights, picking his moments to attack.

Two of his last three wins, against Joseph Parker and Ruiz Jr., went to the judges. Against Ruiz Jr. in Saudi, Joshua relied on his longer reach to stay clear of trouble and was almost running around the ring away from the American in the final round with victory in the bag.

So, what version of Joshua will we see on Saturday?

“I'm prepared for it to go to the final bell,” Joshua said in Thursday's pre-fight news conference. "I feel like I'm a 15-round fighter, not a 12-round fighter.

“If it needs to go to 12 rounds, I will be more than capable to carry my stamina, to carry my boxing IQ, my concentration and my strength to the final bell.”