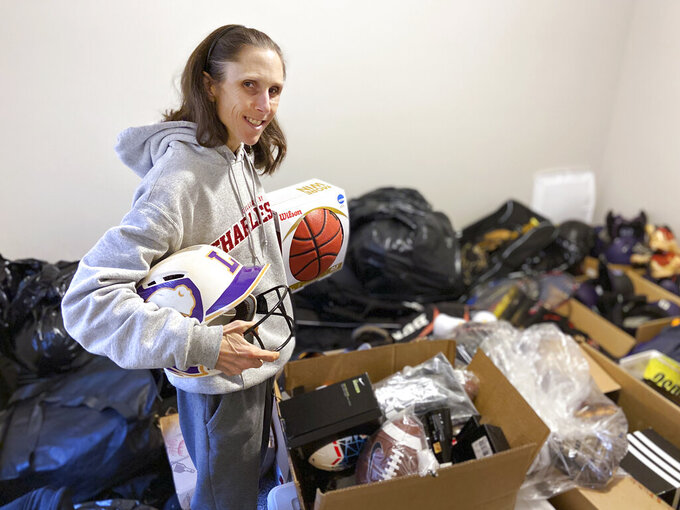 KNOXVILLE, Tenn. (AP) — Assistant Principal Sharif Ford knew just who to call when an athlete at East St. Louis High School in Illinois needed a new pair of shoes. The same woman helped a high school junior outside Chicago secure a sparkling new kit as she chases a scholarship to play college soccer.

Rhiannon Potkey also sent equipment to high school tennis coach Jarrett Walls in North Carolina, given that the cost of a new racket, even an inexpensive one, can keep would-be players from ever stepping on a court.

When Olympic catcher Aubree Munro cleared out her worn softball gear, Potkey's Goods4Greatness connected Munro with someone who could use it.

A nonprofit started by the sports writer, Goods4Greatness works to land key equipment with low-income children and teens to make sure the high cost of sporting goods doesn’t derail their athletic dreams.

“The kids that have been blessed through Rhiannon’s foundation need help like yesterday," Ford said. “When I jump on the phone with her and I explain to her the need, her past responses have been immediate attention, and that’s what we need."

Those are the people Potkey has wanted to help since she grew up in California playing tennis, softball, soccer and basketball. Potkey's father would drive some of her teammates home, and she often gifted them her gear knowing her family could afford to buy it new.

As a sports writer, Potkey saw the inequities covering high schools where wealthy parents showered their athletes with brand-new gear while only a few miles away parents stopped work in the strawberry fields to watch their children play games while sharing old equipment.

"It’s not enough," Potkey said of her plan that she first wrote down in a three-ring binder in high school. "There's always more, like we need an ecosystem. We need everyone. And so, I mean, I can fill gaps where other places don’t get to. So that was kind of the genesis of it was just my own experiences and seeing it.”

Potkey finally decided it was time when she was in her late 30s. She quit her job covering Tennessee football for a newspaper and began freelancing to free up time. The pro-bono clinic at the University of Tennessee law school helped her with the paperwork creating Goods4Greatness as a nonprofit.

She then started working the phones and emailing people to create a network.

Donations started coming in from college programs, all NCAA-compliant, like University of Tennessee, Lipscomb, Duke and Campbell in softball; Georgia, UCLA, Colorado, Southern California, North Carolina State and Washington State in tennis; Lipscomb baseball; and the Tennessee Lady Vols in both basketball and volleyball.

Pittsburgh Steelers quarterback Josh Dobbs, who played at Tennessee, made a donation earlier this month.

As a one-woman foundation, Potkey saves resources by making sure donations go to nearby low-income athletes. That's why soccer balls recently donated by the Julie Foudy Leadership Academy have been distributed to about 100 kids in Southern California.

Munro remembered Potkey's foundation while cleaning her apartment during the pandemic when she needed help with all the spare gear she had collected. Munro sent photos to Potkey of five sets of catching gear, shoes and new items she wasn't going to use, asking her what to do next. Potkey connected Munro with people in southwest Florida where she lives.

One set of catching gear, including new shoes, went to a girl being raised by a single mom.

“That one was particularly special. I just kind of see a little bit of myself in that role," said Munro, who also was raised by a single mom. “And I had a lot of people do really great things for me when I was growing up. So it felt kind of good to kind of pay that forward.”

His tennis program that coach Walls tweeted about was playing a team that had been very helpful to his girls new to the sport. He coaches at South Garner High outside Raleigh, a school where more than half the students get free or reduced lunches. Potkey saw the tweet and within a couple of weeks, Walls had rackets and balls — lightly used but still great for the students at South Garner.

“They were like brand-new, really awesome,” Walls said. “So the good things that she’s done for us ... have definitely helped our program. And I would definitely credit her with helping me grow my program here. Last year, we had seven girls, and this year, as I go into my women’s season, we have about 30 girls that are interested in tennis.”

Walls uses the same gear for his boys' program.

“Every single boy that stepped foot on that court had probably never held a racket before,” he said.

Victoria Ferrer in Cicero, Illinois, couldn't afford the nearly $300 for soccer jerseys, shorts and socks. She had been reusing old socks and shorts. Enter Potkey.

“Especially right now during hard times, it was really a great help from the organization,” Ferrer said. "And it motivates me even more knowing that I have others supporting me in my soccer career and just having this makes me want to work hard and make it worth it.”

Potkey has gear stacking up in a spare bedroom at her house, with the coronavirus pandemic making it tough to get everything sent out as fast as she'd like. She tries to mail items as quickly as possible — even delivering herself whenever possible to save on shipping.

The goal is growing Goods4Greatness enough to make it Potkey's full-time focus.

“I wish that this was something where I could just do it 24 hours a day," she said, “because I feel like there’s so much more need that I could help.”