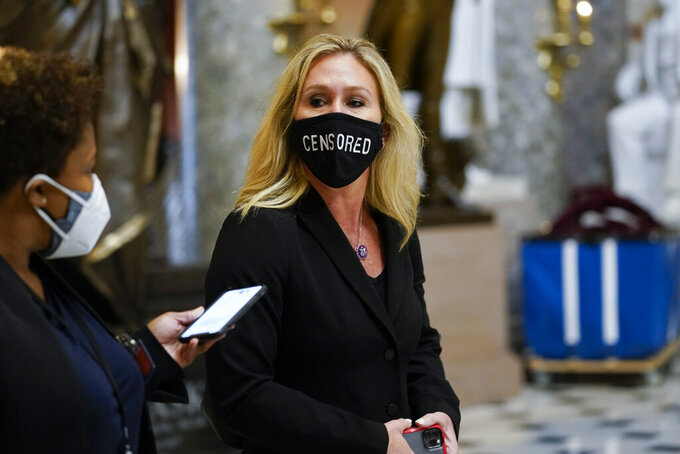 ATLANTA (AP) — Two journalists were kicked out of a public town hall event and threatened with arrest for trying to ask a question of Republican U.S. Rep. Marjorie Taylor Greene, who has come under heavy criticism for supporting social media posts that advocated violence against Democratic officials.

The journalists from WRCB-TV were invited to attend the Wednesday event in Dalton, Georgia, and were given credentials for it, Callie Starnes, WRCB-TV’s news director, told The Associated Press.

“Once we arrived we were told we were not allowed to speak to guests or the congresswoman,” the reporter, Meredith Aldis, said on the station’s broadcast Wednesday night.

In a video posted online by the Chattanooga, Tennessee-based news station, the reporter can be heard starting to ask Greene a question when the congresswoman stops her and says, “I’m talking to my constituents.”

A staffer from Greene’s office then approaches the reporter and tells her to leave, before he calls over a sheriff’s deputy.

The deputy accuses the reporter of “criminally trespassing” and says: “If you don’t leave you’re going to go to jail.”

Starnes said Aldis was asking Greene about her social media posts and calls for her to be expelled from Congress because of them.

Nick Dyer, a spokesman for Greene, said in an email: “This was a town hall for constituents. Not a press conference. Every attendee (besides media) was allowed to ask a question and Congresswoman Greene answered every question.”

Greene, who was sworn in to office earlier this month, represents northwest Georgia’s 14th Congressional District. Throughout her campaign last year, she sought to tightly control news media coverage, often not allowing certain news organizations to attend events and giving interviews only sparingly.

A die-hard supporter of former President Donald Trump, Greene has a long history of incendiary social media posts — including ones in which she expressed racist views and support for QAnon conspiracy theories, which focus on the debunked belief that top Democrats are involved in child sex trafficking, Satan worship and cannibalism. Most of her pronouncements were reported publicly before she won her Republican primary in August and the general election in November.

Greene has also spread false claims about the integrity of November’s presidential election — repeating Trump's baseless allegations of fraud — and railed against public health requirements implemented to slow the spread of the coronavirus. And in social media posts reported by Media Matters for America, a liberal watchdog group, Greene pushed conspiracy theories or “liked” posts that challenged the veracity of mass shootings at schools in Newtown, Connecticut, and Parkland, Florida.

A report from CNN published earlier this week surfaced social media activity where Greene showed support for Facebook posts that advocated violence against Democrats and the FBI, including posts that called for the death of House Speaker Nancy Pelosi and former President Barack Obama.

That’s led to another round of strong condemnation from Democrats and even some fellow Republicans.

Pelosi excoriated House Republican leaders Thursday for appointing Greene to the chamber’s education committee, saying that Greene had “mocked the killing of little children,” a reference to the shooting at a Newtown elementary school.

A spokesman for House Republican leader Kevin McCarthy said in a statement to Axios that the posts were “deeply disturbing” and said McCarthy would “have a conversation” with Greene about them.