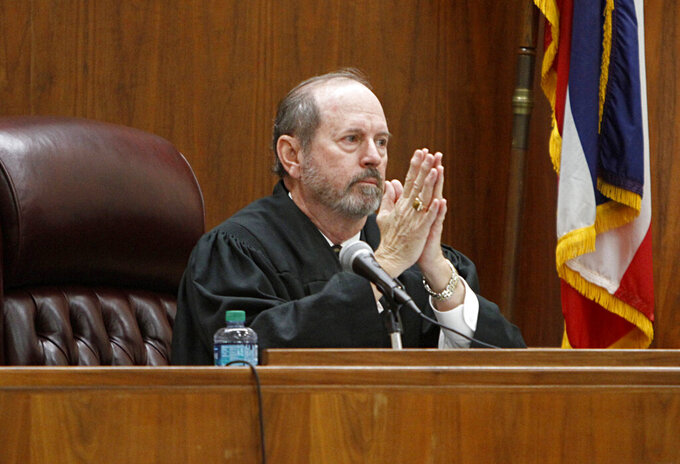 Retired Hinds County Circuit Judge L. Breland Hilburn, is photographed June 12, 2015, presiding at a trial in Pascagoula, Miss. Hilburn was 79 when he died April 5, 2021, at University of Mississippi Medical Center of complications from COVID-19. Hilburn in 1994 handed down a life sentence to the white supremacist convicted of killing civil rights leader Medgar Evers. (Tim Isbell/The Sun Herald, via AP)

JACKSON, Miss. (AP) — A private funeral will be held Friday for the Mississippi judge who handed down a life sentence to the white supremacist convicted of killing civil rights leader Medgar Evers.

Retired Hinds County Circuit Court Judge L. Breland Hilburn died Monday at the University of Mississippi Medical Center of complications from COVID-19, according to a news release from the state Administrative Office of Courts. He was 79.

The Mississippi NAACP leader was shot to death in his own driveway shortly after midnight on June 12, 1963, while his wife and their three small children were inside the home in Jackson. President John F. Kennedy had given a televised speech about civil rights hours earlier. Prosecutors said Beckwith staked out the Evers home, waiting across the street to assassinate the World War II veteran.

Two all-white juries tried Beckwith in the 1960s, but they deadlocked and mistrials were declared. The case was reopened in the early 1990s after new witnesses came forward. In 1994, an integrated jury convicted Beckwith of murder, and Hilburn sentenced him to life in prison. Beckwith died in prison in 2001.

Hilburn retired May 31, 2002, after spending 30 years as a city, county or circuit judge. He continued working part-time in retirement as senior status judge until 2017 — a position appointed by the state Supreme Court. In that role, Hilburn helped Hinds County deal with a long criminal docket when the jail was crowded with pretrial detainees.

William Gowan, another retired Hinds County circuit judge who has worked as a senior status judge, said in the state courts' news release that Hilburn was “a public servant who could identify with the public.”

“He never tried to impress people with being a judge,” Gowan said.