Judge orders US to stop detaining migrant children in hotels 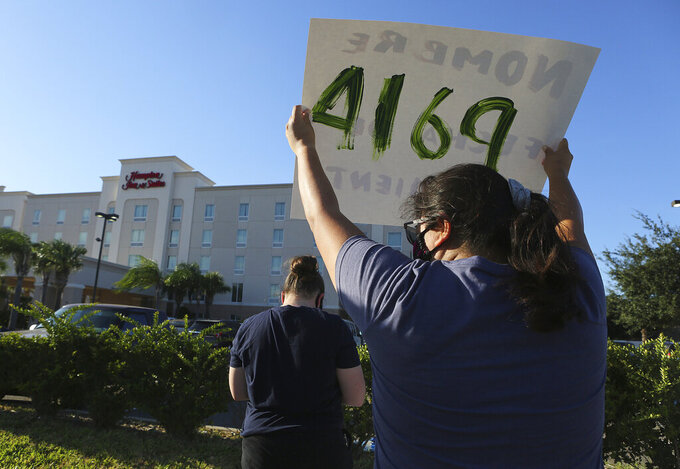 FILE - In this July 23, 2020, file photo, protesters wave signs in front of the Hampton Inn hotel in McAllen, Texas. The Trump administration has sharply increased its use of hotels to detain immigrant children as young as 1 before expelling them from the United States during the coronavirus pandemic despite facing outcry from lawmakers and human-rights advocates. (Joel Martinez/The Monitor via AP, File)

HOUSTON (AP) — A federal judge ordered the Trump administration on Friday to stop detaining immigrant children in hotels before expelling them from the United States, saying the much-criticized practice skirted “fundamental humanitarian protections."

U.S. District Judge Dolly Gee ruled that the use of hotels as long-term detention spaces violates a two-decade-old settlement governing the treatment of immigrant children in custody. She ordered border agencies to stop placing children in hotels by Sept. 15 and to remove children from hotels as soon as possible.

Immigration agencies since March have expelled 148,000 people crossing the U.S.-Mexico border under an emergency declaration citing the pandemic. The Trump administration says people crossing the border without authorization threaten public health and must quickly be forced out of the country. Advocates for immigrants argue the administration is using the pandemic as a pretext to sidestep federal anti-trafficking laws and asylum protections.

To prevent them from being allowed to stay in the U.S., the Trump administration has taken at least 577 unaccompanied children to hotels since March, where they are detained and then typically placed on deportation flights. Most of the children have been placed in Hampton Inn & Suites hotels — two in Texas, one in Arizona.

That's instead of sending them to shelters operated by the Department of Health and Human Services, where minors receive legal services, education, and the chance to be placed with relatives living in the U.S. Those facilities are licensed by the states where they are located. More than 13,000 beds in HHS facilities are currently empty.

Gee's order directs the Trump administration to resume sending unaccompanied children to HHS, and it also applies to children with parents who crossed the border without authorization. It also gives lawyers who work with immigrant youths access to the children that the government is trying to expel under the emergency declaration. Separately, legal groups have sued the U.S. to prevent the expulsions of immigrant children altogether.

The government “cannot seriously argue in good faith that flouting their contractual obligation to place minors in licensed programs is necessary to mitigate the spread of COVID-19,” Gee wrote.

Hotels can still be used for one- or two-night stays as part of travel between different places, she said.

The Justice Department did not immediately comment Friday, but government lawyers indicated that they would consider an appeal.

Private contractors at the hotels monitor detained children and families around the clock and generally don’t allow people to leave their rooms. Families that have been detained in the hotels have told The Associated Press that they are served regular meals, but that the telephones have been removed from their rooms.

One father from Haiti alleged that before his family was taken from their room, a contractor gave him and his wife ice to swallow and to feed to their infant daughter, in case their temperatures were checked before boarding a flight. They were expelled to Haiti without the chance to request asylum.

U.S. Immigration and Customs Enforcement denied using ice as an artificial cooling measure. It has described the contractors from MVM Inc., as “transportation specialists” who “ensure each minor remains safe and secure while in this temporary housing.”

The Trump administration has argued that Gee doesn't have the authority to stop the use of hotels because the children it is expelling fall outside a longstanding court settlement known as the Flores agreement. It has previously appealed several of Gee's rulings targeting detention practices.

Leecia Welch, an attorney at the National Center for Youth Law, called the ruling “a resounding victory for immigrant children.”

“The government’s attempt to use the pandemic as a subterfuge to carry out its ruthless immigration agenda clearly violates the rule of law and human decency,” Welch said.