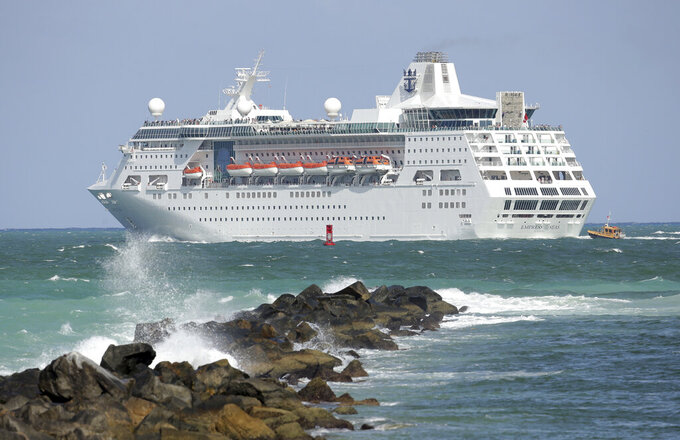 FILE - In this June 20, 2016 file photo, the Royal Caribbean cruise ship Empress of the Seas heads out of PortMiami, in Miami Beach, Fla. A federal judge has ruled for Florida in a lawsuit challenging the U.S. Centers for Disease Control and Prevention order making it difficult for cruise ships to sail due to the coronavirus pandemic. U.S. District Judge Steven Merryday wrote in a 124-page decision Friday, June 18, 2021 that Florida would be harmed if the CDC order effectively blocking most cruises were to continue.(AP Photo/Lynne Sladky, File)

ST. PETERSBURG, Fla. (AP) — A federal judge on Friday ruled for Florida in a lawsuit challenging a U.S. Centers for Disease Control and Prevention order making it difficult for cruise ships to resume sailing due to the coronavirus pandemic.

U.S. District Judge Steven Merryday wrote in a 124-page decision that Florida would be harmed if the CDC order, which the state said effectively blocked most cruises, were to continue.

The Tampa-based judge granted a preliminary injunction that prevents the CDC from enforcing the order pending further legal action on a broader Florida lawsuit.

“This order finds that Florida is highly likely to prevail on the merits of the claim that CDC's conditional sailing order and the implementing orders exceed the authority delegated to the CDC," Merryday wrote.

“Today’s ruling is a victory for the hardworking Floridians whose livelihoods depend on the cruise industry,” said Moody, a Republican. “The federal government does not, nor should it ever, have the authority to single out and lock down an entire industry indefinitely.”

While the CDC could appeal, Merryday ordered both sides to return to mediation to attempt to work out a full solution — a previous attempt failed — and said the CDC could fashion a modification in which it would retain some public health authority.

The CDC first flatly halted cruise ships from sailing in March 2020 in response to the coronavirus pandemic, which had affected passengers and crew on numerous ships. Then the CDC on Oct. 30 of last year imposed a four-phase conditional framework it said would allow the industry to gradually resume operations if certain thresholds were met.

Republican Gov. Ron DeSantis said in a statement that framework imposed onerous bureaucratic requirements on the industry, such as requiring a “vaccine passport” for passengers and that cruise ships conduct a simulated voyage before embarking passengers.

“The CDC has been wrong all along, and they knew it,” DeSantis said.

Laziza Lambert, spokeswoman for the Cruise Lines International Association, said the trade group was reviewing the ruling and what it means for resuming cruises from U.S. ports. Carnival Corp. said it too was reviewing the decision.

“The health and safety of cruise passengers, crew and the communities we visit remains the top priority for CLIA cruise line members, and cruise ships are well on their way to offering the traveling public a high level of COVID-19 mitigation,” Lambert said in a statement.

Cruise lines such as Royal Caribbean have been gearing up to return to sailing under the CDC's four-part framework. Merryday's decision means the CDC can't enforce those rules for Florida-based ships and that they would merely be considered nonbinding recommendations or guidelines.

However, Merryday delayed the effect of his order until just after midnight on July 18.

This would be similar to CDC guidelines for the reopening of other industries such as airlines, casinos, hotels, sports venues and subways, Merryday wrote. Otherwise, the cruise industry would face a daunting task to restart operations.

“Florida persuasively claims that the conditional sailing order will shut down most cruises through the summer and perhaps much longer,” the judge wrote, adding that Florida “faces an increasingly threatening and imminent prospect that the cruise industry will depart the state.”