Judge says couple to face trial together over missing kids 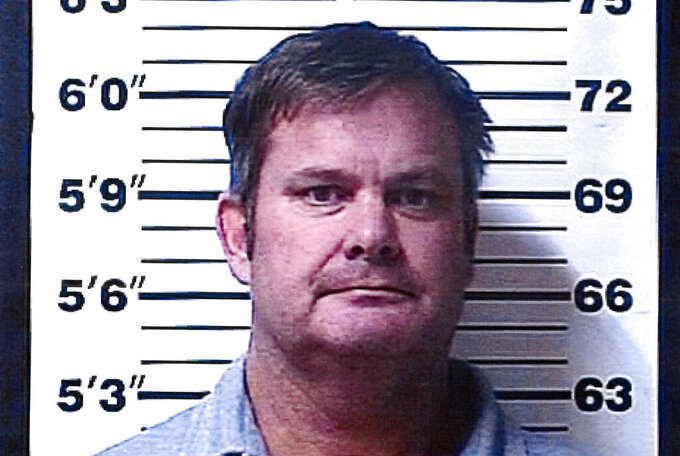 FILE - This file booking photo provided by the Rexburg, Idaho, Police Department shows Chad Daybell, who was arrested Tuesday, June 9, 2020, on suspicion of concealing or destroying evidence after local and federal investigators searched his property, according to the Fremont County Sheriff's Office. An Idaho judge says Daybell and his wife charged with conspiring to hide the bodies of her two missing children will stand trial together, rather than having two separate cases. Judge Steven Boyce also said Thursday, Oct. 29, 2020, that the Daybell's attorneys could ask to have the cases severed in the future if they feel their clients won't get fair treatment in a joint proceeding. (Rexburg Police Department via AP, File)

BOISE, Idaho (AP) — A couple charged with conspiring to hide the bodies of two missing children in a case connected to the parents' doomsday beliefs and the mysterious deaths of their previous spouses will stand trial together, an Idaho judge said Thursday.

But attorneys for Chad and Lori Daybell could ask to have the cases split in the future if they feel their clients won't get fair treatment in a joint trial, Judge Steven Boyce said.

Prosecutors say the Daybells conspired to hide or destroy the bodies of Lori's children, 7-year-old Joshua “JJ” Vallow and 17-year-old Tylee Ryan. The two kids had been missing since September, and investigators found their remains buried on Chad Daybell's rural Idaho property on June 9.

Investigators said the couple lied to police about the children's whereabouts but haven't said how they believe the children died. The Daybells have pleaded not guilty to conspiracy charges.

During Thursday's hearing, Madison County Prosecutor Rob Wood noted that state law allows defendants to be tried together when they’re accused in the same conspiracy. Wood said one court case would be easier for the state to manage and prevent witnesses and the children's families from having to make long trips to attend two trials.

The prosecutor said having two trials would dramatically increase the pretrial publicity for whoever is tried second, potentially making it difficult to find impartial jurors.

Chad Daybell’s attorney, John Prior, urged the judge to keep the cases separate or at least hold off on making the decision, arguing that linking the married couple together in one trial could create a “modicum of prejudice” in the eyes of the jury. Prior also said that convenience for the state or witnesses shouldn’t outweigh Daybell’s right to a fair, impartial trial.

The judge said several factors — including the difficulty of holding jury trials during the coronavirus pandemic — weighed in favor of his decision for one trial.

Chad Daybell had been scheduled for trial in January and Lori Daybell in late March, but those dates are likely to change.

The case spans several states and began in July 2019 — before Lori and Chad Daybell were married — when Lori's brother shot and killed her estranged husband, Charles Vallow, in suburban Phoenix. The brother, Alex Cox, said the shooting was in self-defense. Vallow had been seeking a divorce, saying Lori believed she had become a god-like figure responsible for ushering in the biblical end times. Cox died in December of an apparent blood clot in his lung.

Shortly after Vallow’s death, Lori and the children moved to Idaho, where Chad Daybell lived. He ran a small publishing company, putting out many fiction books he wrote about apocalyptic scenarios loosely based on the theology of The Church of Jesus Christ of Latter-day Saints. He also recorded podcasts about preparing for biblical end times, and friends said he claimed to be able to receive visions from “beyond the veil.”

He was married to Tammy Daybell, who died in her sleep last October of what her obituary said were natural causes. Authorities grew suspicious when Chad Daybell married Lori just two weeks later, and they had Tammy Daybell’s body exhumed in December. The results of that autopsy have not been released.

Police began searching for JJ and Tylee in November after relatives raised concerns. Police say the Daybells lied to investigators about the children’s whereabouts before quietly leaving Idaho. They were found in Hawaii months later.