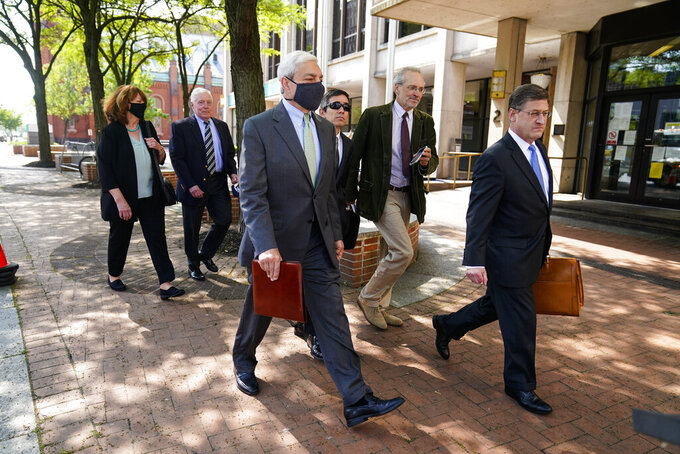 Former Penn State President Graham Spanier walks from the Dauphin County Courthouse in Harrisburg, Pa., after a hearing at Wednesday, May 26, 2021. A judge has upheld the jail sentence of Spanier who was forced out as the school's top administrator after Jerry Sandusky was arrested nearly a decade ago. The judge said Spanier must report to jail on July 9 to begin serving at least two months for endangering the welfare of children, followed by two months of house arrest. (AP Photo/Matt Rourke)

HARRISBURG, Pa. (AP) — The former Penn State president who was forced out as the school's top administrator when Jerry Sandusky was arrested a decade ago will soon have to report to jail after a judge on Wednesday upheld a sentence issued four years ago.

The judge ordered Graham Spanier to begin serving at least two months at the county jail several miles from the Penn State campus on July 9 — followed by two months of house arrest on electronic monitoring — for a single misdemeanor conviction of endangering the welfare of children.

Spanier was charged in 2012 and convicted by a jury in March 2017 but appeals had allowed him to stay out of jail.

He was convicted for his actions in response to reports from his aides that a graduate assistant football coach had complained of being greatly disturbed by coming across Sandusky showering alone with a boy in a team locker room in 2001.

“He made a mistake and he's going to pay for his mistake, but I don't consider him to be a danger to society as I would a criminal,” Judge John Boccabella said.

Spanier has said the abuse of the boy was characterized to him as horseplay. He and other top administrators did not notify police, and Spanier wrote in an email at the time that “the only downside for us is if the message isn’t ‘heard’ and acted upon, and we then become vulnerable for not having reported it.”

Spanier, 72, did not testify at his trial, but spoke at sentencing, telling the judge that he regretted not intervening more forcefully. He said little in the Harrisburg courtroom Wednesday, beyond telling Boccabella he remains a tenured faculty member. A university spokesperson this week described Spanier's status as being on administrative leave and not teaching classes.

Pennsylvania Attorney General Josh Shapiro issued a statement after the hearing referring to the consequences of failing to protect children.

“Today marks the end of a long road towards justice for the children endangered by Mr. Spanier’s inaction — choosing to cover up the abuse at the hands of Jerry Sandusky rather than reporting it to law enforcement,” Shapiro said.

Shapiro's office in January asked Boccabella to enforce the sentence after the 3rd U.S. Circuit Court of Appeals reversed a magistrate judge's decision that had thrown out Spanier's conviction and ordered a new trial.

“The victims of the defendant's crime do not believe that he's ever going to be held accountable for the crime he's been convicted of,” Schulte said before the judge announced his decision.

Spanier had open-heart surgery in September 2019 and has an advanced stage of prostate cancer, putting him at increased risk should he contract COVID-19, Spanier lawyer Sam Silver told the judge. Spanier is fully vaccinated, he said.

“We got here today and we are here today for one and only one reason, and that is the pandemic,” Silver said, noting the global health emergency has not ended. He said it was “blind to reality and callous” for state prosecutors to seek confinement.

“Fortunately, things are not as dire as they were a year ago,” Boccabella said.

Boccabella also imposed two years of probation, a $7,500 fine and 200 hours of community service. He authorized Spanier to participate in work release.

Sandusky was first charged in November 2011, and a few days later Spanier was out as university president.