Justice bets on economic promises in race against Salango 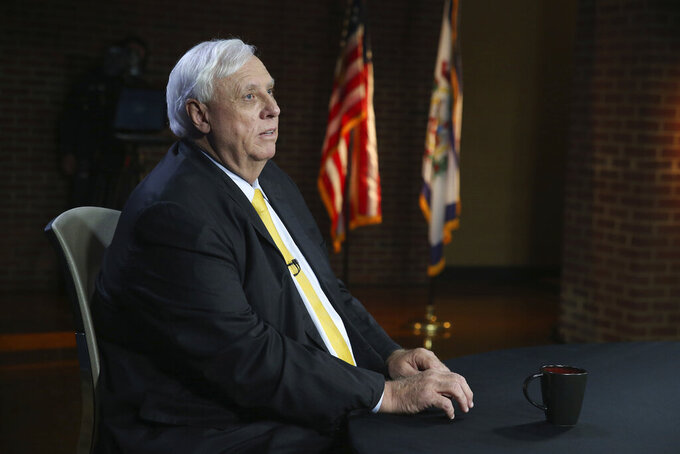 Never mind that coronavirus numbers are on the rise all over the state, turning more counties on his color-coded map red and orange. The criticisms that dogged him for much of his first term — that he was checked out on the job and had enriched himself and his businesses — Justice bets those are all a distant memory for voters.

“It’s hard to keep up with the announcements,” Justice riffed last Friday at the former Hobet mine in Boone County, a massive empty site in southern West Virginia that critics say Justice has neglected to redevelop.

The not-so-subliminal message behind his not-so-humble brag: he deserves another term for focusing on projects such as road repairs and economic development in a state that badly needs both.

He now plans to spend $40 million to build road access at the mine property. That news came three weeks after the state announced several hundred jobs would come to the state’s northeast to run testing grounds for a futuristic transportation technology called hyperloop. And then there's the road paving project Nitro, a town south of Charleston, that Justice celebrated in early October.

Justice's opponent, Democratic nominee Ben Salango, is betting that voters will see through the rush of press conferences. “We all know that many of his ‘announcements’ never materialize and that his election-year promises don’t hold water,” Salango tweeted.

Justice had confronted that criticism bluntly. “What do you want me to do? Just stop announcing?” he said at the mine site. Then, sneering at the notion that the avalanche of announcements is a victory lap timed to boost his reelection campaign, the governor deployed one of his many folksy phrases, calling the criticism “bullsnot.”

With campaigning curtailed due to the pandemic, Justice is banking on television ads and his alliance with President Donald Trump, who remains enormously popular in West Virginia, to secure a second and last term in office.

Salango, a Kanawha County commissioner, says he wants to attract foreign investment to the state and grow sports tourism. He also said he wants to give state teachers another raise and address perennial issues such as the lack of high-speed broadband access across large swaths of rural West Virginia.

But he admits that the challenge of gaining name recognition without large campaign events is formidable.

“One of the biggest problems is not being able to get out as much,” Salango, 47, said in an interview during a recent outdoor Democratic Party rally at a park in Charleston. He has still barnstormed the state, holding small outdoor events, even venturing at one point near Justice’s posh resort, the Greenbrier.

Justice, 68, a billionaire with businesses in coal, farming and hospitality, has been dogged by lawsuits levied against his personal companies. When he took office, Justice stopped short of putting his enterprises in a blind trust, calling it too complicated. He said his children would run his business empire.

He is running as a Republican for the first time, after winning as a Democrat in 2016. He switched party affiliation after seven months in office at a rally with Trump. Labor groups that endorsed his first run have largely abandoned him.

Some in the Republican party still question his conservative bona fides. He portrays himself as an outsider and often says, “we don’t need to be Democrats and Republicans.”

But he also relishes partisan attacks, portraying Salango as a puppet of national Democrats.

Salango said he has a shot even in a state expected to heavily favor Trump: “Even if they’re going to vote for Trump, when they get to the governor’s office, they look at who do they think is the best person for the job?”

“We’re confident they’re going to conclude it’s me,” he said.

Justice’s campaign declined an interview request with the candidate.

Salango supporters say they want to put a governor back in the mansion, a dig at Justice not living in the state capital of Charleston as the constitution seems to require, prompting a lawmaker two years ago to sue him. Justice lives in Lewisburg and has said people shouldn’t be preoccupied with where he sleeps at night. The case is still before the West Virginia Supreme Court.

During the pandemic, Justice has often delivered three press conferences a week, imploring more residents to wear masks and get tested and decrying the spread of the virus as “a crying shame." His color-coded state map showing the spread of the coronavirus in counties recently angered teachers' unions when he shifted the map’s metrics, with the aim of reopening some schools earlier.

“West Virginians recognize Governor Jim Justice’s experience and strong leadership throughout the COVID-19 pandemic,” the campaign said in a statement.

The residents surrounding the Hobet mine have long sought its redevelopment to lift up the region once flush with coal mining revenues.

Salango says Justice “pulled the plug” on the project, while Justice said that “it was not doable the day I walked into office.”

At his announcement, the governor said his Department of Commerce has made it a top priority.

“He took the first three years of his term off, and then because of the campaign, he's flown all over West Virginia,” Salango said. “Jim Justice has had four years to do something and he's literally done nothing.”