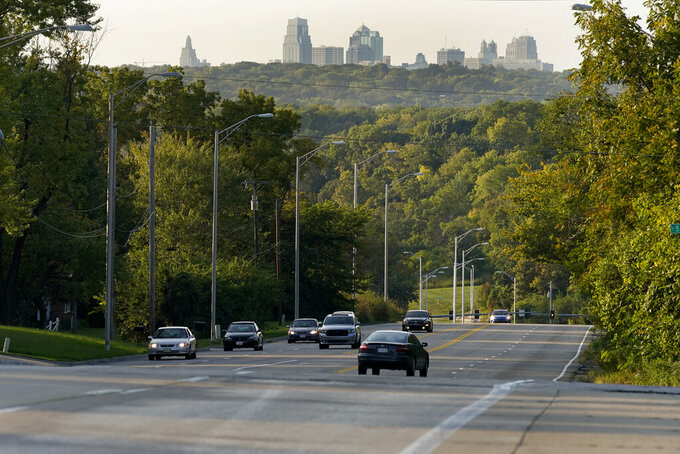 FILE - In this Sept. 24, 2020, file photo, cars travel on a stretch of Blue Parkway in Kansas City, Mo. After years of debate and a divisive election, Kansas City will soon have a street route named for Martin Luther King Jr., removing its designation as one of the largest city's in the U.S. to not have a street named for the civil rights icon. On Tuesday, April 13, 2021, the city's Board of Parks and Recreation approved a plan to name a 5-mile stretch that runs east to west for King, which includes Blue Parkway. (AP Photo/Charlie Riedel, File)

KANSAS CITY, Mo (AP) — After years of debate and a divisive election, Kansas City will soon have a street route named for Martin Luther King Jr., removing its designation as one of the largest cities in the U.S. without a street named for the civil rights icon.

The city's Board of Parks and Recreation on Tuesday unanimously approved a plan to name a 5-mile (8.05-kilometer) stretch along existing boulevards that runs east to west through the city for King.

It was the culmination of decades of work by civil rights activists, who celebrated Tuesday's vote along with Mayor Quinton Lucas and other city officials. Several speakers at a news conference vowed that naming a street for King was only the first step in work to improve race relations in the city and provide economic stimulus to struggling areas along the route.

“This isn't just a trivial street naming,” said parks board commissioner Chris Goode. “It's bigger, it's so much bigger. It was 53 years ago that Dr. King was slain... we still are seeing Black men slain in a very similar manner. So this isn't just another street name. This is a moment for us to come along side of each other."

Lucas said the city is determined to develop and improve the route to make the city's Martin Luther King Boulevard one of the finest in the country, with investments in businesses so people across the city feel a sense of belonging and equality.

The Rev. Vernon Howard, president of the Southern Christian Leadership Conference of Greater Kansas City, one of the primary forces behind the move to name a street for King, said Tuesday's vote was tied to other social justice issues promoted by King and his followers for decades.

“We must understand the connection between the renaming of this corridor and justice and peace and equity for all,” Howard said.

Civil rights activists thought they had achieved the goal of naming a street for King in January 2019 when one of the city’s prominent boulevards, The Paseo, was named for him. But some residents who objected gathered signatures to get the issue placed on a ballot and later in 2019 voters overwhelmingly chose to remove King’s name and return the street to The Paseo.

The effort to find a new street was slowed by the coronavirus pandemic and racial injustice protests in Kansas City in 2020, and the proposal approved Tuesday drew little vocal opposition during public meetings.

Derek Alderman, a geography professor at the University of Tennessee who has studied the naming of streets for Martin Luther King for decades, said naming a street for King is intimately connected to social justice issues that have received renewed attention during social justice demonstrations and the pandemic.

“Naming a street for Dr. King is not the same thing as demanding police reform or addressing the inequity in distributing vaccines or other inequity issues we're all discussing today. His name, his memory, is more than a symbol of remembering him, it's about carving out a sense of belonging and is definitely connected to larger issues.”

The new route runs along a continuous street that currently has three names, Volker Boulevard, Swope Parkway and Blue Parkway. It runs east to west from mostly Black eastern neighborhoods to more affluent neighborhoods to the west.

The parks board also approved resolutions Tuesday recommending the City Council change two sections along the route that are not part of the parks department’s jurisdiction.

The route also goes by Martin Luther King Square Park, which has received new attention since the 2019 vote. The park has begun construction on a state-of-the art playground funded in part by up to $1 million from Kansas City Chiefs quarterback Patrick Mahomes' 15 and Mahomies Foundation.

Terry Rynard, director of the parks department, said new signs along the route could begin going up within 2.5 weeks. She said the cost would be minimal because the city kept the signs made for the previous King Boulevard.

This story has been corrected to show the correct spelling of Terry Rynard's last name in final paragraph.