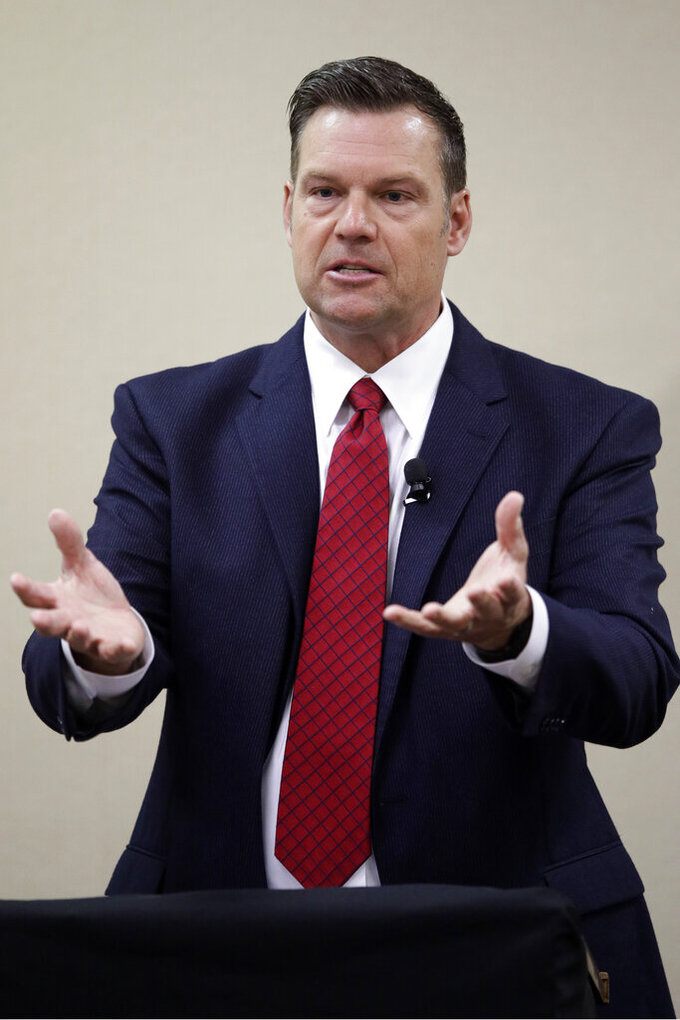 TOPEKA, Kan. (AP) — A western Kansas congressman who's been firming up Republican establishment support for his U.S. Senate bid came under attack during a Wednesday night debate over a 12-year-old misdemeanor criminal case and for missing votes while treating coronavirus patients.

Rep. Roger Marshall sought to portray his main GOP primary rival, immigration hardliner Kris Kobach, as an iffy prospect for the November general election. He was playing to many Republican leaders' fears that nominating Kobach will put a normally safe GOP seat in play and greatly complicate the party's effort to defend its Senate majority. Kobach, the former Kansas secretary of state, lost the 2018 governor's race after alienating independent and moderate Republican voters.

The debate, live-streamed from an arena in Wichita, came only two days after Marshall picked up the endorsement of the U.S. Chamber of Commerce. The two-term congressman already had the backing of other key groups, including the Kansas Farm Bureau and two major anti-abortion organizations, the National Right to Life Committee and Kansans for Life.

But Kobach and another GOP candidate, Dave Lindstrom, a businessman and former Kansas City Chiefs professional football player, raised their own questions about Marshall's viability by referring in their closing statements to a criminal case against Marshall arising from a confrontation with a fellow western Kansas resident in 2008.

Marshall had pleaded no contest to a misdemeanor reckless driving charge. Later, a local prosecutor who was the son of a Marshall business partner helped him get the charge reduced to a traffic infraction, court records show. Both Kobach and Lindstrom called it a “shady, backroom” deal.

Marshall's campaign dismissed the attacks as “playing games” and called the 2008 case a “frivolous traffic ticket.” Meanwhile, Marshall himself ignored the criticism and touted his work as a doctor who treated patients in coronavirus hotspots in Kansas City and southwest Kansas this spring. But Kobach criticized Marshall for missing two key votes on coronavirus relief measures, suggesting Marshall isn't willing enough to battle Democrats.

“He was here in Kansas doing a photo-op. Look, if you want to be a doctor, be a doctor. Go for it," Kobach said. “I would say if you're going to take this job, do the job — show up.”

Marshall, a longtime obstetrician, said he would always choose helping people over “going to D.C. and watching a vote that was all show, a big parade.”

“I guess this is just about as low as you can get for a failed candidate,” Marshall said of Kobach's attack.

A fourth Republican candidate, Kansas City-area plumbing company founder Bob Hamilton, has been running television ads for weeks touting himself as a Trump-like outsider. But he didn't participate in Wednesday night's debate because one of his daughters is getting married this week.

Republicans haven't lost a Senate race in Kansas since 1932. But they're spooked this year because presumed Democratic nominee state Sen. Barbara Bollier, a retired Kansas City-area doctor, raised nearly $3.5 million for her campaign by the end of March.

Kobach suggested the 2008 criminal case made Marshall vulnerable to attacks from Bollier and argued that his perceived negatives “have been out there for a long time.” Kobach said in his opening remarks that “there's a battle for the American soul."

His remark comes amid a national push to remove from public spaces Confederate symbols and statues honoring leaders of the pro-slavery South during the Civil War. It's become a part of protesters' response to the May 25 death of George Floyd, a Black man who died after a white Minneapolis police officer pressed his knee into Floyd's neck for nearly eight minutes during an arrest.

After the debate, Kobach told The Associated Press in a text message that he was referring to “monuments of American presidents” in Washington such as Andrew Jackson and Abraham Lincoln. A statue of Lincoln in a park has been criticized because it shows him standing over a freed but kneeling slave.

Asked about Kobach's remark, Marshall campaign spokesman Eric Pahls said the congressman “is absolutely against any vandalism, including against public property.