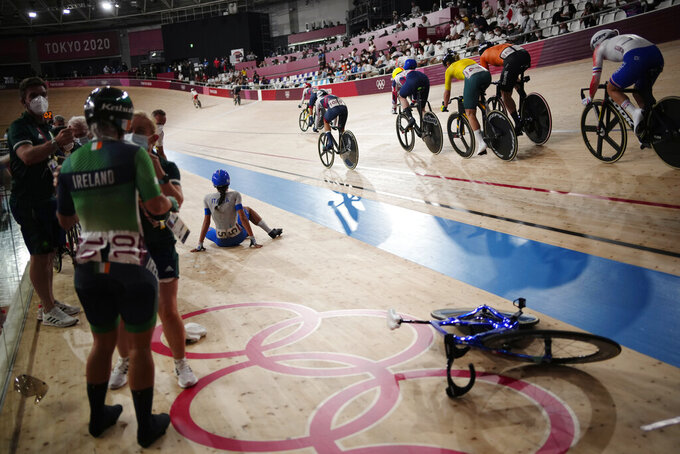 IZU, Japan (AP) — There was a moment when Laura Kenny, one of the most decorated track cyclists in Britain’s long history of champions, wondered whether she would ever put on a helmet and step into the pedals for another competitive race.

Kenny already had won four Olympic gold medals, a perfect record in her events. She had won enough world titles to fill a chest of drawers. And she was expecting her first child with her husband, fellow British cyclist Jason Kenny.

What did she really have left to prove?

“There was a moment two months into the pregnancy,” Laura Kenny acknowledged Friday night, “when I woke up and said to Jason, ‘I can’t do this. I’m not going to be able to carry on. There’s just no way.’”

Yet she found a way. And after winning a silver medal earlier in the Tokyo Games in team pursuit, Kenny added to her golden haul by teaming with Katie Archibald to win the Olympic debut of the women’s Madison in the Izu Velodrome.

“Here we are,” said Kenny, the first British woman to win gold at three Summer Games.

In the other final Friday, an all-Dutch showdown between the world’s two best sprinters, Harrie Lavreysen lost his first match against close friend Jeffrey Hoogland before taking the next two races and claiming the gold medal.

In the Madison, teams of two take the track at once but only one rider at a time is considered in the race. They are allowed to tag each other at any point in the 120-lap event, giving them an opportunity to slingshot their teammates ahead of their competition, and points are awarded for the top four finishers each 10 laps.

There are also 20 bonus points awarded when a team gains a lap on the rest of the field, and that’s where the medalists separated themselves. They worked together late in the race to put everyone else a lap behind them.

Kenny and Archibald’s real dominance, though, came in the sprints. The British pair won 10 of the 12 opportunities to earn points, including the final sprint worth double points — Kenny was so far ahead of the field that she was able to throw her right fist into the air in celebration of her fifth Olympic gold medal and sixth overall.

It was Archibald’s second gold medal and third overall with the other two medals coming in team pursuit.

“We were really strict in our approach,” Archibald said. “We’ve been playing around with what we think our game plan would be for this race for a while. Any time we kind of varied from our skillset, it went wrong.”

Britain ended up with 78 points. The Danish pair of Amalie Dideriksen and Julie Leth earned 35 points to take the silver medal and the Russian duo of Gulnaz Khatuntseva and Marila Novolodskaia had 26 points for bronze.

“It’s very difficult to make a strategy in this race. It’s all about collaborating and supporting each other,” Khatuntseva said. “We found a good balance between sprinting and having a good break."

It was a rough event for the two-time defending world champions from the Netherlands and medal favorite Belgium. The Dutch and Belgians were involved in a crash on Lap 71, and the Belgians crashed again later in the race.

Things went better for the Netherlands in the men’s sprint, where an all-Dutch final seemed a foregone conclusion after qualifying. Lavreysen and Hoogland roared to the Olympic record over 200 meters with a time that was the exact same down to the thousandth of a second, putting them on opposite sides of the bracket.

Hoogland first had to dispatch reigning silver medalist Denis Dmitriev in the semifinals. He stalked the Russian in both of their heats, and both times Hoogland pulled ahead on the backstretch before holding Dmitriev off at the finish.

Lavreysen also advanced without needing a deciding third race against Britain’s Jack Carlin. Lavreysen cruised to an easy win in their first race, then won a tense cat-and-mouse game to take their second race.

In the finals, Hoogland went to the lead to begin the last of three laps, forcing Lavreysen to go the long way around the track on the outside and keeping his teammate from pulling ahead at the finish line.

Their second race looked as if it would mirror the first, only this time Lavreysen had enough in his legs to finish the job, and the decider wasn’t really close as he powered his way to the gold medal.

It was the second of the Games for Lavreysen, who joined Hoogland in helping the Netherlands win the team sprint gold.

In the bronze medal match, Carlin needed just two races to beat Dmitriev, the silver medalist from the Rio Games.

Earlier in the program, the women’s sprint began with the Olympic record falling three times in qualifying. Germany’s Lea Sophia Friedrich’s blistering time of 10.310 seconds over 200 meters equated to an average speed of 43.4 mph.

None of the medal contenders failed to advance to Saturday’s heats. That includes Friedrich, world champion Emma Hinze of Germany and Shanne Braspennincx, who won the Olympic gold medal in Thursday’s keirin.