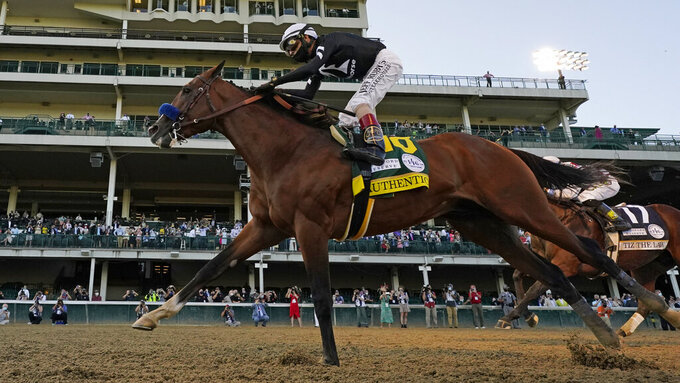 FILE - In this Sept. 5, 2020, file photo, Authentic crosses the finish line with jockey John Velazquez to win the Kentucky Derby horse race at Churchill Downs in Louisville, Ky. Authentic was honored as Horse of the Year at the 50th annual Eclipse Awards on Thursday night, Jan. 28. The ceremony was held virtually because of the coronavirus pandemic.(AP Photo/Jeff Roberson, File)

Kentucky Derby and Breeders’ Cup Classic winner Authentic was honored as Horse of the Year at the 50th annual Eclipse Awards on Thursday night.

The ceremony was held virtually because of the coronavirus pandemic.

Authentic received 224 out of 238 first-place votes. Monomoy Girl received seven votes. Swiss Skydiver, the filly who beat Authentic by a neck in the Preakness, finished third with six votes. Vekoma received one vote.

Another Baffert-trained colt, Improbable, won the Eclipse for older dirt male. A third Baffert trainee, 3-year-old Gamine, was honored as female sprinter of the year.

Baffert was nominated for trainer of the year, but lost to Brad Cox. Other human winners were: Irad Ortiz Jr. as jockey of the year; Alexander Crispin as apprentice jockey; Godolphin as owner of the year; WinStar Farm as the year’s top breeder.

The awards are voted on by the Daily Racing Form, members of the National Turf Writers and Broadcasters and the National Thoroughbred Racing Association.