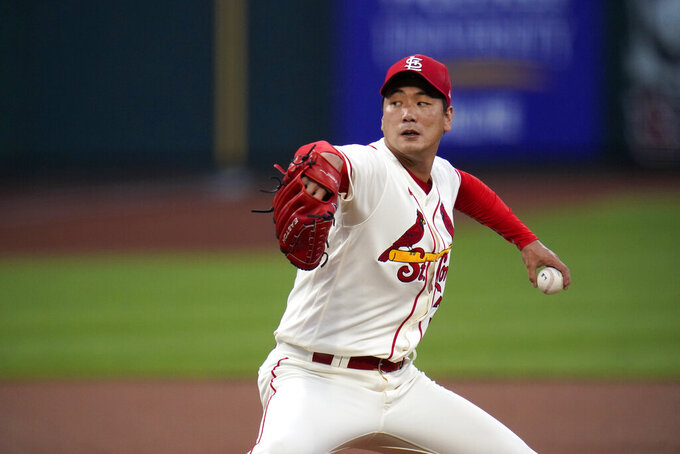 Kim gave up three hits, walked none and struck out three. This was his third game for St. Louis and second start.

“This is something that I dreamed of from when I was child,” Kim said through an interpreter. “And so, it’s been it’s been a long time, but I made my dream come true. So, it’s one of those nights that I cannot forget.”

The 32-year-old left-hander signed with the Cardinals in the winter after going 136-77 over 12 seasons in South Korea.

Kim’s journey to his first major league win wasn’t easy. When spring training was halted in March because of the virus outbreak, his family couldn't leave South Korea for a planned visit to the United States.

Once baseball resumed, he was relegated to the bullpen before injuries moved him back into the rotation. But before he could make a start, the team had to sit out for two weeks due to a COVID-19 outbreak within the club.

“I had no walks allowed so that’s one thing I really think it was great,” Kim said. “But I need to still improve. For example, there were some full counts. So, for next time I need to improve to be more aggressive.”

Cincinnati’s bats struggled for a second straight night. The Reds totaled only four hits after getting just two in a win the previous day at Busch Stadium.

“I hate to take anything away from their pitcher,” Reds manager David Bell said. “There’s no question he did his job and got outs, which is the name of the game. But we were squaring balls up and they were in great position all night, so give their defense credit.”

Harrison Bader homered on Wade Miley’s first pitch of the fifth inning to give the Cardinals a 3-0 lead. The homer snapped a season-long homerless streak of 39 1/3 innings by Reds pitching.

“I really do believe that on defense you know you’re totally a reflection of your starting pitcher’s pace,” the center fielder said. “He just he just had an incredible night, so playing behind that man, it’s a lot of fun.”

Tommy Edman’s two-run single put the Cardinals ahead in the third.

Miley (0-3) gave up three runs in a season-high five innings. He had failed to survive the second inning in his first two starts.

Reds: IF Mike Moustakas was not in the lineup as he still works his way back from a left quad injury. Bell said it was a routine day of rest for Moustakas after he played four games in three days after returning from the injured list and that the injury may linger for the rest of the season.

Cardinals: RHP Daniel Ponce de Leon (0-2, 6.14 ERA) he hasn’t received a single run of support in either of his first two starts.