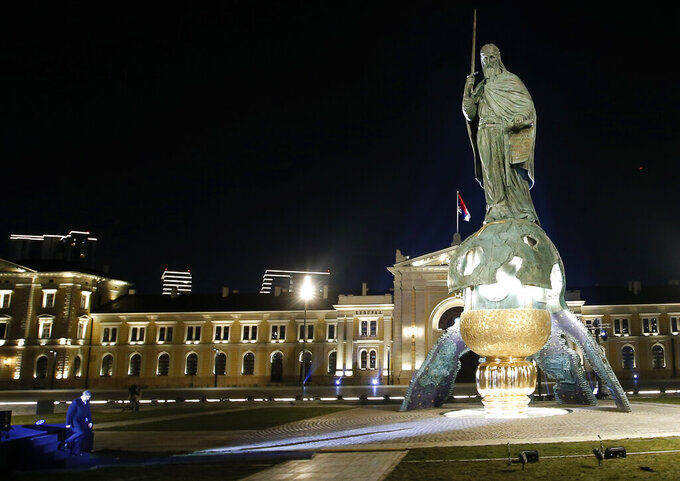 Serbian President Aleksandar Vucic walks past a 23-meter-high, 70-ton bronze sculpture of the legendary founder of the Serbian state, Stefan Nemanja, during the unveiling ceremony in Belgrade, Serbia, Wednesday, Jan. 27, 2021. President Aleksandar Vucic's allies say the bronze sculpture of Stefan Nemanja will be a new landmark of the Serbian capital. Opponents think the monument is a megalomaniac and pricy token of Vucic's populist and autocratic rule that should be removed. (AP Photo/Darko Vojinovic)

BELGRADE, Serbia (AP) — Kitsch or an extraordinary piece of art? Depends on who you ask.

Serbia’s president attended the unveiling on Wednesday night of a grandiose monument to a medieval monk and historic ruler which has come under fire from critics who call it oversized and kitschy.

President Aleksandar Vucic’s allies say the 23-meter-high (75-foot-high), 70-ton bronze sculpture of the legendary founder of the Serbian state, Stefan Nemanja, placed on a gilded egg-shaped pedestal in downtown Belgrade will be a new landmark of the Serbian capital.

Opponents think the monument is a megalomaniacal and pricy token of Vucic’s populist and autocratic rule that should be removed.

Vucic told a crowd of several thousand of his supporters, who kept no social distancing amid the coronavirus pandemic, that “the beautiful” statue represents an “art masterpiece” which is a symbol of the Serbian statehood and unity.

He said that all those who “dream of removing it” will not succeed because it represents “the anchor of the whole Serbian nation.”

Social media commentators have named the sculpture “Saruman on a Kinder Egg” and critics said the sculpture made and designed in Russia is inconsistent with traditional Serbian architectural style and instead resembles Soviet-era mega-size monuments.

An independent Society of Serbian art conservators said the monument is an “ideological product of despotism” which has no connection with Serbia and Belgrade of the 21st century. Art historian Aida Corovic said it's not a monument to Stefan Nemanja but to Vucic’s “arrogance.”

Belgrade’s deputy mayor, Goran Vesic, rejected the criticism, saying the once rundown part of the city “is becoming one of the most beautiful places in the capital” and a new center of the city.

The monument was placed on a renovated square in front of Belgrade’s old railway station. It is a part of the Belgrade Waterfront project financed by a United Arab Emirates company that includes Dubai-style shopping malls and high-rise buildings.

The building of the monument has often been compared by critics to a hotly disputed revamp of Macedonia’s capital, Skopje, earlier in the 2000s that included dozens of monuments and sculptures which have earned it nickname “the kitsch capital of the Balkans.”

Both projects became synonymous with secretive and reckless spending. The price paid to the Russian sculptor for the monument has been proclaimed a state secret, but independent estimates range to around 9 million euros ($11 million.)