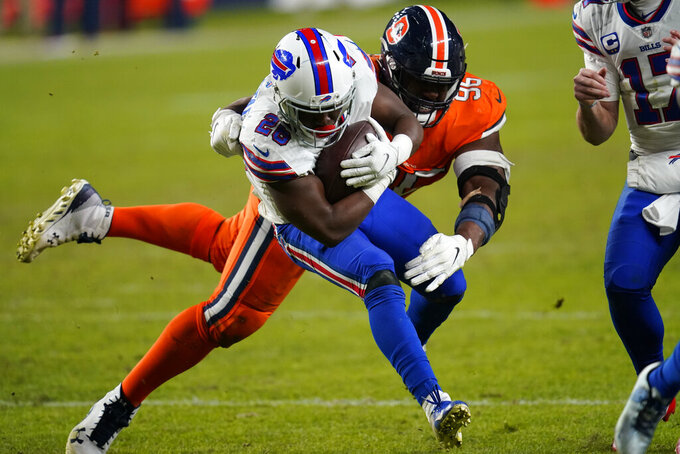 ENGLEWOOD, Colo. (AP) — Shelby Harris’ best and most eventful season came to an early end Thursday when the Denver Broncos placed the sixth-year defensive end on injured reserve with a knee injury.

The Broncos (5-10) activated tight end Jake Butt (hamstring) off IR for their finale against the Las Vegas Raiders (7-8) on Sunday.

In 11 games this season, Harris led all NFL defensive linemen with seven pass knockdowns. Since 2019, Harris leads all D-linemen with 16 passes defensed, five more than runner-up Carlos Dunlap with Cincinnati and Seattle.

Harris missed four games this year when he was battling the coronavirus that also infected members of his family.

Coach Vic Fangio said he wasn’t sure if Harris, who is set to become an unrestricted free agent after the season, will require knee surgery.

Harris was in Los Angeles for the Broncos’ game against the Chargers last week when he was awakened by word that his wife was in labor. He stayed for the game and the Broncos arranged for a private flight back to Denver. He left right after the Broncos' 19-16 loss and got back hours before the team plane did.

“My wife and baby are good. It’s just crazy because I actually got to get home for the birth, and I cut the umbilical cord and everything, I pulled the baby out,” Harris said earlier this week. “It was just a real special moment. We named him — he’s a junior — Shelby Lamar Harris Jr.

“It’s just crazy. I truly want to thank the Broncos just for going over and beyond what they had to do to make sure I got back and was there for the birth. It really meant a lot to me and my family and we’ll forever be grateful.”

It’s not just the Broncos he appreciates.

“I ran into the locker room, instantly got undressed. I’d say that’s probably the quickest I’ve ever gotten changed. I was still sweating when we left,” Harris said. “It was really classy by Inglewood police and all the sheriffs out there because they gave us a police escort to the airport. I really just feel special because everybody went over and beyond what they really had to do.”