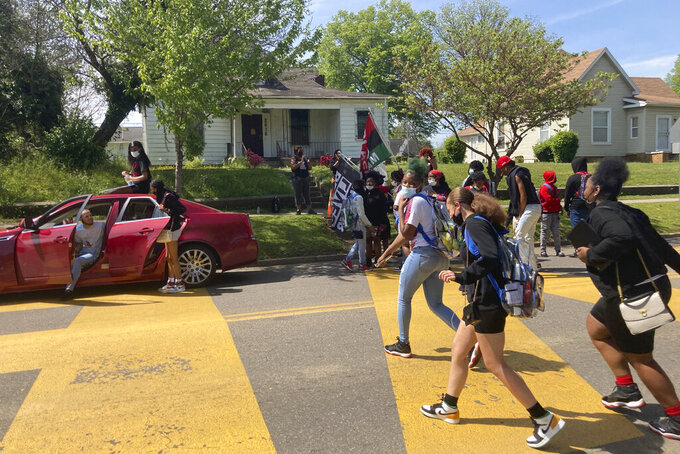 In this April 27, 2021 photo, students walk out of school at Austin-East Magnet High School in Knoxville, Tenn. Members of the Black community in Knoxville, Tennessee, are calling for reforms to dispel longstanding disparities between Blacks and whites. They say that is one of the steps that needs to be taken to reduce increasing violence that has claimed the lives of five high school-age students this year. (AP Photo/Kimberlee Kruesi)

But in a flash, a police officer had shot and killed 17-year-old Anthony Thompson Jr. during a short struggle after authorities say a handgun Thompson was carrying went off and struck a trash can. As Thompson lay on the school bathroom floor with officers on top of him, another student — who also had been shoved to the ground and handcuffed — screamed, "What are you all doing?”

The April 12 fatal shooting took place at Austin-East High School, an arts magnet school nestled inside a quiet Knoxville neighborhood near the zoo. A funeral home sits directly across the street. Painted prominently on the road separating the two buildings are the words “Black Lives Matter.”

The majority-Black student population had already been grappling with the deaths of four students in gun violence since January, all of which took place outside of school and none of which involved police officers.

The students "have dealt with a lot of loss,” said Breyauna Holloway, who has two children attending the school. “They’re here one day and literally the next, they’re gone.”

The police body camera video, released under public pressure more than a week after Thompson's death, hasn't helped ease the growing angst surrounding law enforcement officials' response to the shooting. If anything, the questions have gotten more pointed.

“If Anthony Thompson was white, he would still be here. And that's where the anger comes from,” said Knox County Commissioner Dasha Lundy, the only Black member on the 11-person board, who has advocated for better communications between the police and the Black community. “There had to be something to save his life."

In the weeks following Thompson's death, Austin-East students, families and others have taken to the streets to voice their outrage over the local district attorney's conclusion that the officers' actions were justified. They also are calling for reforms in the city to address what they say are longstanding disparities between Blacks and whites in Knoxville, in such areas as education, security and mental health services.

The protests have received mixed responses. Nearly 50 Knox County sheriff's deputies were called in last month to guard a recent meeting because of fears demonstrators would try to shut it down.

Exasperated leaders of the Black community noted that no deputies were called when mostly white protesters disrupted public meetings over the past year to fight the county's mask mandate during the coronavirus pandemic.

Yet on Wednesday, Knoxville Mayor Indya Kincannon announced that the city would reevaluate law enforcement's role inside the schools. She stressed that such a review didn't necessarily mean that officers would be pulled out of schools, however.

Meanwhile, District Attorney Charme Allen, who is white, has maintained that the officers' actions were legal under Tennessee's self-defense law and that she wouldn't charge any of the four involved.

The officers responded to the emergency call just before school was to let out for the day. Police had received a domestic abuse call from the mother of Thompson’s former girlfriend and were looking for him. Allen’s office said the officers did not know Thompson was carrying a handgun when they found him in the school bathroom.

Less than 15 seconds later, the student was dead. Body camera video shows an officer grabbing Thompson's right arm. Thompson's left hand is still in his sweatshirt pocket, where the barrel of a handgun can be seen peeking out. The gun goes off, hitting a trash can.

Allen said the shot surprised officers and led them to believe their lives were in danger, which is when Knoxville police Officer Jonathon Clabough fatally shot Thompson.

In late January, police found Justin Taylor, 15, in a car where they say a 17-year-old boy shot and killed him from the backseat.

“I think that this city is reeling,” Allen said. “I think that the fact we’ve had five deaths of high school students means that clearly somewhere, something is wrong. It’s unacceptable.”

The release of video footage from the school shooting has sparked demonstrations: Protesters have taken to the streets; students have conducted walkouts while wearing red and black T-shirts with pictures of Thompson on them; and activists have attended public meetings to call for action from their local leaders.

Inside the school, the bathroom where Thompson was killed has been decorated with flowers and pictures of him. Outside, students pause to rearrange flowers and candles at a memorial near the front doors before going to class.

School officials have offered counseling and have increased security measures. They implemented a a clear-plastic backpack policy in March after the first few student deaths occurred, screen students with metal detector wands and have added more security personnel. Yet many students remain shaken and struggle to process the violence that's taken place, both inside and outside of the school.

“Well ... we tried school but my daughter just couldn’t make it. We had to pick her up early,” Octavia Harper, mother of two Austin-East students, wrote in a Facebook post a little more than a week after Thompson's shooting. “Not sure about tomorrow. ... (The) kids can’t handle this.”

Holloway worries about her children's mental health as they return to school and are forced to walk past the bathroom where Thompson was shot.

“We’re used to walking by scenes where people have been murdered, unfortunately," she said. "It’s just par for the course. You just get used to it. It’s almost just like driving past the grocery store on your way back home.”

Yet that may also be why Thompson's final appeal has struck a chord among those calling for change after the past few months of trauma. His words have sparked a hashtag, appeared on T-shirts and been made into signs protesters have carried at demonstrations: