Koepka, Rose among 5 players not competing in Match Play 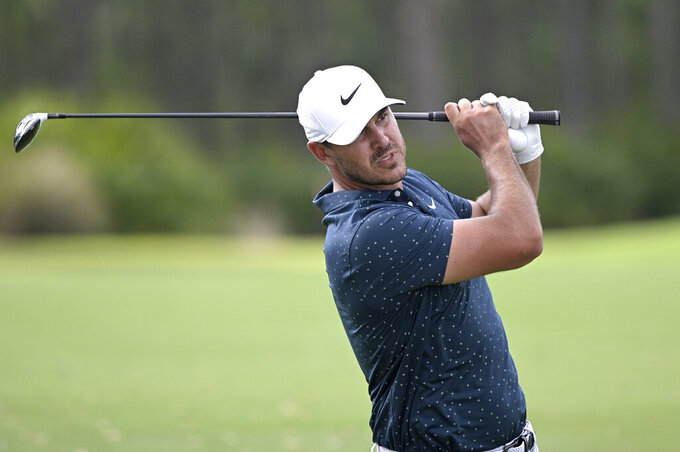 Brooks Koepka hits from the seventh fairway during the final round of the Workday Championship golf tournament Sunday, Feb. 28, 2021, in Bradenton, Fla. (AP Photo/Phelan M. Ebenhack)

Brooks Koepka and past finalist Gary Woodland were among five players from the top 64 in the world who will not be playing in the Dell Technologies Match Play next week at Austin Country Club.

Koepka is recovering from a strain in his right leg. The Match Play, which starts Wednesday in Austin, Texas, will be the third straight tournament the four-time major champion has not been able to play.

Woodland, Adam Scott, Justin Rose and Tiger Woods are the others from the top 64 in the world ranking who will not play, the least surprising being Woods. He only returned home to Florida this week to resume a long recovery from serious leg injuries in a Feb. 23 single-car crash in Los Angeles.

They were replaced in the field by the next five available in this week's world ranking — Ian Poulter, Erik van Rooyen, Adam Long, J.T. Poston and Dylan Frittelli, who played college golf at Texas.

Scott had said last week he would not be playing. His final event ahead of the Masters is this week at the Honda Classic. Rose withdrew from Bay Hill and The Players Championship with back issues.

Woodland, who lost to Rory McIlroy in the championship match at Harding Park in 2015, tested positive for the coronavirus and had to withdraw from the Honda Classic. It was not clear if the 10-day isolation required under PGA Tour protocols would allow him to play the Match Play because of the Wednesday start.

According to tour regulations, a player must start the first match in group play to be eligible for the next two.

Dustin Johnson, who won at Austin Country Club over Jon Rahm in 2017, Justin Thomas, Rahm and Bryson DeChambeau are the top seeds.