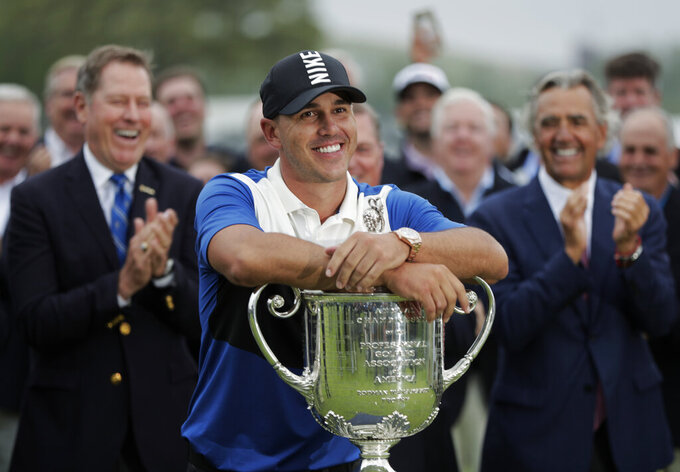 FILE - In this May 19, 2019, file photo, Brooks Koepka poses with the Wanamaker Trophy after winning the PGA Championship golf tournament at Bethpage Black in Farmingdale, N.Y. Brooks Koepka will try to become the first player to win the PGA Championship three straight times in stroke play, and there won't be anyone at Harding Park to cheer him on. The PGA of America confirmed Monday, June 22, 2020, the first major of this most unusual year won't have spectators.(AP Photo/Julio Cortez, FIle)

Brooks Koepka felt like he was doing everything by the book.

He took his COVID-19 test when he arrived in Connecticut for the Travelers Championship and waited until he received the result (negative) before going to watch his brother, Chase, earn a spot in the field through Monday qualifying.

When he made it, Koepka arranged a house for his brother to stay in that wasn't available until the next day.

“He didn't have a place to stay,” Koepka said Wednesday. “I told him to stay with us.”

Both withdrew before the tournament even began after Koepka's caddie tested positive for the coronavirus, even though subsequent tests on the players came back negative. Each cited the need to be safe, not only for themselves but the other players and caddies at the TPC River Highland.

“I feel terrible for Chase,” Koepka said as he was packing up his rental house. “This course is made for him. He's playing as good as I've ever seen him. And I put him in that situation. I think it's the right thing to do, and I admire that. But it's hard."

Chase Koepka has played five times on the PGA Tour, twice with his four-time major champion brother in the team event at the Zurich Classic, where they tied for fifth in 2017. He primarily played the Challenge Tour last year in Europe, just like his older brother did on his way to becoming among the elite in golf.

After getting into the field, Chase Koepka joined his brother, Graeme McDowell and British Open champion Shane Lowry for a practice round. Koepka's caddie, Ricky Elliott, grew up with McDowell in Portrush, Northern Ireland.

Brooks Koepka said he called the tour to mention the practice round with McDowell and thought they should be tested first thing Wednesday morning. Koepka's test was negative. His caddie's came back positive.

“I knew I was going to withdraw once Ricky was positive,” Koepka said.

Chase Koepka told the tour he withdrew after having played with two caddies who had positive tests. Neither Koepka nor his caddie, Don Gambil, tested positive.

“Despite being very excited about playing the Travelers Championship, I am electing to withdraw,” Chase Koepka said in a statement. “I was in close contact with someone who tested positive. I feel as if this is the best decision to keep all other players, caddies and volunteers safe. I wish everyone the best of luck this week.”

Brooks Koepka has preached the importance of having a tight circle. He had private housing in Fort Worth, Texas, and Hilton Head Island, South Carolina, with a private chef. His caddie, coach and trainer stayed with him. He even set up his own gym.

And now he has a few weeks off, which was the least of his concerns.

“My brother had an opportunity this week. The course suits him to a tee. That's who I feed bad about,” Koepka said. “I admire Chase for doing that. I don't think many guys in that position would do everything he did. Life goes on for me. For him, it was like one of those once-in-a-lifetime opportunity.”