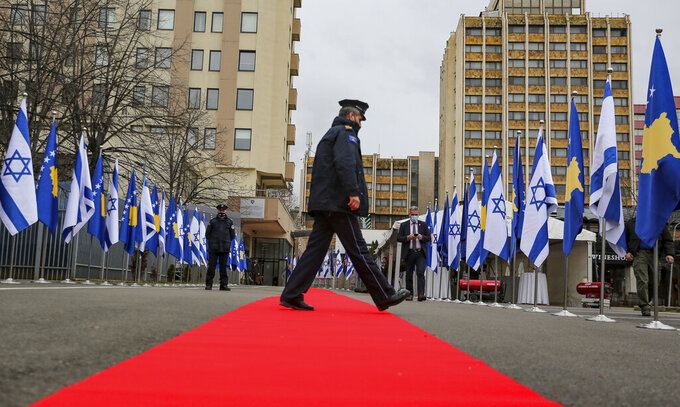 A Kosovo police officer walks across a red carpet prior to a ceremony held digitally, in the capital Pristina, Monday, Feb. 1, 2021. Kosovo and Israel formally have established diplomatic ties in a ceremony held digitally due to the pandemic lockdown. Kosovo’s Foreign Minister Meliza Haradinaj-Stublla and her Israeli counterpart Gabriel Ashkenazi on Monday held a virtual ceremony signing the documents. The two countries considered it as “making history” and marking “a new chapter.” (AP Photo/Visar Kryeziu)

TIRANA, Albania (AP) — Kosovo and Israel formally established diplomatic ties on Monday in a ceremony held digitally due to the pandemic lockdown.

Kosovo Foreign Minister Meliza Haradinaj-Stublla and her Israeli counterpart, Gabi Ashkenazi, held a virtual ceremony to sign the documents in their respective countries.

“Today we are making history. We are establishing diplomatic relations between Israel and Kosovo,” said Ashkenazi.

“We mark a new chapter in the historical bond between our countries,” Haradinaj-Stublla responded in her speech.

With Monday’s agreement, Kosovo is to become just the third country after the U.S. and Guatemala to have its embassy located in Jerusalem. It also is the first European or Muslim-majority country to do so. Most countries' embassies are in Tel Aviv.

The Palestinians claim east Jerusalem, captured by Israel in the 1967 Mideast war and later annexed, as the capital of a future state. Most of the international community does not recognize the Israeli annexation of east Jerusalem and says the competing claims to the city should be resolved through negotiations.

Israeli officials said Kosovo has already selected a location in central Jerusalem and is expected to open the embassy in the next two or three months.

The decision on mutual recognition between Kosovo and Israel was achieved last September as part of a summit at the White House when Kosovo Prime Minister Avdullah Hoti and Serbian President Aleksandar Vucic agreed to normalize economic ties in the presence of then-President Donald Trump.

Speaking in France after talks with French President Emmanuel Macron, Vucic said he's not happy with the Israel-Kosovo agreement and that it could hurt Serbia's future ties with Israel.

Serbia does not recognize its former province of Kosovo as a separate state.

At the Washington summit, Belgrade also agreed to move its embassy in Israel to Jerusalem, something it hasn’t done so far.

Ashkenazi said “Israel wants a stable Balkans,” adding that, “I consider Serbia as a close and significant partner in the Balkans.”

The Trump administration recognized Jerusalem as Israel’s capital in late 2017 and moved the U.S. embassy there in May 2018.

It encouraged other countries to do the same but was widely criticized by the Palestinians and many in Europe because the Israeli-Palestinian conflict remains unresolved.

Kosovo’s Parliament declared independence from Serbia in 2008, nine years after a U.S.-led 78-day NATO airstrike campaign against Serbia to stop a bloody crackdown against ethnic Albanians in Kosovo.

Most Western nations have recognized Kosovo’s independence, but Serbia and its allies Russia and China have not.

Israel becomes the 117th country to recognize Kosovo, according to Haradinaj-Stublla.