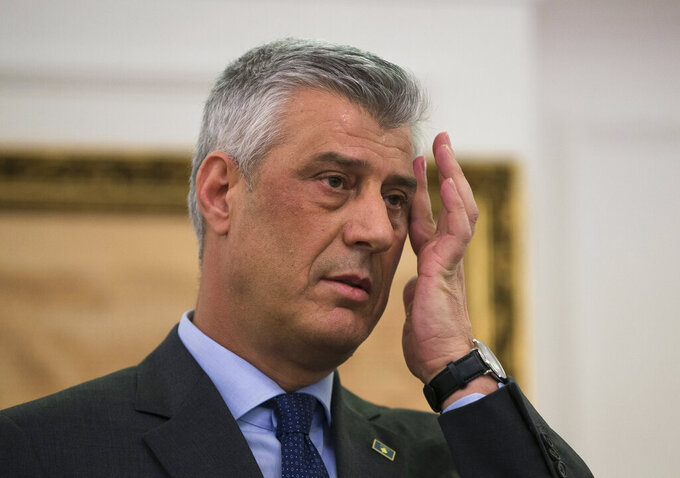 FILE - In this Monday, Jan. 21, 2019 file photo, Kosovo president Hashim Thaci gestures during a press conference in Kosovo capital Pristina. Kosovo’s president and nine other former separatist fighters were indicted on a range of crimes against humanity and war crimes charges, including murder, by a court investigating crimes against ethnic Serbs during and after Kosovo’s 1998-99 independence war with Serbia, it was reported on Wednesday, June 24, 2020. (AP Photo/Visar Kryeziu, File)

PRISTINA, Kosovo (AP) — The president of Kosovo headed back to his country Friday after pulling out of a White House meeting due to his indictment for war crimes stemming from the 1990s armed conflict between ethnic Albanian separatists he helped lead and Serbian forces.

President Hashim Thaci, who had already left for Washington and was in Austria when the charges against him were announced, landed at Tirana International Airport in Albania and was said to be on his way to Kosovo by car. The airport in Kosovo's capital of Pristina remains closed due to the coronavirus.

Thaci said he would address the people of Kosovo from his office on Sunday evening.

“Wish you a calm weekend and remain hopeful that better days for Kosovo and the Albanian people are ahead,” he posted on Facebook.

A special prosecutor who has been investigating alleged war crimes by the Kosovo Liberation Army during and after the 1998-99 conflict on Wednesday announced the indictment of Thaci and nine other former rebel fighters on murder and other charges of war crimes and crimes against humanity against ethnic Serbs, Roma and others.

A pretrial judge at the Kosovo Specialist Chambers in The Hague is studying the indictment and could still reject it if there is not enough evidence to back it up.

Asked about Thaci’s draft indictment, Serbian President Aleksandar Vucic said in Brussels that Belgrade has been very “cautious” and showed restraint in reacting to avoid fueling tensions over the issue.

“We know that horrific crimes against Serbs took place, and in that sense it is good that there is justice,” Vucic said.

Thaci was a commander of the Kosovo Liberation army, or KLA, that fought for independence from Serbia. The fighting left more than 10,000 dead, most of them ethnic Albanians, and 1,641 are still unaccounted-for. The war ended after a 78-day NATO air campaign that forced Serbian troops to withdraw.

The vast majority of atrocities committed during the 1998-99 Kosovo war were committed by Serbian troops, international courts have confirmed with their sentencing of several top Serb officials and military commanders to lengthy jail terms.

U.S presidential envoy Richard Grenell had organized a White House meeting of the Kosovar and Serbian leaders scheduled for Saturday. Thaci canceled his attendance after his indictment. Kosovar Prime Minister Avdullah Hoti was expected to fill in co-leading the meeting with Vucic but then also canceled.

The White House meeting would have been be the first talks between Serbia and Kosovo in 19 months. Kosovo declared independence from Serbia in 2008, a move Serbia has not recognized. The United States and the European Union have been working to help normalize ties between the two countries.