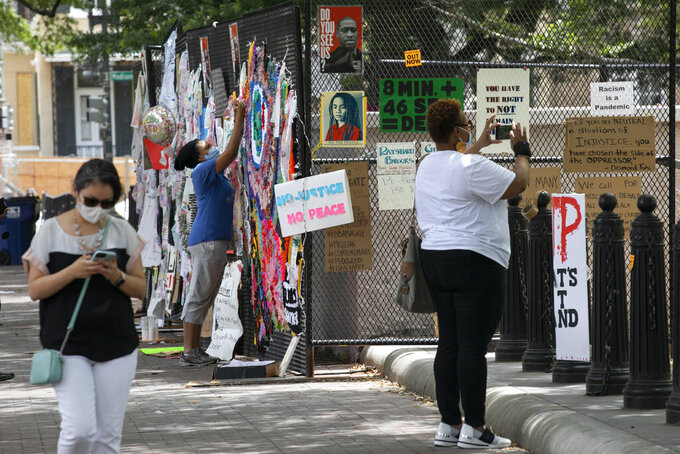 People look at protest posters that adorn the last remaining anti-scaling fencing surrounding a small building in Lafayette Park, Tuesday, June 16, 2020, near the White House in Washington, where protests have occurred over the death of George Floyd, a black man who was in police custody in Minneapolis. The rest of the park is open. (AP Photo/Jacquelyn Martin)

NEW YORK (AP) — Charlottesville. Helsinki. The children in cages at the Mexican border.

Only a few legacy-defining moments have clung to President Donald Trump, who often appears to emerge relatively unscathed from a seemingly endless stream of crises and controversies. But the forceful clearing of demonstrators from the park across from the White House has resonated like few others, prompting top military leaders and usually lockstep Republicans to distance themselves from him.

It's one of those rare images that seem unlikely to be overwritten by tomorrow’s headlines, instead claiming a prominent place in Trump’s entry in the history books. It also could help shape an election less than five months away. Even the president and members of his inner circle have privately expressed worry that its impact could be lasting.

“It’s an indelible moment when the president of the United States ordered the use of force against peaceful protesters using their First Amendment rights in order to walk across Lafayette Square" and hoist a Bible, said Steve Schmidt, senior adviser to John McCain’s 2008 presidential campaign. “In 10 minutes, he totally disgraced his office and committed sacrilege.”

Protests, some violent, had flooded America’s streets after the death of George Floyd, a black man who was pinned under the knee of a white Minnesota police officer. Trump had briefly been forced to take shelter in the emergency White House bunker, and flames had risen from St. John’s Church across from the executive mansion. Lafayette Square was ordered to be cleared.

What happened was broadcast live to the nation: federal law enforcement officers using batons, shields and chemical agents to forcibly push back peaceful protesters. Trump walked to the church and awkwardly held up a Bible, accompanied by top officials. The White House quickly produced a slick ad celebrating the triumph.

The ad doesn't run anymore. Aides have pointed fingers at each other as to who suggested what while some of Washington’s most prominent figures, perhaps with an eye toward the judgment of history, have tried to keep their distance.

Defense Secretary Mark Esper said he wasn't aware of what Trump had planned before he joined him. Gen. Mark Milley, chairman of the Joint Chiefs of Staff, issued a remarkable public apology for participating. Several Republicans, including Sens. James Lankford of Oklahoma and Ben Sasse of Nebraska, denounced the use of force and the display of religion.

The president has seethed about what transpired, believing he wasn't properly prepared by aides for the blowback and venting that media coverage was unfair, according to three White House and campaign officials not authorized to publicly discuss private conversations. He was angered by Milley and Esper’s rebukes but, for now, doesn't want them dismissed, the officials said.

The Trump campaign, looking at internal polling, is worried about a drop in support for the president coming amid questions about his handling of the COVID-19 pandemic, which has killed nearly 120,000 Americans and put more than 40 million out of work. And some in Trump’s inner circle have privately likened it to other dark days in his presidency.

In August 2017, a clash erupted between white supremacists and anti-racist protesters in Charlottesville, Virginia, leaving one demonstrator dead. In the days that followed, Trump suggested there were “very fine people on both sides” of the violence, drawing rebukes from members of his own administration and party.

The next July, the president stood next to Russia’s Vladimir Putin at a summit in Helsinki and declined to say he believed his own nation’s intelligence services’ conclusion that Moscow had interfered in the 2016 election. Before Air Force One had even touched back down in Washington, Trump was faced with the biggest intra-party revolt of his term.

That summer, images of his administration’s enforcement of a policy to separate immigrant children from their parents stunned a nation and were later cited by many Democratic strategists for being a defining issue in that year’s midterm elections.

“There are moments over the last three-and-a-half years that run so contrary to our self-conception that it causes us to pause and to ask the fundamental question: Are we losing ourselves in this moment?” said Eddie Glaude, chair of the department of African American studies at Princeton University.

The president’s bungled church photo op has, according to polling, generated widespread sympathy for the demonstrations and sparked fears in Trump’s campaign it could be a breaking point for voters who cast their ballots for the Republican in 2016 but are uncertain this time.

“When Donald Trump ordered the violent removal of peaceful protesters so he could stage a bizarre and offensive photo op, it didn’t project strength as he had intended, but instead reflected profound weakness,” campaign spokesman TJ Ducklo said.

Despite closed-door concerns, Trump has continued to lean in on his tough, law and order approach. On Tuesday, during a White House signing ceremony for an executive order on police reform, Trump was surrounded by law enforcement leaders, not the families of victims of police misconduct. And his campaign publicly continued to defend the decision to clear the park across from the West Wing.

“President Trump’s visit to historic St. John’s Church was a powerful statement to the American people that acts of violence against our cities and neighborhoods will not prevail,” said Tim Murtagh, the campaign’s communications director. He said Trump was “turning Americans’ anger into action” with the executive order.

Trump has shaken off previous controversies that would have crippled other presidencies. The two-year Russia investigation didn't cause his base supporters to waver, and his impeachment last winter was immediately dwarfed by the approaching pandemic. Some observers believe Trump may be able to cast aside Lafayette Square, too.

“There are moments that we will remember, that will be in the first part of his legacy, but don’t change his support,” said Julian Zelizer, presidential historian at Princeton University. “Considering the pandemic, the protests, and that the country has been shut down for months, it’s remarkable his approval isn’t lower. Anything can happen between now and November.”