Lamont sends Guard to D.C. as state prepares for any rallies 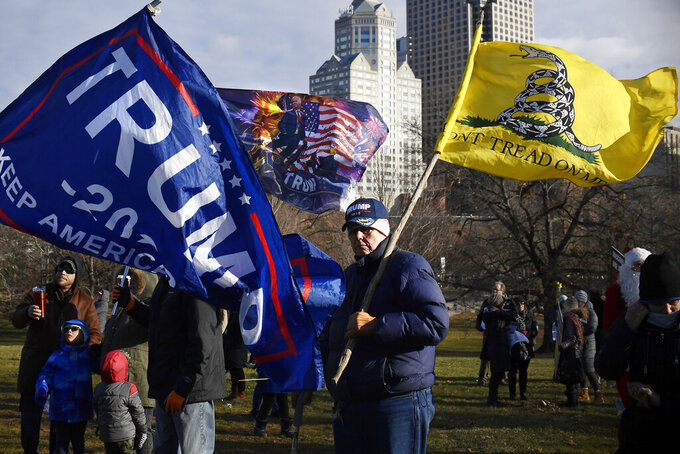 A Trump supporter protests outside on the State Capitol grounds, Wednesday, Jan. 6, 2021, in Hartford, Conn. Hundreds of protesters turned out for the swearing-in ceremonies. (AP Photo/Jessica Hill)

As Connecticut law enforcement prepares to protect the state Capitol complex during possible armed protests in the coming days, Gov. Ned Lamont announced Tuesday he is authorizing the deployment of more than 100 members of the Connecticut National Guard to help protect the U.S. Capitol in Washington.

Lamont, who made the authorization at the request of U.S. National Guard officials, said Connecticut's contingent will include members of the military police and two patrol explosive-detection dog teams. Additionally, the state's Air Guard placed its C-130H aircraft on alert in case personnel need to be moved throughout the country.

"The state of Connecticut stands ready to help ensure the peaceful transition of power and protect our democracy,” Lamont said in a written statement.

Lamont's statement made no mention of using Connecticut National Guard members to protect the state Capitol in Hartford, given the warning from the FBI that armed protests could take place at all 50 state capitols ahead of President-elect Joe Biden's Jan. 20 inauguration.

While local authorities are aware of possible protests occurring Jan. 17 and 20, State Capitol Police Officer Scott Driscoll, the department's spokesperson, said Tuesday there are plans to “maintain a high level of security throughout.”

Driscoll noted the department has not learned of any specific threats yet regarding Connecticut's state Capitol, which has been closed to the public since the beginning of the coronavirus pandemic. The FBI has warned of protests at all 50 statehouses.

'We’ve heard those two dates ... but we we are staying at a heightened awareness at all times," he said. “So we’ve increased a lot of our safety aspects.”

The state Capitol police, whose motto is “Protecting Democracy,” have stepped up security sweeps of the complex, which includes the historic Capitol building and grounds, the Legislative Office Building and the adjacent parking garage. They have also increased their overall presence to be highly visible both inside and outside the campus.

Steel “bike rails," initially installed ahead of last week's opening day of the General Assembly to help promote social distancing as state legislators took their oath office outside, have been reconfigured around the Capitol building. Parking has been closed to the public in the state Capitol parking lot and in the LOB garage.

About 500 people turned out Wednesday for opening day of the 2021 legislative session to protest matters including Biden’s election victory and proposed state legislation that would end a religious exemption from vaccines for schoolchildren. One arrest was made.

He said the state's public safety commissioner, the state police and the Connecticut Intelligence Center, a unit created after the 2001 terrorist attacks, and the state Capitol police have been receiving regular updates from the federal government about the situation.

“The state of Connecticut, from a security standpoint, will be ready and prepared based upon any particular escalation that we see of these various actions at state-related buildings or state-related facilities,” Mounds said.

When asked if he was aware of any specific threats or events of concern in Connecticut, Mounds said there's “nothing that we can speak of at this time.”