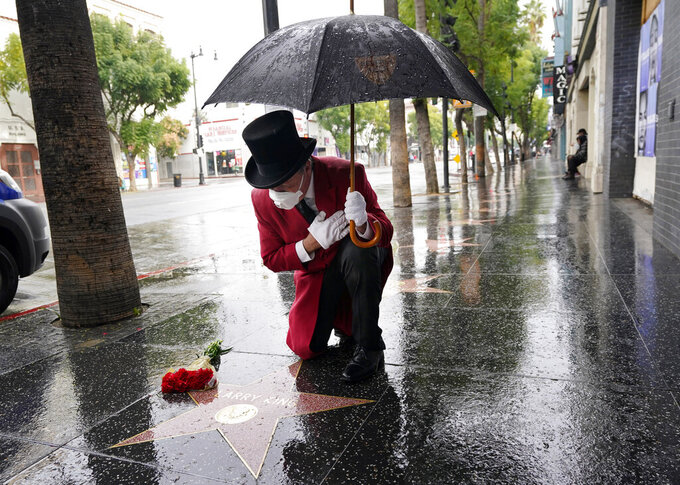 Gregg Donovan, the former ambassador of Beverly Hills and a friend of the late broadcasting giant Larry King for over 30 years, pays his respects at King's star on the Hollywood Walk of Fame, Saturday, Jan. 23, 2021, in Los Angeles. King, the host of "Larry King Live" on CNN for over 25 years, died Saturday at Cedars-Sinai Medical Center in Los Angeles at age 87. "Larry was a legend in all aspects," Donovan said. "Any actor or performer, if you were on 'Larry King Live,' you knew you had made it, that you had arrived." (AP Photo/Chris Pizzello) 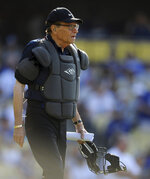 King died at Cedars-Sinai Medical Center in Los Angeles, his production company, Ora Media, tweeted. No cause of death was given, but a spokesperson said Jan. 4 that King had COVID-19, received supplemental oxygen and been moved out of intensive care.

A longtime nationally syndicated radio host, he also was a nightly fixture on CNN from 1985 through 2010 as the host of “Larry King Live.” He won many honors, including two Peabody awards, during the show's 25-year run.

King set himself apart with the curiosity he brought to every interview, whether questioning the assault victim known as the Central Park jogger or billionaire industrialist Ross Perot, who in 1992 announced his presidential candidacy on King’s show.

King conducted an estimated 50,000 on-air interviews. In 1995, he presided over a Middle East peace summit with Palestine Liberation Organization Chairman Yasser Arafat, King Hussein of Jordan and Israeli Prime Minister Yitzhak Rabin. He welcomed everyone from the Dalai Lama to Elizabeth Taylor, from Mikhail Gorbachev to Barack Obama, Bill Gates to Lady Gaga.

Especially after he relocated to Los Angeles from Washington, “Larry King Live” frequently ended up in the thick of breaking celebrity news. The show featured Michael Jackson’s friends and family members talking about the singer's death in 2009.

“I don’t pretend to know it all,” King said in a 1995 Associated Press interview. “Not, `What about Geneva or Cuba?′ I ask, `Mr. President, what don’t you like about this job?′ Or `What’s the biggest mistake you made?′ That’s fascinating.”

He was known for getting guests who were notoriously elusive. Frank Sinatra, an old friend, spoke to King in 1988 in what would be the crooner's last major TV appearance. King had never met Marlon Brando when the actor asked to appear on his show in 1994.

After a gala week marking his 25th anniversary in 2010, he abruptly announced he was retiring from CNN, telling viewers, “It’s time to hang up my nightly suspenders.”

Once the leader in cable TV news, King ranked third in his time slot with less than half the nightly audience than during his peak year, 1998, when “Larry King Live” drew 1.64 million viewers. His approach to interviewing by then felt dated in an era of edgy questioning by other hosts.

He found a new sort of celebrity on Twitter, attracting over more than 2 million followers who mocked and loved him for his esoteric style.

King was born Lawrence Harvey Zeiger in 1933, a son of Jewish immigrants who ran a bar and grill in Brooklyn.

A fan of such radio stars as Arthur Godfrey and comedians Bob & Ray, King on reaching adulthood set his sights on a broadcasting career. He headed to Miami in 1957 and landed a job sweeping floors at a tiny AM radio station. When a deejay abruptly quit, He was put on the air — and given the surname King by the station manager, who thought Zeiger sounded “too Jewish.”

By the early 1960s, King landed at a much larger Miami station, scored a newspaper column and become a local celebrity himself.

He accumulated debts, as well as his first broken marriages. (During his life, King was married eight times to seven women.) He became involved with a shady financier in a scheme to bankroll an investigation of President John Kennedy’s assassination. When King skimmed some of the cash to pay his overdue taxes, his partner sued him for grand larceny in 1971. The case was dropped, but King’s reputation appeared ruined.

The scandal had largely blown over by 1975, and a Miami station gave him another chance. Regaining his local popularity, King was signed in 1978 to host radio’s first nationwide call-in show on the Mutual network. “The Larry King Show” was eventually heard on more than 300 stations.

He was just 18 when he married high school girlfriend Freda Miller in 1952. The marriage lasted less than a year. His last marriage, in 1997, was to Shawn Southwick, a country singer and actress 26 years King's junior. The couple filed for divorce in 2010, rescinded the filing, then filed for divorce again in 2019.

The couple had two sons - King’s fourth and fifth children - Chance and Cannon Edward. In 2020, His two oldest children, Andy King and Chaia King, died before their father of unrelated health problems.

King continued to work into his late 80s, taking on online talk shows and infomercials.