Last votes being cast across New York in party primaries 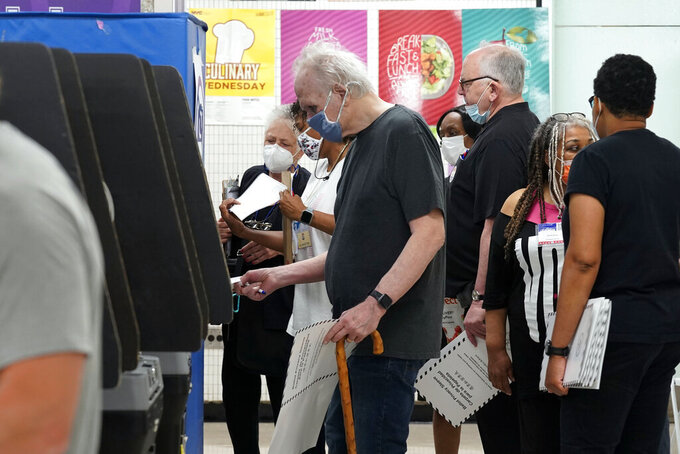 Voters place their marked ballots in scanners at Frank McCourt High School, in New York, Tuesday, June 22, 2021. The final votes are set to be cast Tuesday in New York's party primaries, where mayors, prosecutors, judges and city and county legislators will be on the ballot, along with other municipal offices. (AP Photo/Richard Drew)

With no presidential or congressional races at stake, turnout was expected to be a fraction of what the state saw last November.

Yet even with fewer votes to count, results in some races could take time to emerge.

New York's pandemic-era expansion of mail-in voting is still in effect, and many absentee ballots won't be counted until a week after the election.

Results could take longest in New York City, which is using ranked-choice voting to decide the winners in many contests, including the Democratic race for mayor.

That's a system in which voters rank up to five candidates in order of preference and the lowest performers are eliminated in a series of computerized rounds of vote tallying until only two candidates remain.

Also in the city, several Democrats are running to succeed Manhattan District Attorney Cyrus Vance Jr., who has been leading a probe of former President Donald Trump's business dealings.

The winner will take over both that investigation and an office with a staff of 500 lawyers and a $125 million budget.

In Rochester, Mayor Lovely Warren is facing a tough challenge in the Democratic primary from City Councilmember Malik Evans.

She is running while under indictment for alleged campaign finance violations. Her husband also recently pleaded not guilty to being part of a drug trafficking ring.

Warren has been bruised by criticism of her handling of the death of a Black man, Daniel Prude, who stopped breathing as he was being held to the pavement by police officers.

Across the state, prosecutors, judges, municipal and county legislators and other candidates are also on the ballot.