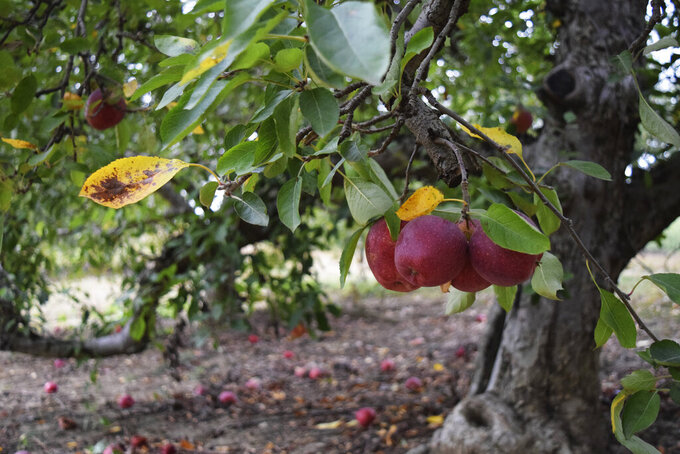 Apples hang from at tree at Anderson Orchard, Friday, Oct. 2, 2020, Mooresville, Ind. During what would normally be primetime for Midwest apple-picking, orchards around Indiana are running out of apples early this season following a late spring freeze that obliterated much of the state’s crop. (AP Photo/Casey Smith)

INDIANAPOLIS (AP) — During what would normally be primetime for Midwest apple-picking, orchards around Indiana are running out of apples early this season following a late spring freeze that obliterated much of the state's crop.

“It's the worst we’ve seen in quite some in decades in Indiana," Hirst said. “This is really rare for us to have damage as severe as what we’ve seen this year.”

Damage was widespread across Indiana's orchards, but growers say cold-related damage in neighboring Michigan — the country's third-largest apple-producing state — was likely limited to crops in the southwest, with Red Delicious and Jonagold apples affected most.

Spring frosts in New York’s Hudson Valley and parts of Pennsylvania and Virginia are also expected to reduce the bloom on several apple varieties this year, although the U.S. Department of Agriculture estimates the nation's 2020 apple crop to be just 3% less than in 2019 and 2% less than the five-year average.

While less than 1% of the nation’s apples are grown in Indiana, the niche allows farmers to sell directly to consumers, Hirst said. That's a “huge advantage” for the state's apple industry, he continued, but it also means orchards "have to get very creative, still offering that family experience, even though they may not have as many apples on the trees.”

At Jacobs’ Family Orchard in New Castle, Indiana, more than 90% of the crop was lost at the 35-acre farm, said co-owner Stephanie Jacobs. To make up for the low yields, apples are being outsourced so orchard staff can continue to make cider, caramel apples and other seasonal goods.

“Our apple numbers are way lower than normal — we had almost none," she said. "We prepare for this kind of thing, but we’re really having to improvise right now.”

Tuttle Orchards, in Greenfield, Indiana, saw a similar shortage, with only 5% of the farm’s crop salvageable after the freeze. Apples were picked off the trees by mid-September, leading the orchard to end its pick-your-own-apple season more than a month earlier than usual and shift focus to its pumpkin patch.

In the days after the May 9 freeze, hundreds of apples shriveled up, browned and began falling off trees, said Erin Sterling, co-owner of Anderson Orchard in Mooresville, Indiana, one of the state's largest at 150 acres.

Originally estimating they’d lost nearly all of their apple crop, Sterling said the central Indiana orchard's hilly terrain — which keeps some trees higher-elevated and less-affected by cold temperatures — might be why a quarter of their fruit survived.

“It was prime time when the freeze hit. We were in bloom, we had lots of little apples that just weren’t hearty and they just weren’t ready for those temperatures. I cried and cried," she said, “We still lost most of the crop, but we have some, and some is better than none.”

Anderson’s self-picking season usually lasts through mid- to late-October, Sterling continued. But fewer apples, combined with large crowds at the orchard shortly after Labor Day, left many of the trees picked over by mid-September.

“We ran out fast this year,” Sterling said. “We're just grateful so many people have been coming out."

Southern Indiana's Engelbrecht’s Orchard has also recorded waves of visitors, despite concerns that COVID-19 would keep families from the orchard. Mostly spared from late freeze conditions, the orchard just north of Evansville has attracted patrons from around Indiana and across state lines, said co-owner Kristi Schulz.

“We really are having a pretty good apple season — we’ve been very fortunate this year with actually having crops," Schulz said, noting nearly normal crop yields and minimal frost rings on some of the fruit. “We somehow dodged a big weather bullet in our little southwestern Indiana area for whatever reason. We’re very, very thankful.”

Apple sales, too, have increased. Schulz said the orchard has seen an influx of families coming earlier in the season to pick apples, and many take home more than in previous years.

“Most people will come out and pick up a couple of pounds — maybe 20 tops, which is a lot for most families,” she said. “But this year, we just have people picking multiple bushels, like 50 to 60 pounds. The virus hasn't stopped them from picking fruit — in fact, it might have made them want even more.”

While COVID-19 has had a minimal impact on orchard visitation in Indiana, the pandemic has exacerbated labor and farmhand issues for commercial apple orchards across the country, said Jim Bair, president of the U.S. Apple Association. With many schools not serving lunches and sandwich and deli shops closed due to the virus, too, uncertainties also remain about futures on apple sales.

“Spring freezes are a reminder that Mother Nature isn't always nice, and it seems like every year, apple growers in different parts of the country are having to deal with them,” Bair said. “But there’s no question that the coronavirus is going to have some long-term impacts in the apple industry. It’s been a few months of turmoil and chaos, but we’re all doing our best to work through the challenges."