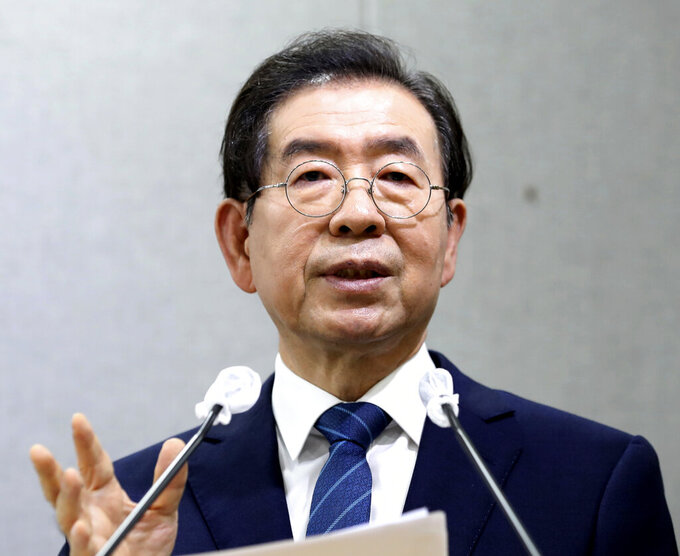 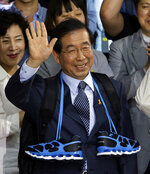 SEOUL, South Korea (AP) — Park Won-soon, the three-term mayor of South Korea's capital, a fierce critic of economic inequality who was seen as a potential presidential candidate in 2022, was found dead early Friday. He was 64.

Police said Park’s body was found near a restaurant nestled in wooded hills stretching across northern Seoul after a more than seven-hour search involving hundreds of police officers, firefighters, drones and dogs.

They said there were no signs of foul play, but gave no further details on the cause of death.

The Seoul Metropolitan Government earlier said Park did not come to work on Thursday and had canceled his schedule for the day.

His daughter reported him missing Thursday afternoon, saying he had given her a “will-like” verbal message and left home. He was last seen on security video entering a park at the mouth of the hills late Thursday morning.

It wasn’t immediately clear what caused Park’s disappearance and death. When asked about local media reports that one of his secretaries had filed a complaint against him involving alleged sexual harassment, Seoul police official Choi Ik-su confirmed that a complaint against Park had been filed with police on Wednesday but didn’t specify what he was accused of.

Park, a liberal human rights lawyer who once led two of South Korea’s most influential civic groups, was credited with winning the country’s first sexual harassment conviction as an attorney. He was elected Seoul mayor in 2011, upsetting his conservative opponent as an independent candidate backed by opposition liberals. He became the city’s first mayor elected to a third term in June 2018 and had been considered a potential presidential candidate in the next election in 2022.

Park mostly maintained his activism as mayor, lamenting the country’s growing gap between rich and poor, gender inequality, and corrupt ties between large businesses and politicians.

He was also a vocal critic of Japan, which ruled the Korean Peninsula as a colony from 1910 to the end of World War II, over what he described as Tokyo’s refusal to sincerely repent for atrocities such as forced labor and a system of sexual slavery for Japanese troops.

Despite positioning himself as a champion of the poor and powerless, Park was criticized for pushing ahead with aggressive redevelopment projects that razed old commercial and housing districts and drove out tenants who couldn’t afford the spike in rents.

During his first terms, Park established himself as a fierce opponent of former conservative President Park Geun-hye and openly supported the millions of protesters who flooded the streets of his city in late 2016 and 2017 calling for her ouster over a corruption scandal. Months after her impeachment, Park Geun-hye was formally removed from office by a court ruling in March 2017 and is currently serving a decades-long prison term for bribery, abuse of power and other charges.

In recent months, Park Won-soon led an active campaign against the coronavirus as it spread in the city, shutting down thousands of nightspots and issuing an administrative order banning rallies in major downtown streets.

South Korea has seen the sudden deaths of key political figures before.

Former liberal President Roh Moo-hyun, who was a close friend and mentor of current President Moon Jae-in, leapt to his death in 2009, a year after leaving office, amid allegations that family members had taken bribes from a businessman during his presidency. Former military dictator Park Chung-hee, the father of Park Geun-hye, was assassinated by his spy chief during a late-night drinking session in 1979.