The Latest: 2 Temple basketball games postponed due to virus 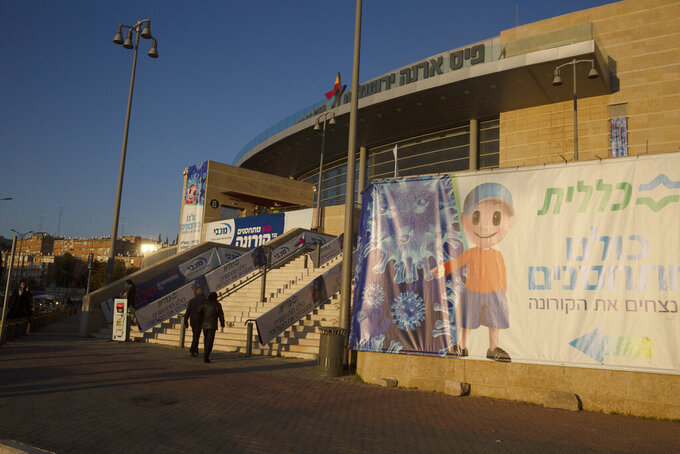 A positive COVID-19 test and ensuing contact tracing at Temple have postponed the Owls’ next two basketball games.

The American Athletic Conference announced the postponements on Thursday. Temple had been set to host Memphis on Saturday and visit Tulane on Tuesday. The games have not been rescheduled yet.

Arizona Cardinals safety Chris Banjo will not play Sunday after being placed on the reserve/COVID-19 list.

The decision by the team Thursday comes with Arizona (8-7) set to play at the Los Angeles Rams (9-6) in a regular-season finale and two playoff berths potentially on the line. The Cardinals need a win to get in. The Rams need a win or a loss by the Chicago Bears.

The reserve/COVID list was created for a player has tested positive test or has been quarantined after having been in close contact with an infected person.

Brockers joins receiver Cooper Kupp on the list ahead of the Rams’ season finale against the Arizona Cardinals on Sunday.

Kupp isn’t expected to rejoin the Rams in time for the game, while the team hasn’t speculated on Brockers’ availability.

Brockers is a key starter, leader and run-stopper for the NFL’s top-ranked defense, with 51 tackles and five sacks.

If Brockers is out for Sunday, it would be another blow to Los Angeles’ playoff hopes, which hinge on a win or a loss by Chicago. The Rams already will face Arizona without leading passer Jared Goff, leading rusher Darrell Henderson and probably Kupp, their leading receiver.

The Atlanta Falcons have placed center Alex Mack on the reserve/COVID-19 list.

The move came after the team stopped all in-person work at its practice facility and reported a positive COVID-19 test. The Falcons did only virtual work on Thursday following the positive test.

The team says Sunday’s final regular-season game at Tampa Bay is not threatened.

Pitt has paused all women’s basketball team activities just before the team was scheduled to host Boston College because of a positive COVID-19 test within the Panthers’ program.

Due to COVID-19 protocols, the Panthers’ next three games -- against North Carolina on Sunday, at No. 2 Louisville next Thursday and against Clemson on Jan. 10 -- also have been postponed.

Middle Tennessee has postponed a pair of basketball games at Florida Atlantic because of positive COVID-19 tests and contact tracing within the Blue Raiders’ program.

The Blue Raiders had been set to play the Owls on Friday and Saturday in a rare back-to-back. Now Middle Tennessee and Florida Atlantic are working with Conference USA to reschedule the games.

This is the third time Middle Tennessee’s schedule has been affected by the coronavirus pandemic. Akron canceled a game against the Blue Raiders in the Gulf Coast Showcase starting the season, and Middle Tennessee canceled its home-and-home set with Bellarmine on Dec. 19 and Dec. 21. The Blue Raiders remain scheduled to host FIU on Jan. 8 and Jan. 9.

Detroit Mercy’s basketball program has canceled Horizon League games scheduled for Friday and Saturday at Illinois-Chicago to address what the school called “the mental health and well-being of its student-athletes.”

The Titans are 1-7 and 0-4 in conference play after losing two games apiece to Wright State and Oakland.

Athletic director Robert Vowels Jr. said the decision had nothing to do with positive COVID-19 tests among players or coaches. Rather, the pause was decided for “the health and safety of our student-athletes” after discussions with school president Dr. Antoine Garibaldi and coach Mike Davis, who is in his third season with the program.

The pandemic has forced many schools to cancel or postpone games and several coaches have voiced concern about the pressure placed on their players. In early December, Duke canceled its remaining nonconference men’s games and coach Mike Krzyzewski said his players “need to be with their families.” Texas A&M coach Buzz Williams said he was clearly seeing “emotional and mental fatigue and exhaustion and trauma” as the season has lurched ahead.

The Horizon League said in a statement it “is fully supportive of Detroit Mercy’s decision to pause activities and is guided by our top priority: the health, safety and well-being of our student-athletes, coaches and staff.”

The Atlanta Falcons have stopped all in-person work at their practice facility after a positive COVID-19 test.

The team did not immediately disclose if the positive test result came from a player. The Falcons are working virtually on Thursday after consulting with the NFL and medical officials.

The team says the positive test does not threaten the status of Sunday’s final regular-season game at Tampa Bay.

Cleveland’s COVID-19 concerns are growing, with two more positive tests and the Browns trying to get ready to face the Pittsburgh Steelers.

The Browns closed their facility for the second straight day so they can conduct close contact tracing. Practice will likely be pushed back again while tracing continues.

The NFL said there is no change to the status of the game.

The Browns can clinch their first playoff berth since 2002 with a win over Pittsburgh, which will rest several starters, including quarterback Ben Roethlisberger.

It’s the latest virus-related issue for the Browns, who were without eight players -- including their top four wide receivers -- last week and lost to the New York Jets. Some of those players are eligible to return Thursday.

Goodson and Sendejo tested positive with the virus and will miss Sunday’s game. The others are considered high-risk contacts and could return if they continue to test negative.

Former top-ranked Andy Murray has pulled out of the Delray Beach Open to minimize his coronavirus risk as he looks toward the Australian Open.

The 33-year-old Murray said he was concerned about the “increase in COVID rates” and the trans-Atlantic flight in traveling to the Florida tournament that begins Monday.

The Five-time Australian Open runner-up was given a wild-card entry into the first Grand Slam tournament of next year.

Murray has slipped to No. 122 in the ATP rankings after several years of battling hip injuries and surgery.

Murray made a tearful retirement announcement in Melbourne two years ago before undergoing a second round of surgeries to extend his career.