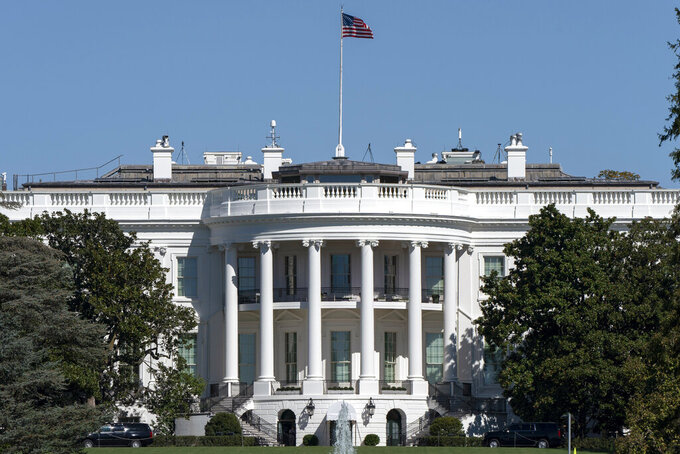 The second presidential debate between President Donald Trump and Democrat Joe Biden is officially off.

The nonpartisan Commission on Presidential Debates confirmed Friday that the Oct. 15 faceoff would be scrapped. The decision was made a day after the commission announced the debate would take place “virtually” because Trump had contracted the coronavirus.

Trump balked at holding the debate in that format, and Biden scheduled a town hall with ABC News for that night once Trump said he would not participate.

Trump’s team later countered with a call to hold the debates as scheduled once the president’s doctor said he would be cleared to hold public events beginning on Saturday.

But the commission said it would not reverse its decision not to have the candidates on stage together, citing an abundance of caution with health concerns — particularly for the town-hall-style debate that was set to feature questions from average voters.

The third debate, scheduled for Oct. 22 in Nashville, Tennessee, is still on.

President Donald Trump is convalescing from the coronavirus at the White House. Democrat Joe Biden is campaigning in Nevada on Friday.

— On radio, TV, Trump sets out to get campaign back on track

Joe Biden is using a campaign stop in economically decimated Nevada to hammer President Donald Trump and Senate Republicans for not doing more to help Americans deal with the economic fallout of the coronavirus pandemic.

The Democratic presidential candidate told supporters Friday at a socially distanced drive-in rally outside Las Vegas that Trump “ignores you” and has “no urgency to deliver hard-working Americans ... what they need desperately.” He says Republican Senate leader Mitch McConnell wants to let state and local governments “go bankrupt.”

Biden blasted Trump for pulling out of congressional negotiations for another round of pandemic economic relief and reversing himself Friday. Biden noted it’s been months since House Democrats passed a $3.4 trillion package for businesses, individuals and local and state governments dealing with cratering tax revenues and increased costs.

Nevada has been hit especially hard in the pandemic economy as tourism to Las Vegas has fallen drastically. The state’s 13.2% unemployment rate in September was the nation’s highest.

President Donald Trump is returning to the campaign trail and will hold his first rally since his COVID-19 diagnosis on Monday in Florida.

Trump’s campaign says the event will take place at 7 p.m. in Sanford.

The rally will be Trump’s first since he tested positive for the coronavirus Oct. 1 with just weeks to go before voting ends in the Nov. 3 election.

Trump’s doctor, Sean P. Conley, said in a memo Thursday that he “fully anticipate(d)” that Trump would be able to safely “return to public engagements” as soon as Saturday.

On Saturday, President Donald Trump is planning to hold his first in-person event since testing positive for the coronavirus.

Two weeks after the Rose Garden event that is now considered a “superspreader,” Trump is planning to convene another large crowd outside the White House for an event on “law and order.” That’s despite the ongoing White House COVID-19 outbreak.

An official says Trump will address the group from a White House balcony. The official declined to say how many people had been invited.

White House doctor Sean Conley said in a memo Thursday that, “based on the trajectory of advanced diagnostics the team has been conducting,” he “fully anticipate(d) the President’s safe return to public engagements” as soon as Saturday.

Trump said during a Thursday interview with Fox News host Sean Hannity that he is already planning rallies, too.

The event was first reported by ABC News.

Joe Biden is heading back to Pennsylvania on Saturday, continuing his focus on his native state that President Donald Trump won narrowly in 2016.

Biden’s campaign announced Friday that he will travel to Erie, which is in one of the most populous counties nationally that flipped to Republican Donald Trump in 2016.

Erie will be especially critical for Biden as he focuses on winning more white voters beyond the state’s Democratic core in Philadelphia and its suburbs.

It’s Biden’s seventh trip to the state since the start of September.

Joe Biden is telling Latinos in Nevada that they can “determine the outcome” of the November election and help deliver a Democratic victory big enough to keep President Donald Trump from pushing “phony challenges” to the results.

The Democratic presidential nominee said Friday at the East Las Vegas Community Center that he can’t win without strong support from Hispanics.

Latinos are on track to surpass Black voters as the single largest nonwhite share of the U.S. electorate. Biden told a masked, socially distanced crowd that voting in decisive numbers is “the thing that guarantees significant influence over what happens next” because politicians respond to those that “delivered the vote.”

Biden drew parallels between his family lineage as Irish Catholic immigrants and much of the Latino community that he said is hurt by Trump’s hard-line immigration policies. Biden says “family and faith” link his experiences with the Hispanic community.

Early voting starts in Nevada on Oct. 17. Democrat Hillary Clinton won the state in 2016, but it remains a battleground.

President Donald Trump, still White House bound after his COVID-19 diagnosis, called into the Rush Limbaugh show for a radio “rally” with the conservative talk host.

Limbaugh started what he describe as a “mega, MAGA rally” — in which Trump is expected to take questions from callers — by praising Trump as the “strongest, most unwavering” leader. Limbaugh also called it “breathtaking” the difference between the Trump he knows and how he’s portrayed in the media.

Trump talked up his prospects in the face of grim polls, blamed media “poisoned by their own hatred “and assured Limbaugh that his recovery is going well.

The president, who was diagnosed on Oct. 1 with coronavirus and hospitalized for three days, says he wants to get back on the campaign trail as soon as this weekend.