The Latest: Barrett asked about conflict over 2020 election 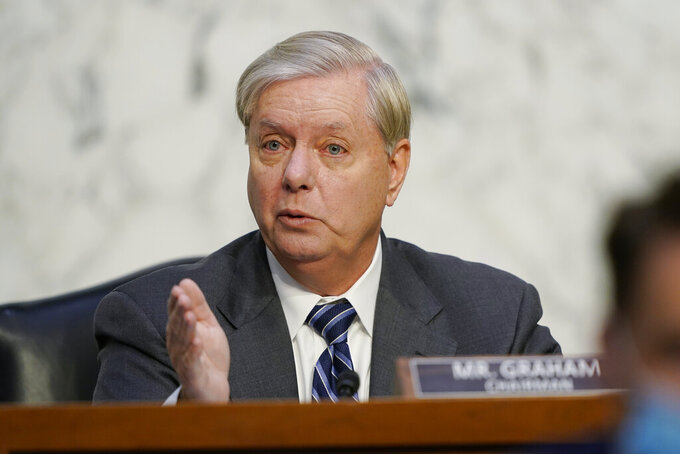 Amy Coney Barrett has been asked if there’s a potential conflict in having three Supreme Court justices who were part of the 2000 Bush v. Gore challenge being called on to decide a disputed 2020 presidential election.

Barrett told Democratic Sen. Mazie Hirono of Hawaii that “any questions of whether there was an appearance of impartiality ... would be one for all justices involved to consider under the recusal statute.” Barrett said at her confirmation hearing Wednesday that “a judge always has to consider that issue.”

But given the chance by Republican Sen. Joni Ernst of Iowa to amend her remarks, the judge did.

Barrett said she wanted to clarify that “the work that some of the justices may have done on Bush v. Gore is reason to recuse, that is certainly not what I meant.”

She said, “What I meant is that in every case, judges have an obligation to consider the issues and they may conclude, ‘No.’ What I meant to be saying was just not to take a position.”

HERE’S WHAT YOU NEED TO KNOW ABOUT THE BARRETT HEARINGS:

Supreme Court nominee Amy Coney Barrett is back on Capitol Hill for the third day of her confirmation hearings. Senators are digging deeper into her outlook on abortion, health care and a potentially disputed presidential election.

— Takeaways: Barrett is reticent as Democrats focus on health care.

Supreme Court nominee Amy Coney Barrett would not say that the Trump administration’s practice of separating children from their families at the U.S.-Mexico border was wrong.

Barrett was being questioned by Democratic Sen. Cory Booker of New Jersey about the practice during her confirmation hearing Wednesday. She said she could not be drawn into a debate about the Trump administration’s immigration policy. She has refused to engage on many issues, including whether President Donald Trump has the right to delay the election, citing the need for judicial independence.

The Trump administration separated more than 2,500 children from their parents at the border during the spring and summer of 2018. The practice was widely derided as inhumane by world leaders, lawmakers and religious groups, including by Pope Francis.

Later investigations concluded thousands more may have been separated, but the administration’s lack of records made it impossible to fully grasp how many. The administration is still in court over the policy.

The confirmation hearing for Supreme Court nominee Amy Coney Barrett paused for about 40 minutes because of audio difficulties.

The sound cut out right after Democratic Sen. Richard Blumenthal of Connecticut asked Barrett if she got some rest after a long day of questioning on Tuesday. The Indiana judge acknowledged that “I did have a glass of wine. I’ll tell you I needed that at the end of the day.”

Blumenthal said on that point, “You have a right to remain silent.”

The audio cut out again around 3 p.m., and the hearing took another unexpected break.

Democrat Joe Biden says Judge Amy Coney Barrett “seems like a decent person,” but he calls it “an abuse of power” to confirm her to the Supreme Court before votes are tallied in the presidential election.

Biden said on a campaign fundraising call Wednesday that President Donald Trump is “trying to ram through this nominee days before the election after millions of people have already voted” just so she’ll be in place to hear another challenge to the 2010 Affordable Care Act.

As a law professor, Barrett criticized a Supreme Court decision upholding the health care law, but she hasn’t said explicitly how she’d vote on the matter as a justice on the high court. The court is scheduled to hear the latest challenge to the law in Nov. 10 oral arguments.

Biden told donors that a conservative majority on the court could effectively strip more than 100 million Americans with preexisting health conditions from having guaranteed eligibility to purchase health insurance. He also noted that the additional millions of Americans who have contracted COVID-19 may expand that list because of “lung scarring and heart problems.”

Before the 2010 law, insurers could deny coverage based on an applicant’s medical history.

Sen. Chris Coons says Supreme Court nominee Amy Coney Barrett would shift the balance of the court in a more conservative direction, even if she will not say publicly she has a conservative mindset.

The Delaware Democrat was speaking Wednesday, the third day of Barrett’s confirmation hearings. He asked whether she recognized that if she were confirmed, there would be a balance shift on the court that could have “profound” implications.

Coons referred to an interview Barrett gave in which where she spoke of a balance shift should Merrick Garland have been confirmed to the high court. Garland was chosen by President Barack Obama in March 2016 after Justice Antonin Scalia died, but Senate Majority Leader Mitch McConnell refused to consider the nomination on grounds it was a presidential election year.

President Donald Trump nominated Barrett just days after Justice Ruth Bader Ginsburg died Sept. 18, and GOP senators are moving at a break-neck pace to confirm her before the election on Nov. 3.

Barrett told Coons she was referring to the fact that Garland was not an originalist, as Scalia was. Coons noted that Barrett, an originalist who claims Scalia as her mentor, would replace Ginsburg, who did not hold originalist views. That would shift the court’s 5-4 conservative majority to 6-3.

Coons said he would not vote to confirm her.

Supreme Court nominee Amy Coney Barrett won’t say whether a president can pardon himself but says she agrees no one is above the law.

Under questioning Wednesday from Democratic Sen. Patrick Leahy of Vermont, President Donald Trump’s choice for the high court offered no view on the pardon issue. Multiple investigations are looking into Trump’s taxes, his businesses and his associates.

Barrett would not offer her thoughts on whether Trump would be able to pardon himself. But she agreed with Leahy’s assertion “no one is above the law.”

Barrett is in her third day of hearings and has repeatedly refused to say how she’d rule on various issues, including abortion and the Affordable Care Act.

Republican senators are moving at a break-neck pace to confirm Barrett before the Nov. 3 election. Democrats say the process is being rushed.

The Illinois Democrat didn’t specifically say he meant President Donald Trump in Barrett’s confirmation hearing Wednesday. But he said earlier on CNN that “orange cloud” hanging over the nomination was related to Trump and the Republican president’s Tweets.

Barrett was nominated by Trump just days after the Sept. 18 death of Justice Ruth Bader Ginsburg. Durbin says that Trump has made clear he wishes to undo the Affordable Care Act and that those wishes are also a cloud over Barrett’s nomination.

Barrett has said she is not “hostile” to the Affordable Care Act and has promised to hear all arguments.

Republican senators are moving at a break-neck pace to confirm Barrett before the Nov. 3 election. Democrats say the process is being rushed.

Republican Sen. Chuck Grassley of Iowa and Democratic Sen. Patrick Leahy of Vermont have asked all recent nominees to the court whether they would favor live or same-day broadcasts of arguments. Previous nominees have also expressed openness but have cooled to the idea once they became justices.

The court has been providing live audio of arguments, held by telephone, since May due to the coronavirus pandemic — the first time it has done so. Grassley and Leahy are longtime members of the Senate Judiciary Committee and introduced legislation earlier this year to continue the practice.

While questioning Barrett on Wednesday, the 87-year-old Grassley joked it probably wouldn’t happen in his lifetime. But he says allowing cameras in the courtroom “can bring about a better understanding of the judiciary.” Leahy also urged Barrett to consider it during his round of questioning.

Republicans want to confirm Barrett before the presidential election. Democrats say Republicans are rushing the process.

Senate Judiciary Committee Chairman Lindsey Graham says the nomination of Amy Coney Barrett to the Supreme Court is a signal to young conservative women who oppose abortion that there’s “a seat at the table for them.”

Opening the second day of questioning on Wednesday, the South Carolina Republican told Barrett she has been “candid to this body about who you are, what you believe” and this is the first time a woman who is “unashamedly pro-life and embraces her faith without apology” has been nominated to the Supreme Court.

Graham says he’s “never been more proud” of a nominee.

While Barrett has repeatedly declined during her confirmation hearings to say how she would rule on abortion, senators have been clear in their questioning that they know she is opposed to it.

Barrett is the most openly anti-abortion nominee to the Supreme Court in decades. Democrats have warned her confirmation could lead to the overturning of the landmark abortion case Roe v. Wade.

Supreme Court nominee Amy Coney Barrett is back before the Senate Judiciary Committee to face more questions from senators at her confirmation hearing.

Tuesday’s session lasted nearly 12 hours. Barrett declined to voice an opinion on potential election-related litigation involving President Donald Trump or presidential transition of power. She also said she didn’t view the 1973 Roe v. Wade decision that affirmed the right to abortion as an inviolable “super-precedent” that couldn’t be overturned.

On the Obama-era Affordable Care Act, which provides health care for more than 20 million people and comes before the court next month, Barrett says she doesn’t recall seeing Trump’s statements that he planned to nominate justices who would repeal the law.

The committee is scheduled to take a preliminary vote on her nomination on Thursday. The GOP-controlled Senate is expected to confirm her before Election Day. Barrett would replace the late Justice Ruth Bader Ginsburg, shifting the court’s 5-4 conservative majority to 6-3.