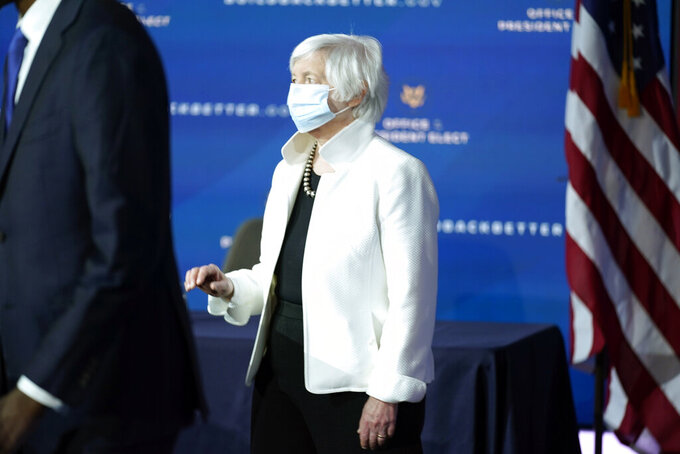 Janet Yellen, who has been is nominated by President-Elect Joe Biden to serve as Secretary of the Treasury, arrives for an event with Biden at The Queen theater, Tuesday, Dec. 1, 2020, in Wilmington, Del. (AP Photo/Andrew Harnik) 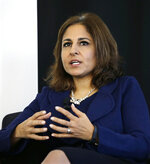 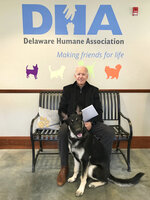 The committee raising money for President-elect Joe Biden’s inauguration will take contributions from individual donors of as much as $500,000 and from corporations of as much as $1 million.

That’s according to an inaugural official who spoke on condition of anonymity to discuss the work of the committee, which started raising money on Monday for the Jan. 20 festivities.

The committee won't accept contributions from lobbyists or the fossil fuels industry, including companies and executives whose “primary business is the extraction, processing, distribution or sale of oil, gas or coal.” The prohibition applies to political action committees run by fossil fuels interests.

The contribution limits for Biden are far lower than those of President Donald Trump in 2017.

Trump raised a record $107 million for his inauguration and accepted massive checks from individuals, including $5 million from Republican megadonor Sheldon Adelson.

— Trump headed to Georgia as a turnout driver, but also a threat

— It’s Major: Pets poised for a return to the White House

Vice President-elect Kamala Harris says there is a “hunger crisis in America now” due to the COVID-19 pandemic but promised quick action to address the challenge when in office.

Harris said that dealing with the economic fallout of the pandemic “could not be more urgent,” noting the ongoing spike in COVID-19 cases as the weather has gotten colder. She also says that in addition to the loss of hundreds of thousands of Americans, “the toll of this recession continues to mount across America.”

Harris referenced the significant number of American adults with children saying their families are going hungry, and the even higher rate of adults saying they’re having trouble paying their “essential” bills.

She says the Biden administration’s economic team, which was unveiled Tuesday, would put “working people front and center” to pursue reforms to make the economy work better for all Americans, and would “hit the ground running on day one.”

President-elect Joe Biden’s choice to run the White House budget office says social programs helped her family when she was a young girl being raised by a single mother in a Boston suburb.

Neera Tanden would help prepare Biden’s federal budgets as director of the White House Office of Management and Budget.

Word of her expected nomination has encountered early disapproval from some Republican senators who will vote on whether she becomes the first woman of Indian descent to lead the office.

Tanden says her mother faced hard choices after divorce left her to raise two young children. She says her family survived on food stamps and federal housing vouchers until her mother got a job and eventually bought a house.

Tanden says she wants to give people the same chance at a fair shot.

Treasury Secretary nominee Janet Yellen is describing the economic crisis brought on by the COVID pandemic as an “American tragedy” and warning that without quick action to address it, the damage will get worse.

Introducing herself during a Joe Biden transition event where the president-elect unveiled his economic team, Yellen spoke about the “historic crises” of the pandemic and the economic fallout resulting from it, as well as the “disproportionate impact” it has had on “the most vulnerable among us.”

Speaking about a pandemic that has cost 268,000 American lives, Yellen referenced the “lost lives, lost jobs” and struggles Americans face “to put food on the table and pay bills and rent.”

She went on to say that “it’s essential that we move with urgency” because “inaction will produce a self-reinforcing downturn causing yet more devastation.” She pledged to Americans that the Treasury would be “an institution that wakes up every morning thinking about you.”

President-elect Joe Biden says his economic team is “first rate” and will help build an economy that works for all Americans.

Biden introduced key members of the team Tuesday in Delaware, including former Fed chair Janet Yellen to become Treasury secretary. Biden described Yellen as one of the “most important economic thinkers of our time.”

She would be the first female Treasury secretary if confirmed by the Senate.

Biden also introduced Neera Tanden as his choice to run the White House budget office. Tanden’s nomination, however, has encountered early disapproval from some Senate Republicans, who will vote on her nomination.

Joe Biden is calling on Congress to pass a “robust package for relief” to address the economic and public health crisis brought on by the COVID pandemic.

The president-elect made the comments introducing his economic team in Wilmington, Delaware, on Tuesday. Congressional leaders have been locked in a stalemate over a COVID relief package, with Democrats and Republicans unable to agree on the price tag or content of a potential bill, though a team of bipartisan lawmakers released their own compromise legislation on Tuesday.

Biden said, however, any package passed during the lame duck session of Congress would be “at best just a start” and that his team is already working on his own proposal for the new Congress “to address the multiple crises we’re facing.” He said the team of economic advisers he announced Tuesday would play a “critical role” in shaping the Biden administration’s plan to revive the economy.

Joe Biden is wearing a boot publicly for the first time, after fracturing his foot while playing with one of his dogs over the weekend.

The president-elect wore the boot at an event where he introduced his economic team Tuesday afternoon, walking with no obvious limp onto the stage. His doctor said Sunday that he suffered small fractures to his right foot from the incident and would likely have to wear a walking boot “for several weeks.”

Arriving to the event, Biden pointed to the boot and raised his leg as if to show it off. He walked gingerly, telling reporters his foot was “good.” The event was set up with chairs and tables, allowing Biden to sit when he wasn’t speaking before a podium in the center of the stage._