The Latest: Biden vows to unite an America mired in crises 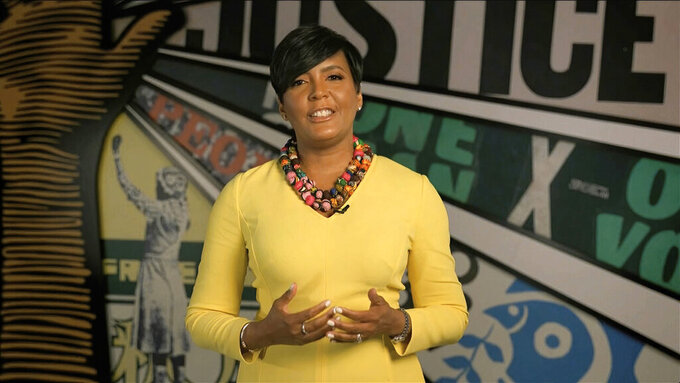 Joe Biden is vowing to unite an America torn by crisis and contempt.

Biden accepted the Democratic presidential nomination on Thursday, achieving a pinnacle in an unfinished quest that has spanned three decades and been marred by personal tragedy, political stumbles and more dynamic rivals.

The past hurdles fell away as Biden addressed his fellow Democrats and millions of Americans at home who he hopes will send him to the White House to replace Donald Trump.

Biden declared, “Here and now I give you my word, if you entrust me with the presidency, I will draw on the best of us, not the worst.” He said, “I’ll be an ally of the light, not our darkness.”

The night’s keynote address was the speech of a lifetime for Biden, who at 77 would be the oldest president ever elected if he defeats President Donald Trump in November.

HERE’S WHAT YOU NEED TO KNOW ABOUT THURSDAY’S DEMOCRATIC NATIONAL CONVENTION:

— Takeaways from the final night of the Democratic convention

— For Biden, a long path to a potentially crucial presidency

The Democratic Party officially has its presidential nominee.

Biden served three decades as a senator from Delaware before being tapped as President Barack Obama’s vice president. He first ran for president in 1988 and tried again in 2008 before launching his 2020 campaign last year.

President Donald Trump will formally be renominated as his party’s candidate during the virtual Republican National Convention next week.

The general election is 75 days away. Trump has been struggling in the polls amid a confluence of health, economic and racial crises.

A boy whom Joe Biden bonded with on the campaign trail over their joint struggles with stuttering says the former vice president is “someone who cares.”

Brayden Harrington met Biden at an event in New Hampshire and asked for help overcoming his stutter. Biden struggled with a stutter as a boy and continues to counsel youngsters who are going through the same.

Brayden said at Thursday’s Democratic National Convention that Biden told him he improved his speaking by reading aloud verses by the poet Yeats.

Brayden says, “Joe Biden made me feel confident about something that’s been bothering me my whole life.”

He added: “Without Joe Biden, I wouldn’t be talking to you today.”

Businessman Mike Bloomberg is urging Americans to evaluate President Donald Trump like a coworker or employee when deciding whether to give him another term.

At Thursday’s Democratic National Convention, Bloomberg asked: “Would you rehire or work for someone who ran your business into the ground, and who always does what’s best for him or her, even when it hurts the company?”

He asked, “If the answer is no, why the hell would we ever rehire Donald Trump for another four years?”

Bloomberg’s addition to the convention lineup is another example of Biden trying to appeal to moderate and even Republican voters. Bloomberg has been a Republican, independent and a Democrat throughout his career.

Pete Buttigieg says his experience as an openly gay man and military veteran shows how far the U.S. has come in just a few years and how much farther it has to go.

The former mayor of South Bend, Indiana, says when he was born in 1982, it was unthinkable for an openly gay person to seek any federal office. Yet he noted Thursday at the Democratic National Convention that he had campaigned for the presidency.

He says he did so “often with my husband at my side, winning delegates to this very convention.”

Buttigieg, a combat veteran in Afghanistan, also noted that when he joined the military, “firing me because of who I am wasn’t just possible — it was policy,” because of “Don’t ask, don’t tell.”

He said there’s still a long way to go in making America a place of healing and not exclusion, but he says if things changed so much in major social issues for the country over the last 10 years, imagine how much they could during the next.

“Joe Biden is right,” Buttigieg said. “This is a contest for the soul of the nation.”

Joe Biden is honoring his late son Beau as he prepares to accept the Democratic nomination for president.

A video tribute that aired Thursday at the Democratic National Convention recalled Beau Biden through his life as a major in the Army National Guard and as Delaware’s attorney general.

Beau died in 2015 of brain cancer. Biden often speaks of his son on the campaign trail as one of his heroes, and in the video he was described as an “inspiration” to his father even now.

The video featured President Barack Obama delivering Beau Biden’s eulogy, saying that “some folks may never know that their lives are better because of Beau Biden, but that’s OK.”

The video’s voiceover declared of Beau that “you never had to ask if he’d do something the right way — he didn’t know any other way.”

The video closed with Beau’s own words from his 2008 convention speech. He told the audience that he wouldn’t be able to be with his father during the fall campaign and asked them to “be there for my dad like he was for me.”

Sen. Tammy Duckworth says Donald Trump is a “coward in chief” who has proved himself unfit to lead the U.S. armed forces.

The Illinois Democrat and military veteran lost her legs during a helicopter crash while serving in Iraq. She said at Thursday’s Democratic National Convention that Joe Biden understands the sacrifices military families make.

Biden’s late son Beau served as a major in the Army National Guard.

Duckworth says Trump, on the other hand, is uninterested, doesn’t read his daily briefing and has been manipulated by dictators who are enemies of the U.S.

Wisconsin Sen. Tammy Baldwin is sharing her struggles with a childhood illness to tout the importance of health coverage for preexisting conditions.

Baldwin said at the Democratic National Convention on Thursday that she was hospitalized for three months as a 9-year-old. Her grandparents were her caregivers, and their insurance did not cover her. Baldwin says she then struggled to get health insurance as an adult.

She asks: “Do we want to be a country where medical bills bury people in debt?”

Baldwin is touting her support under the Obama-Biden administration for the Affordable Care Act. It allows young people to stay on their parents’ insurance until they are 26.

Baldwin spoke from Milwaukee, the city where the convention was set to be held before the coronavirus pandemic forced most of the events to be held virtually.

The final night of the Democratic convention was designed to be Joe Biden’s moment to soar.

But actor and comedian Julia Louis-Dreyfus, the master of ceremonies on Thursday, gave him a run for his money, uncorking a brutal roast of President Donald Trump.

“American carnage,” she said, referring to the dominant theme of Trump’s inaugural speech. “I assumed that was something he was against, not a campaign promise.”

Invoking Biden’s Catholic faith, she mocked a recent Trump photo op outside a church during protests against police brutality.

“Just remember: Joe Biden goes to church so regularly, that he doesn’t even need tear gas and a bunch of federalized troops to help him get there,” she said.

Later, following a segment on voting, she quipped: “If we all vote, there is nothing Facebook, Fox News or Vladimir Putin can do to stop us.”

Cory Booker has evoked the memory of his late grandfather to argue that Joe Biden and Kamala Harris can bolster unions and empower the middle class.

“Joe Biden and Kamala Harris know the dignity of all working Americans,” the New Jersey senator said Thursday on the final night of the virtual Democratic National Convention. “They know the urgency and the demand of our dream.”

Booker says the Trump administration’s policies have left “working people under attack” and the middle class shrinking. Booker says, “He has failed us.”

Booker added of his grandfather, “If he was alive, Joe and Kamala, he would be so proud of you.”

“And he’d tell us, take another by the hand, and another, and let’s get to work,” Booker said. “This dream ain’t free, you gotta work for it.”

“Congressman Lewis would not be silenced, and neither can we,” Bottoms said. “We cannot wait for some other time, some other place, some other heroes.”

Lewis represented the Atlanta area in Congress for decades. He was among a group of freedom riders who were beaten by Alabama State Police on the Edmund Pettus Bridge in Selma in 1965.

Before he died of cancer in July, he published an essay encouraging people to exercise their right to vote.

Bottoms said Lewis was a “God-fearing man who did what he could to fulfill the as-of-yet-unfulfilled promise of America.”

And she urged others to live up to his call.

“We must register and we must vote,” Bottoms said.

Democrats are opening the fourth and final night of their convention with a not-so-subtle dig at Republicans mispronouncing Democratic vice presidential nominee Kamala Harris’ first name.

Harris is the child of immigrants, and her first name reflects her Indian heritage. Her name is pronounced “comma-la,” like the punctuation mark.

But President Donald Trump and other members of his party have been saying it wrong, even after they have been corrected.

The bit came after brief remarks by Yang, who ran in the Democratic primary.

California Gov. Gavin Newsom says wildfires raging in his state should give pause to anyone who denies climate change.

Newsom spoke at the virtual Democratic National Convention on Thursday from a forest near California’s Central Coast after visiting a nearby Red Cross evacuation center.

More than two dozen major wildfires were blazing across California, blanketing cities and towns in smoke and putting tens of thousands of people under evacuation orders.

Newsom recorded the video after choosing to scrap the prerecorded video he originally recorded.

“I confess this is not where I expected to be speaking here tonight,” he said in a video recorded on a cellphone.

He added, “If you are in denial about climate change, come to California.”

Newsom criticized President Donald Trump for working to roll back vehicle emission standards meant to curb climate change and for threatening to withhold funding from California.

President Donald Trump says “Joe Biden is no friend of Pennsylvania” as he criticizes the presumptive Democratic presidential nominee near his childhood hometown of Scranton.

Trump is attempting to frighten voters about the future of their retirement investments as well if Biden is elected, and he bragged that markets are up despite the coronavirus.

He’s also evoking images of violence in some of the nation’s biggest cities during his own presidency, saying it will only spread if Biden is elected. He says that if voters “want a vision of your life under a Joe Biden presidency, imagine the smoldering ruins of Minneapolis” and “the violent anarchy of Portland” coming to every city.

“There’s only one thing standing between your family and the radical left-wing mob,” he says. “And that’s your vote this November.”