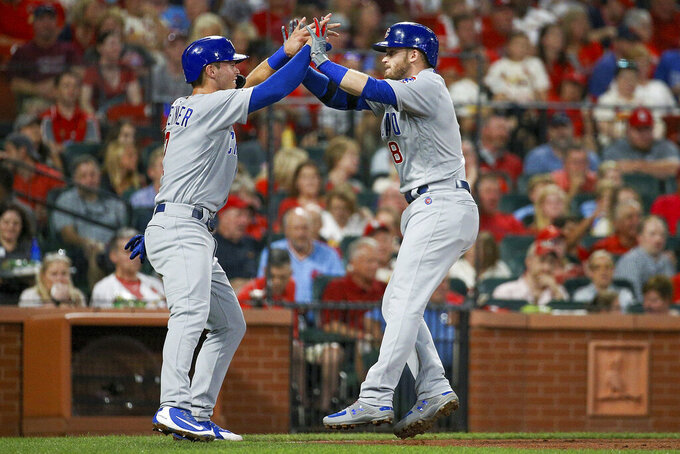 FILE - In this Sept. 28, 2019, file photo, Chicago Cubs' Nico Hoerner, left, celebrates with teammate Ian Happ after Happ hit a two-run home run during the third inning of a baseball game against the St. Louis Cardinals in St. Louis. When the coronavirus pandemic stopped spring training last month, Ian Happ offered Nico Hoerner, Zack Short and Dakota Mekkes a place to stay if they wanted to remain in Arizona. That's how “The Compound” was born. (AP Photo/Scott Kane, File)

The Big Sky Conference is leaving the decision of when to return to sports up to its member schools.

The conference also adjusted the schedule of volleyball, track, women’s soccer, softball and tennis for the 2020-21 school year in an effort to limit travel as schools face mounting budget issues.

The annual football kickoff event held the last two years in Spokane, Washington, will now be conducted as a virtual event.

The Drone Racing League on Monday announced a fantasy virtual drone racing series to raise money for protective gear for health care workers in the effort against the new coronavirus.

The eight-week series will feature 12 pilots flying digital versions of custom drones through maps and on new tracks, all from their homes around the world, including the United States, Canada, Britain, and Switzerland.

DRL President Rachel Jacobson says all pilots have committed to donating their winnings to Direct Relief, the largest charitable provider of protective gear and medical essentials to health facilities in response to COVID-19.

The series begins Saturday on NBC Sports Network and Twitter. League officials plan to put a value on the amount of money involved after the first broadcast.

Canada’s National Bank is offering cash grants to each of 23 tennis players from the country who are facing financial issues because of the coronavirus pandemic.

The money will help professionals ranked from 100 to 750 in singles or between 25 and 100 in doubles, members of the top 100 in the ITF junior rankings who are transitioning to the pros, and players in the top 50 of the ITF wheelchair rankings.

All sanctioned tennis events have been called off since March because of the outbreak, and all tennis events in Canada are called off until the end of August, except for the Rogers Cup men’s tournament in Toronto. The WTA and ATP are suspended until at least mid-July everywhere.

The 25-year-old Happ is partnering with Connect Roasters for Quarantine Coffee. It costs $15 per bag, and $3 from every sale goes to virus-related causes.

Happ calls himself a “coffee connoisseur” and says Quarantine Coffee is for everyone “searching for the perfect morning cup.”

Happ is keeping busy while he waits for word on the major league season, which has been delayed by the pandemic. He has been living with three other players from the Cubs organization in a house in Arizona. The group has been posting videos of its daily activities and doing a podcast.

The Big South Conference has announced it is delaying for one year the neutral-site format for its conference basketball championships due to the coronavirus.

The conference plans to return to on-campus sites for both the men’s and women’s basketball championships next March before moving the championship to Bojangles’ Coliseum in Charlotte, North Carolina in 2022.

The soccer, volleyball, lacrosse and softball championships will be held on campus. Baseball will remain at SEGRA Stadium in Fayetteville, North Carolina.

The conference also said its football and basketball media days, as well as most planned conference meetings, will be held virtually.

Members of a golf club whose course straddles the border of England and Wales are in a state of limbo after conflicting rules were issued by government officials during the coronavirus pandemic.

Llanymynech Golf Club has 15 holes in Wales and three in England. A sign on the fourth hole reads: “Drive in Wales. Putt out in England.”

It has left the club’s members with quite the headache.

British Prime Minister Boris Johnson is loosening restrictions during lockdown to allow people in England to play golf with at most one other person from Wednesday as long as they abide by social distancing measures. However, people in Wales have been told by their devolved government they must stay at home and that golf courses should remain closed.

Llanymynech club secretary Sian Whiteoak has told Sky Sports “a number of calls” have been made to authorities and “we await clarification before we make any decisions.”

Llanymynech is also well known for being the home course of former Masters champion Ian Woosnam.

The Belarus soccer federation has postponed two matches because players from two teams are suspected of being infected with the coronavirus.

Federation spokesman Alexander Aleinik says the players are from first-division club Minsk and second-division team Arsenal Dzerzhinsk. He did not name the players.

Minsk and Neman Grodno were to play on Friday and Arsenal was to face Lokomotiv Gomel on Saturday.

Soccer matches have been played in Belarus throughout the pandemic but attendance at recent matches has been thin and spectators have been seated in staggered formation in the stands.

Soccer in the country has been suspended since March 13 because of the coronavirus pandemic but Chancellor Angela Merkel said last week it could return subject to strict measures. The league then announced the men’s Bundesliga and second division would resume on May 16.

The German Cup final has been rescheduled for July 4. The semifinals will be played on June 9 and 10. The women’s cup final is slated for the same day as the men’s.

Federation president Fritz Keller says all the matches will likely be played in empty stadiums “but I am convinced that this is by far the best solution.”

The Premier League says it hopes government authorities will allow all 20 stadiums to be used if the competition resumes next month.

The police had asked that games be played in neutral venues but that plan was opposed by many relegation-threatened clubs who believe it harms the sporting integrity of the league.

Liverpool led the league by 25 points when it was halted in March because of the coronavirus pandemic. There are nine games remaining.

Premier League chief executive Richard Masters says “it is the preference of all of our clubs to play at home if possible.”

Masters says clubs discussed what would happen if the season had to be curtailed for the first time.

The Turkish Basketball Federation says it is canceling its season amid the coronavirus outbreak.

Federation president Hidayet Turkoglu says the decision was reached following consultations with all basketball clubs and no team will be declared champion.

Turkoglu says “this was the best decision for basketball.”

Turkey suspended all league sports in March but the country’s soccer federation announced last week it plans to resume games on June 12 and host the Champions League final in Istanbul in August.

The American Hockey League has canceled the rest of its season because of the coronavirus pandemic.

President and CEO David Andrews says “the resumption and completion of the 2019-20 season is not feasible in light of current conditions.”

The league’s board of governors made that determination in a conference call Friday.

The AHL suspended its season on March 12 after the NHL did. The league hopes to be back next season but that is in jeopardy if sports must be played in empty arenas.

The British government has told sports bodies to prepare for the resumption of events in England but not before June and not with fans in stadiums.

Sports have been shut down in Britain since March because of the coronavirus pandemic.

A government document says Step 2 of the plan for easing the lockdown includes “permitting cultural and sporting events to take place behind closed doors for broadcast.”

The document states that the resumption cannot happen before June 1.

The government says permitting large crowds in sports stadiums “may only be fully possible significantly later depending on the reduction in numbers of infections.”

The Turkish volleyball league has been canceled amid the coronavirus pandemic.

He says “the men’s and women’s leagues have been registered as they stand.”

Turkey suspended all league games on March 20 but the country’s soccer federation announced last week it plans to resume games on June 12 and host the Champions League final in Istanbul in August.

Pliskova says “it’s a great opportunity for us to play a unique tournament.”

The first of the four tournaments that are part of the competition is scheduled for June 13-15 in Prague.

Players were back in action at the team’s training center two months after the league was suspended because of the coronavirus pandemic.

Most clubs had already resumed individual sessions. Barcelona restarted on Friday and Atlético Madrid on Saturday.

All players were tested for COVID-19 before being allowed to practice.

The head of Japanese baseball says the 12-team league is hoping to start play next month but no specific date has been set.

Japan is living under a state of emergency that is in effect until May 31.

Saito says the All-Star game in July has been canceled for the first time since it was initially held almost 70 years ago. The Japanese season was originally scheduled to open on March 20.

Tohoku Medical and Pharmaceutical University professor Mitsuo Kaku says it would be difficult to set a date for the season to start with the state of emergency still in effect.

Baseball has begun in Taiwan and South Korea in empty stadiums.

The Portuguese soccer federation says the league, clubs and players must take responsibility for the consequences of the return to soccer in the country amid the coronavirus pandemic.

The federation says that is the first condition stipulated by government authorities to allow the Portuguese league and the Portuguese Cup to resume as planned by the end of the month.

The federation says the league, clubs and players at all times “assume the risk of infection” and “bear the responsibility” of all possible consequences related to the disease and to “the risk for public health.”

The federation says it received a set of conditions from the government on Sunday.

The government recently said it would allow the league and the cup to resume on May 30. The second division was canceled.

Zlatan Ibrahimovic is expected to return to Italy to spend two weeks in quarantine ahead of the potential return of the Serie A season with AC Milan.

He leaves behind plenty of questions in his native Sweden.

Ibrahimovic has been keeping up his fitness by training with Hammarby. He bought a nearly 25% stake in the Stockholm-based club last year in his first move into soccer ownership. The striker practiced with the men’s and women’s teams and played in a training match because Sweden is not under strict lockdown measures during the coronavirus pandemic.

The 38-year-old Ibrahimovic could return to the club as a player in the final years of his career.

Milan and most of the other Italian league clubs resumed training on an individual basis last week before full team training restarts next Monday.