The Latest: Birx says Americans must be strict for pandemic 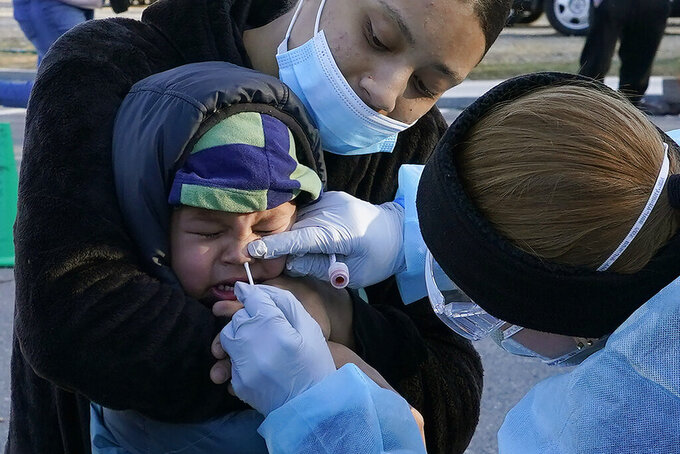 UNITED NATIONS — The White House coronavirus response coordinator says Americans must not gather indoors with outsiders or take off their masks at any time when they are outdoors -- even when they are eating and drinking.

Dr. Deborah Birx says people also have to observe social distancing and wash their hands to contain the coronavirus pandemic. She says some states are taking these measures, but in others it’s “not happening at the level that they need to happen.”

Birx says that even once vaccines are approved, it will take weeks to months before “the most vulnerable individuals in America” can be immunized.

She made the comments after meeting with U.N. Secretary-General Antonio Guterres and General Assembly President Volkan Bozkir at U.N. headquarters in New York on Thursday.

— Getting vaccine to right people could change course of pandemic in U.S.

— Facebook says it will remove misinformation about coronavirus vaccines

SEOUL, South Korea — South Korea has recorded 629 new coronavirus cases over the past 24 hours, the highest daily tally in about nine months.

The Korea Disease Control and Prevention Agency said Friday that 600 of the newly confirmed patients were domestically transmitted cases — nearly 80 % of them in the densely populous Seoul area, which has been at the center of a recent viral resurgence.

After successfully suppressing two previous outbreaks this year, South Korea has been grappling with a fresh spike in infections since it relaxed stringent social distancing rules in October. Last week, it toughened distancing restrictions in the greater Seoul area and other places.

DOVER, Del. — Delaware’s governor is issuing a stay-at-home advisory and implementing a universal mask mandate requiring people to wear cloth face coverings even in their own homes if someone outside the immediate household is present.

Gov. John Carney on Thursday also recommended that schools suspend in-person instruction from Dec. 14 to Jan. 8 and resume hybrid learning on Jan. 11. Winter sports competitions will be prohibited during that period.

The mask mandate will require all Delawareans to wear cloth face coverings anytime they are indoors with anyone outside their immediate household. Delaware has had a public mask mandate since April 28 requiring use of face coverings in public settings where social distancing is not possible.

A spokesman for the governor says officials are relying on voluntary compliance with the mask mandate.

The 192 fatalities announced Thursday matched the 24-hour toll reported May 13, at the height of the initial wave of the pandemic in Illinois. The number is second only to the 238 deaths reported Wednesday.

MONTREAL — The Quebec government is cancelling its plan to allow gatherings over four days of the Christmas holidays.

Premier Francois Legault announced Thursday that the province will no longer permit multi-household gatherings of up to 10 people from Dec. 24 through Dec. 27 as had been planned.

Legault first announced the Christmas plan on Nov. 19, saying people could get together as long as they quarantined for a week before and a week after the holiday period. But coronavirus infections, COVID-19 hospitalizations and deaths are on the rise and the province’s health system is deemed fragile due to a lack of staffing.

Legault says it’s not realistic to think the numbers will go down sufficiently by Christmas.

PHILADELPHIA — Hospital beds are filling up and medical staffs are being stretched as Pennsylvania’s health care system copes with a growing number of seriously ill COVID-19 patients.

State health officials say nearly half of all hospitals in the south-central region of the state and a third in the southwest anticipate staffing shortages within a week.

Pennsylvania’s top health official said Thursday that modeling indicates the state will run out of intensive care beds this month. More than 85% of the state’s ICU beds are occupied now.

But Dr. Rachel Levine added that she is even more concerned about hospital staffing. She notes that hospitals’ medical-surgical beds can be converted into ICU beds, but the supply of medical workers is “not infinite.”

RALEIGH, N.C. — North Carolina on Thursday reported its highest single-day increase in coronavirus cases since the start of the pandemic, with more than 5,600 people testing positive for the coronavirus. The proportion of tests coming back positive has also risen sharply in recent days. On Sunday, the positivity rate surpassed 10% for the first time since April.

And for the first time ever, more than 2,100 people are currently hospitalized due to COVID-19. On Wednesday, the state reported a daily increase of 82 deaths, which is the most since the start of the pandemic.

At a time when all available metrics appear to show transmission at or near its worst levels yet, the state has shown strong reluctance to impose additional restrictions to help slow the spread.

An executive order Democratic Gov. Roy Cooper signed last week included stronger language aimed at boosting enforcement of the statewide mask mandate. Ahead of Thanksgiving, he reduced indoor gatherings from a maximum of 25 people to 10 people.

They could arrive as early as mid-December. Hospital leaders say the first doses in Utah will go to front-line health care workers such as doctors and nurses in emergency departments.

They will also be given to urgent care facilities and COVID-19 units as well as their housekeeping employees. Five hospitals that experienced the highest COVID-19 response will be first to receive doses.

Each hospital is expecting to receive several thousand doses of Pfizer’s vaccine. Officials did not say how many doses each hospital will receive.

PORTLAND, Maine — An online portal designed to help Maine’s hospitality and tourism businesses obtain grants crashed on the day it was scheduled to start taking applications.

The Portland Press Herald reports business owners reported problems with the portal after it opened at 9 a.m. on Thursday.

The Maine Department of Economic and Community Development shut down the application less than two hours after it opened. The department says the portal will be open for applications again starting Friday morning.

The tool allows businesses to apply for up to $20,000 in grants as part of a $40 million aid program announced by Democratic Gov. Janet Mills earlier in the week.

CARSON CITY, Nev. — Nevada reported 48 new deaths from the coronavirus on Thursday, marking the deadliest day since the onset of the pandemic as the state’s COVID-19 surge shows few signs of slowing and death totals peak throughout the U.S.

Case and death totals continue to rise more than a week after new restrictions were implemented as part of Nevada’s statewide pause of activity.

During the three-week period, the number of guests businesses can accept has been reduced to 25% of capacity.

Hospitals continue to face strain and Renown Regional Medical Center in Reno is treating patients in an auxiliary unit in the parking garage.

PARIS — French Prime Minister Jean Castex said the first doses of COVID-19 vaccines will go to nursing homes residents when they will be available in the country, not before the end of the month.

Castex presented on Thursday the country’s vaccination program for the 67-million inhabitants country.

Vaccines will be made available for free, he said. He reaffirmed vaccination won’t be mandatory.

Health minister Olivier Veran said the Pfizer/BioNTech COVID-19 vaccine, which is expected to arrive first, will go to nursing home residents and some staff working there who are more vulnerable due to their health condition.

The vaccination campaign will then be gradually extended to the elderly and more fragile people, then to the whole population.

France last week passed the milestone of 50,000 dead in the pandemic.

Frye said 33,000 doses of the vaccine developed by Pfizer is expected by Dec. 13 or 14 and a shipment of a second, required, dose is expected about three weeks later.

The plan follows a draft distribution plan released by the health department in October and places first responders such as paramedics, police officers and firefighters in addition to the elderly and those at high risk in the second phase of people to receive the vaccine.

School students teachers and staff are in the third phase of those to receive the vaccine, then the general public. The priority list was developed by a committee using guidelines provided by the federal Centers for Disease Control, Frye said.

The seven-day rolling average of new cases in Oklahoma rose from 2,727 per day on Nov. 18 to 2,571 on Monday and the positivity increased from 15.8% to 16.34% during the same time, according to data from Johns Hopkins University. T

The state health department on Thursday reported an additional 1,707 virus cases and 24 more deaths for totals of 204,048 cases and 1,836 deaths since the pandemic began in March. There were 1,734 people hospitalized due to the virus.

LONDON — The United Kingdom has become the fifth country to officially record more than 60,000 coronavirus-related deaths.

That news comes just three weeks after reaching 50,000. The British government reported another 414 deaths, taking the confirmed total to 60,113.

The U.K.’s actual death toll is widely considered much higher because it only counts those who tested positive for the virus and doesn’t include those who died of COVID-19-related symptoms after 28 days.

England lifted its lockdown Wednesday amid evidence that new cases are falling. However, restrictions remain in most parts of the country, along with Scotland, Wales and Northern Ireland.

MILAN — Italy recorded a pandemic-high 993 deaths in the last 24 hours.

That tops the previous high of 969 during the deadly peak in March. The number of new daily coronavirus cases reached 23,225 on Thursday, falling after three tiers of regional restrictions put in a month ago.

The government is set to announce new restrictions for the holidays, including keeping ski areas closed and banning travel between regions from Dec. 21 through Jan. 6.

WASHINGTON — Three former presidents say they’d publicly take a coronavirus vaccine, once one becomes available, to encourage all Americans to get inoculated.

Barack Obama said during an episode Thursday of SiriusXM’s “The Joe Madison Show” that he may be filmed getting vaccinated, “just so that people know that I trust this science.”

A spokesman for Bill Clinton suggested similar. George W. Bush’s chief of staff told CNN that Bush was ready to do similar. Those comments come as the coronavirus surges nationwide and even though potential vaccines may not be widely available for months.

The coronavirus has killed more than 273,000 Americans and infected nearly 14 million people nationwide.

MEXICO CITY — Mexico’s president says he plans to give the military a role in distributing coronavirus vaccines, which he says U.S. President Donald Trump helped him get after a meeting in Washington in July.

López Obrador suggested Mexico will wait until U.S. regulators approve the Pfizer vaccine later this month before giving it the go-ahead in Mexico.

On Wednesday, Mexico’s Health Department signed a contract for 34.4 million doses and hopes to get 250,000 doses in December. Each person requires two doses.

The president says the government is discussing with “the army and the navy, and we are defining the whole operation” to distribute the vaccine. López Obrador has given the military an unprecedented array of responsibilities in his two years in office, including distributing medical supplies and guarding hospitals.

Mexico has registered 1.1 million confirmed cases and 107,500 confirmed deaths, the fourth-highest death toll in the world. However, there’s little testing and health officials estimate the actual death toll is likely closer to 150,000.