The Latest: Boris Johnson to urge global unity against virus 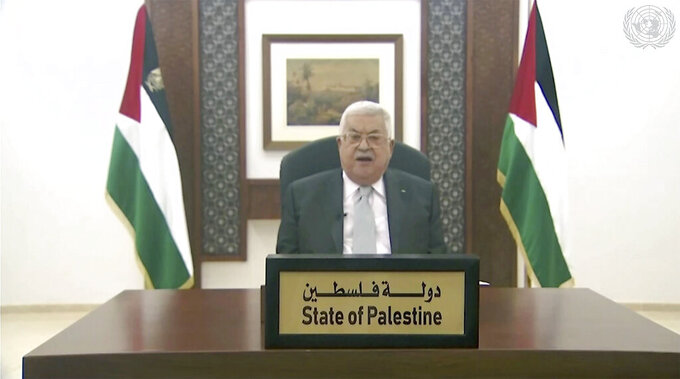 In this image made from UNTV video, Palestinian President Mahmoud Abbas speaks in a pre-recorded message which was played during the 75th session of the United Nations General Assembly, Friday, Sept. 25, 2020, at UN headquarters, in New York. (UNTV via AP)

British Prime Minister Boris Johnson will tell the U.N. General Assembly that the coronavirus pandemic has frayed the bonds between nations and will urge world leaders to unite against the “common foe” of COVID-19.

Johnson’s office says he’ll use his speech on Saturday to say that nine months into the pandemic, “the very notion of the international community looks tattered.”

The prime minister's 10 Downing St. office says Johnson will call for countries to share more data on disease outbreaks and to stop slapping export controls on essential goods as part of efforts to prevent future pandemics.

Johnson, who was hospitalized with COVID-19 in the spring, is seeking to counter the impression that Britain is retreating from the world stage in the wake of its departure from the European Union.

Ethiopia’s Nobel Peace Prize-winning prime minister, Abiy Ahmed, has told the annual U.N. gathering of world leaders that the country has “no intention to harm” Egypt and Sudan, which are downstream from a hydroelectric dam Ethiopia is building on the Nile River and has led to talk of potential military action.

Egyptian President Abdel-Fattah el-Sissi also used his U.N. speech this week to describe the dam, Africa’s largest, as an existential threat. Even U.S. President Donald Trump has intervened in the dispute between two of Africa’s most populous and powerful nations, directing the State Department to suspend some aid to Ethiopia over “lack of progress” in talks among the countries.

Negotiations continue on a deal that must address how to resolve future disputes.

Abiy also warned of a cascade of crises, including a locust outbreak, climate change and the COVID-19 pandemic, saying they threaten to “wipe out the livelihoods of millions of our people.”

He reaffirmed his commitment to the reforms that in part led to his Nobel Peace Prize, despite the “resistance that comes with trying to shift the status quo in favor of social justice.” He faces a major challenge from deadly unrest as long-marginalized groups seek more say and once-suppressed grievances flare up.

Khan said Friday that Islamophobia prevails in India today and threatens the close to 200 million Muslims who live there.

In a prerecorded speech to the U.N. General Assembly, Khan said, “They believe that India is exclusive to Hindus and others are not equal citizens.”

India’s U.N. representative, T.S. Tirumurti, said on Twitter that Khan’s speech was “a new diplomatic low” full of “vicious falsehood.” He said India would offer a further rebuttal later Friday, when it will have an opportunity to reply under U.N. rules.

Khan has frequently criticized the decision by the government of Prime Minister Narendra Modi in August 2019 to strip Jammu and Kashmir’s statehood, scrap its separate constitution and remove inherited protections on land and jobs. India’s security clampdown has sparked protests, and U.N.-appointed independent experts have called on the Indian government to take urgent action.

India accuses Pakistan of arming and training insurgents fighting for Kashmir’s independence from India. Pakistan denies the charge and says it offers only diplomatic and moral support to the rebels.

The Kashmir region is split between India and Pakistan, which have fought two wars over the territory.

Khan, as he did in his speech before the world body last year, also condemned the targeting of Muslims in many countries and provocations and incitement “in the name of free speech.”

Despite Khan’s outcry at the treatment of Muslims worldwide, Pakistan has not criticized China’s assault on its Muslim minority Uighur population. Pakistan’s silence, like that of other influential Muslim nations, is linked to its economic ties to China. Pakistan is heavily indebted to China and the two countries have a long history of cooperation both economically and militarily.

European Union leader Charles Michel used the virtual pulpit of the U.N. General Assembly on Friday to lash out at Britain, which is threatening to renege on parts of the withdrawal treaty it signed with the EU. He warned that the 27-nation bloc won’t back down in the final weeks of acrimonious talks on a free-trade deal.

“Respect for treaties, a basic principle of international law, comes to be considered optional even by those who, until recently, were its historical guarantors,” Michel said, in an unmistakable references to the United Kingdom.

The United Kingdom is a founding nation of the United Nations and a member of the Security Council, and the country has been a global diplomatic juggernaut for centuries.

Michel’s ire was raised when British Prime Minister Boris Johnson said he would contemplate breaking an agreement he signed with the EU.

The EU insists the full withdrawal bill must be respected for fear that it otherwise might re-ignite tensions on the island of Ireland. Northern Ireland has special status in the withdrawal agreement because it is the only part of the U.K. that shares a land border with an EU country.

Britain and the EU jointly promised in the Brexit divorce agreement to ensure there are no customs posts or other obstacles on the Northern Ireland-Ireland border. The open border is key to the stability that underpins the 1998 peace settlement that ended decades of violence between Irish nationalists and British unionists.

Palestinian President Mahmoud Abbas has called for an international conference early next year to “launch a genuine peace process” while criticizing the recent decision of two Arab countries to normalize relations with Israel.

In an address before the U.N. General Assembly on Friday, Abbas seemed to acknowledge the growing international weariness with the decades-old conflict, saying “I wonder what more I can say after all I’ve said on countless occasions.”

The Palestinians have rejected President Donald Trump’s proposal to end the conflict that overwhelmingly favors Israel, and have officially cut off contacts with both the U.S. and Israel. Instead, they have called for a multilateral peace process based on U.N. resolutions and past agreements.

They have also rejected the decision of the United Arab Emirates and Bahrain to normalize ties with Israel, viewing it as a betrayal of the longstanding Arab consensus that recognition of Israel should only come in exchange for territorial concessions.

In his speech, Abbas said the agreements, signed at the White House earlier this month, are a “violation” of the “principles of a just and lasting solution under international law.”

Abbas spoke before a large plaque reading “State of Palestine.” The Palestinians upgraded their status to “observer state” at the U.N. in 2012.

Abbas closed by saying “there can be no peace, no security, no stability, no coexistence in our region without an end to the occupation.”

Pope Francis has urged world leaders to use the coronavirus emergency as an opportunity to reform the injustices of the global economy and “perverse logic” of the nuclear deterrence doctrine, saying increased isolationist responses to the world’s problems “must not prevail.”

Francis laid out his appeal for greater involvement and influence of the United Nations in protecting the poor, migrants and the environment in a videotaped speech Friday to the United Nations General Assembly, held mostly virtually this year because of the pandemic.

Francis said the world has a choice to make as it tries to emerge from the COVID-19 crisis and address the grave economic impact it has had on the planet’s most vulnerable: greater solidarity and multilateralism, or a self-retreat into greater “individualism and elitism.”

He said: “We never emerge from a crisis just as we were. We come out either better or worse. This is why, at this critical juncture, it is our duty to rethink the future of our common home and our common project.”

Francis is expected to lay out further his vision for the need for solidarity in the post-COVID world in an encyclical to be released Oct. 4.