The Latest: Brazil president fined for not wearing mask 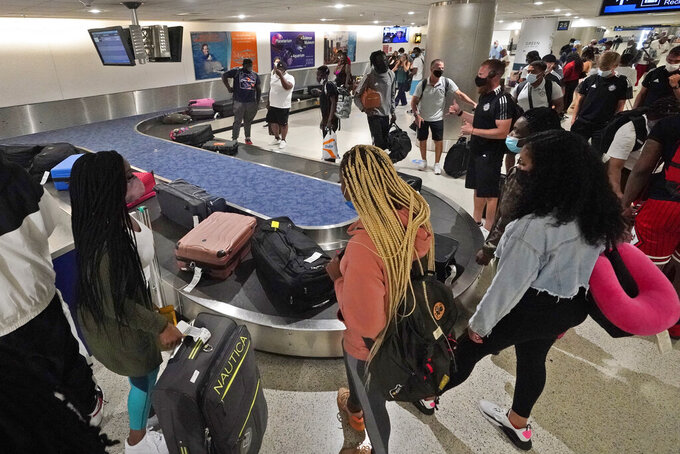 FILE - In this May 28, 2021 file photo, travelers wait for their luggage at a baggage carousel at Miami International Airport in Miami. The airline industry’s recovery from the pandemic passed a milestone as more than 2 million people streamed through U.S. airport security checkpoints on Friday for the first time since early March 2020. (AP Photo/Wilfredo Lee, File)

SAO PAULO — Brazil’s President Jair Bolsonaro led a throng of motorcyclist supporters through the streets of Sao Paulo on Saturday and got hit with a fine for failure to wear a mask.

Sao Paulo’s state government press office said a fine — equivalent to about $110 — would be imposed for violation of a rule that has required masks in public places since May 2020.

Bolsonaro’s office did not immediately respond to a request for comment. Bolsonaro, who tested positivie for the coronavirus last year, also was fined for failure to wear a mask during a rally with supporters in May in the northeastern state of Maranhao.

The conservative president waved to the crowd from his motorcycle and later spoke from atop a sound truck to helmeted but largely maskless backers. They cheered and chanted while he insisted that masks were useless for those already vaccinated — an assertion disputed by most public health experts.

Vaccines are designed chiefly to protect recipients from getting sick, not necessarily from being infected. While studies show many vaccines reduce viral load and likely spread, not all varieties have been fully studied.

Less than 12% of Brazil’s population has received both doses of a COVID-19 vaccine, according to the Ministry of Health.

— Brazil President Bolsonaro fined for no mask during motorcycle rally

— US air travel at 2 million on Friday, rebounds with more vaccinations

— Aid groups appeal to G-7 for logistical support, cash to get shots into arms to limit variants, dent global pandemic

They say rich nations must do more than donate surplus vaccines if they hope to end the COVID-19 pandemic. While almost half of the G-7′s combined population has received at least one dose of vaccine, the worldwide figure is less than 13%. In Africa, it’s just 2.2%.

U.K. Prime Minister Boris Johnson said he hoped leaders of the Group of Seven nations meeting in England will agree to provide at least 1 billion vaccine doses for poorer countries. The G-7 leaders continue to debate other forms of vaccine aid.

Wealthy nations must act quickly not only out of altruism, but to protect their own citizens, said Lily Caprani, head of COVID-19 vaccines advocacy for UNICEF. She says the virus will continue to mutate if allowed to spread unchecked, resulting in potentially more dangerous variants.

LONDON — British Prime Minister Boris Johnson has hinted the next planned relaxation of coronavirus restrictions in England will be delayed because of the spread of the delta variant first identified in India.

At the Group of Seven leaders’ summit in southwest England, Johnson conceded Saturday that he has grown more pessimistic about allowing the removal of legal limits on social contact on June 21. He is set to make an announcement Monday about the timetable.

Government figures Saturday showed 7,738 new daily cases, slightly down from the previous day’s 8,125, which was the highest one-day figure since Feb. 26.

The government has said it wants every adult to have received at least one vaccine dose by the end of July. Around 62% of the British population has one shot so far, while about 44% has two.

The U.K. has registered nearly 128,000 confirmed coronavirus-related deaths, more than any other European nation.

DALLAS — The airline industry’s recovery from the pandemic passed a milestone as more than 2 million people streamed through U.S. airport security checkpoints on Friday for the first time since early March 2020.

The Transportation Security Administration announced Saturday that 2.03 million travelers were screened at airport security checkpoints on Friday. It was the first time in 15 months that the number of security screenings has surpassed 2 million in a single day.

Airline bookings have been picking up since around February, as more Americans were vaccinated against COVID-19. In the U.S., travel restrictions, such as mandatory quarantines, have eased.

The crowds Friday were only 74% of the volume compared to the same day in 2019. However, the 2.03 million was 1.5 million more travelers than the same day last year, according to the TSA.

NEW YORK — With COVID-19 cases declining and vaccinations increasing, governors across the U.S. are wrestling with when to issue an end to the emergency declarations.

More than a half-dozen states already have ended their coronavirus emergencies. That includes South Carolina and New Hampshire, where Republican governors ended their emergency orders this past week. More states could join that list soon.

Massachusetts Gov. Charlie Baker, a Republican, says his emergency declaration will end Tuesday. The state had an indefinite state of emergency for 15 months. He credited the state’s high vaccination rate with helping turn the tide in the fight against the coronavirus.

In many states, emergency declarations have been routinely extended by governors every few weeks or months since the start of the pandemic. Republicans generally are leading the push to end emergency orders, but some Democrats also are supporting such moves.

BEIJING — Top U.S. and Chinese diplomats appear to have had another sharply worded exchange, with Beijing saying it told the U.S. to cease interfering in its internal affairs and accusing it of politicizing the search for the origin of the COVID-19 pandemic.

Senior Chinese foreign policy adviser Yang Jiechi and Secretary of State Antony Blinken held a phone call Friday that revealed wide divisions in a number of contentious areas, including the curtailing of freedoms in Hong Kong and the mass detention of Muslims in the northwestern Xinjiang region.

Yang said China was “gravely concerned” over what he called “absurd” stories that the virus escaped from a lab in the central Chinese city of Wuhan, where cases were first discovered.

The U.S. and others have accused China of failing to provide the raw data and access to sites that would allow a more thorough investigation into where the virus sprung from and how it initially spread.

DUBAI, United Arab Emirates — Saudi Arabia says this year’s hajj pilgrimage will be limited to no more than 60,000 people, all of them from within the kingdom, due to the ongoing coronavirus pandemic.

The kingdom made the announcement Saturday on its state-run Saudi Press Agency. It cited the Ministry of Hajj and Umrah for making the decision. It says this year’s hajj, which will begin in mid-July, will be limited to those ages 18 to 65. Those taking part must be vaccinated, the ministry says.

Each year, up to 2 million Muslims perform the hajj, a physically demanding and often costly pilgrimage that draws the faithful from around the world. The hajj, required of all able-bodied Muslims to perform once in their lifetime, is seen as a chance to wipe clean past sins and bring about greater humility and unity among Muslims.

The kingdom’s Al Saud ruling family in this oil-rich nation oversees and protects the hajj sites. Saudi Arabia had closed its borders for months to try and stop the spread of the coronavirus.

It has administered some 15.4 million doses of vaccines among a population of more than 30 million, according to the World Health Organization. The kingdom has reported more than 462,000 confirmed cases and 7,500 confirmed deaths.

MOSCOW — Russia’s national coronavirus taskforce reports the country’s tally of daily new infections has risen by almost half over the past week and more than doubled in Moscow.

Moscow’s mayor on Saturday ordered a week off for some workplaces and imposed restrictions on many businesses to fight the spread.

Mayor Sergei Sobyanin ordered that enterprises that do not normally work on weekends remain closed for the next week while continuing to pay employees. In addition, food courts and children’s play areas in shopping centers will close for a week and restaurants and bars must limit their late-night service to takeout.

Moscow authorities say enforcement of mask- and glove-wearing on mass transit, in stores and in other public places will be strengthened and violators could face fines of up to 5,000 rubles ($70).

ISTANBUL — Turkey is stepping up its COVID-19 vaccination program, with nearly 600,000 doses administered in the previous 24 hours.

Health minister Fahrettin Koca also tweeted Saturday that human trials for a domestic vaccine are in the final stage.

President Recep Tayyip Erdogan last month announced an intensification of vaccinations in June as the country seeks to revive its struggling economy, particularly the tourism industry.

The daily infections dropped from a high of 63,000 in mid-April to 6,261 on Friday, according to official data.

Tourism remains restricted due to a Russian ban on most flights and Britain’s requirement that travelers from Turkey pay for quarantine hotel stays and PCR tests. But Germany says it will relax quarantine requirements on July 1.

On Monday, Turkey is expected to start vaccinating people ages 40-49.

SACRAMENTO, Calif. — California Gov. Gavin Newsom has signed an executive order that will lift most of the state’s coronavirus rules.

The order Newsom signed Friday takes effect Tuesday. It will end the state’s stay-at-home order and its various amendments.

Starting Tuesday, there will be no capacity limits or physical distancing requirements for businesses. Fully vaccinated people can stop wearing masks in most places.

Newsom said he will not end the statewide declaration of emergency. That ensures the governor has the power to alter or suspend state laws in the future. That has angered Republican lawmakers who say the declaration is unnecessary.

HONOLULU — Honolulu is loosening some restrictions on social activity now that more than half its population has been vaccinated against COVID-19.

Karaoke bars and nightclubs may operate at 50% capacity if all attendees are tested for the disease or show proof they have been fully vaccinated.

The city will allow gatherings of 25 indoors and 75 outdoors once 60% of the population has been vaccinated. All limits will be lifted when the vaccination rate tops 70%.

Honolulu reported 25 new cases of COVID-19 on Thursday, down 25% from two weeks earlier.

CHICAGO — Officials declared Chicago fully reopened on Friday, ending a requirement that people wear face masks in most indoor places and lifting capacity limits intended to slow the spread of the coronavirus.

Chicago sometimes veered from the state’s restrictions and opted to be stricter or more lenient than the state required. But city officials decided to join the rest of Illinois in lifting restrictions Friday, nearly 15 months after Gov. J.B. Pritzker issued the first stay-at-home order as coronavirus cases began to rise.

People who aren’t vaccinated must still wear a mask indoors, and everyone will still need to wear masks inside health care facilities, jails, shelters, schools, taxis, ride-hailing vehicles and on public transportation. Businesses can still opt to require people to wear masks on their premises.

FALMOUTH, England — U.N. Secretary General Antonio Guterres welcomes commitments by the U.S. and Britain to share millions of coronavirus vaccine shots with struggling countries. But he says it’s not enough.

Without a global effort, Guterres says the coronavirus could “spread like wildfire” in much of the developing world.

Leaders from the Group of Seven wealthy democracies are expected to commit to share at least 1 billion vaccine shots with poorer countries, with half the doses coming from the U.S. and 100 million from the U.K.

Guterres says to defeat the virus, countries producing vaccines need to form an emergency task force to coordinate an effective response to COVID-19.

“We need a concerted effort, we need a global vaccination plan,” says Guterres, who will join the summit. “If not, the risk is there will still be large areas of the developing world where the virus spreads like wildfire.”