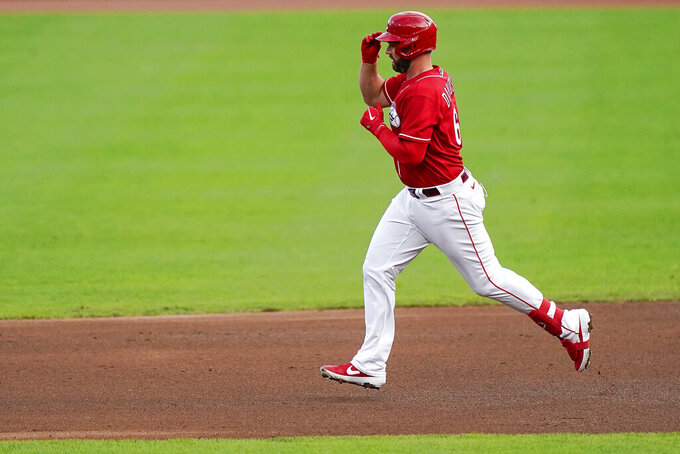 Cincinnati Reds infielder Matt Davidson touches his cap as he runs the bases after hitting a home run in the fourth inning of the exhibition baseball game against the Detroit Tigers at Great American Ballpark in Cincinnati, Wednesday, July 22, 2020. (AP Photo/Bryan Woolston)

Milwaukee Bucks reserve guard Pat Connaughton flew to Florida on Saturday after a positive coronavirus test had kept him from joining his teammates at Walt Disney World two weeks earlier.

The Bucks tweeted out a video of Connaughton sitting in an airplane and saying, “heading to Orlando to meet up with my teammates.”

Connaughton and starting point guard Eric Bledsoe hadn’t been part of the Bucks’ original traveling party to Disney World because both had tested positive, though both players have said they were asymptomatic.

Bledsoe arrived in Florida on Wednesday and practiced with his teammates Friday.

The Rutgers football team announced six additional positive tests for COVID-19 on Saturday. Since returning to campus on June 15 the program has had 10 total positive tests.

The school said that it has paused all in-person team activities and quarantined the entire football program and will work with medical experts to determine the next steps.

Cincinnati Reds infielder Matt Davidson tested positive for COVID-19 and went on the 10-day injured list one day after he started the opener as a DH.

Davidson popped out and grounded into a double play during the Reds' 7-1 win over the Detroit Tigers at Great American Ball Park on Friday night. He left for a pinch-hitter.

The Reds signed the 29-year-old to a minor league deal earlier this year. He also played for the Diamondbacks and White Sox. Davidson hit three homers in Chicago's season opener in 2018.

Brach confirmed he and his pregnant wife both had COVID-19 and experienced mild symptoms, including loss of taste.

Jenae Brach gave birth to healthy twin boys, Carson and Brody, on July 17. Brad Brach helped the family settle into their Tennessee home before reporting to the Mets on Saturday.

The 34-year-old right-hander had a 3.68 ERA in 16 games with New York last year after being released by the Chicago Cubs midseason. The Mets had not disclosed Brach’s positive test prior to Saturday. It’s unclear when Brach will be added to the active roster.

Another New York reliever, Jared Hughes, also recently returned to the club after missing the start of summer camp for undisclosed reasons.

Milwaukee Brewers shortstop Luis Urias has been cleared to return to baseball activity after testing positive for coronavirus before the start of Major League Baseball’s preseason summer camp.

The Brewers are sending Urias to their secondary facility in Appleton, Wisconsin. The Brewers have said Urias remained asymptomatic while going through the MLB protocols on returning to action.

“It’s just a matter of really just getting into baseball shape, getting live at bats and going at a good pace,” Brewers manager Craig Counsell said. “The other guys all got three weeks. I think he can be at a place where he’s maybe a little bit quicker, but it’s going to take some time.”

The Brewers have said Urias remained asymptomatic while going through the MLB protocols.