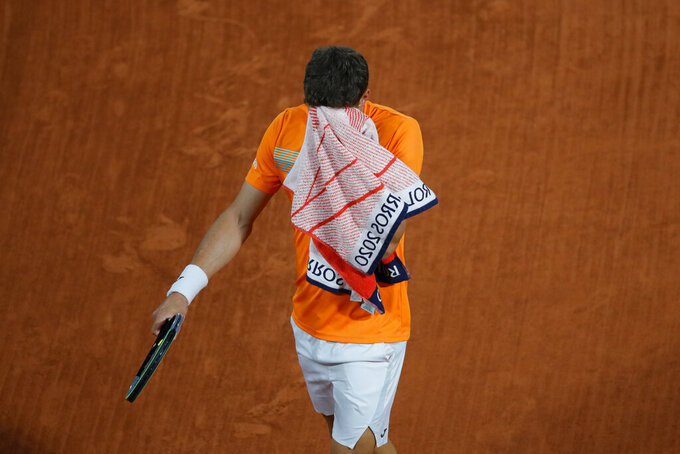 Pablo Carreño Busta said he had a bit of a stomach problem and that is why he was visited by a doctor during his fourth-round victory at the French Open.

Carreño Busta downplayed the issue after beating Daniel Altmaier on Monday night, saying: “Sometimes you have to win these kind of matches when you are not 100%.”

Carreño Busta's three-set win put him into the quarterfinals at Roland Garros for the second time.

He will face No. 1 seed Novak Djokovic on Wednesday in a rematch of their fourth-round meeting at the U.S. Open last month. Djokovic was defaulted from that match for accidentally hitting a line judge with a ball after losing a game in the first set.

No. 17 seed Pablo Carreño Busta set up a rematch against Novak Djokovic by reaching the second French Open quarterfinal of his career.

Carreño Busta was visited by a doctor after the second set but continued to play well and beat 186th-ranked qualifier Daniel Altmaier 6-2, 7-5, 6-2 at Court Philippe Chatrier.

It wasn't immediately clear what was wrong with Carreño Busta.

At the U.S. Open last month, Carreño Busta was the opponent who advanced when Djokovic was defaulted from their fourth-round match for accidentally hitting a line judge with a ball after a game in the first set.

Carreño Busta, a 29-year-old from Spain, would go on to reach the semifinals in New York before blowing a two-set lead against eventual runner-up Alexander Zverev.

Carreño Busta also was a quarterfinalist in Paris in 2017.

The 22-year-old Altmaier was trying to become the first man since 1996 to get to the quarterfinals of his first Grand Slam tournament. He hadn’t dropped a set until Monday.

Australian Open champion Sofia Kenin turned things around at the French Open after a poor opening set to reach the quarterfinals at Roland Garros for the first time.

The No. 4-seeded Kenin beat the 49th-ranked Fiona Ferro 2-6, 6-2, 6-1 at Court Philippe Chatrier. Ferro was the last French man or woman still around in singles.

Chair umpire Marijana Veljovic warned Kenin's father, Alexander, for coaching, which is not allowed during Grand Slam matches. Alexander Kenin had changed seats during the match to be right next to Ferro's coach, Emmanuel Planque, who was closer to the court.

Kenin upset Serena Williams at last year's French Open en route to making it to the fourth round. But until now, the 21-year-old American had never been to the quarterfinals at any clay-court tournament.

She won her first Grand Slam title at Melbourne Park at the start of this season and now is 14-1 at major tournaments in 2020.

Kenin won't find out who her next opponent is until Tuesday. That's because the fourth-round match between another American, Danielle Collins, and 30th-seeded Ons Jabeur of Tunisia was rained out Monday and delayed a day.

Novak Djokovic reached the French Open quarterfinals for the 11th consecutive year, extending his own Open-era record at the tournament.

The top-seeded Djokovic faced his toughest challenge yet this year at Roland Garros but still won rather easily against No. 15 seed Karen Khachanov 6-4, 6-3, 6-3 at Court Philippe Chatrier, taking the last four games.

The stadium’s new $55 million retractable roof was shut because of a heavy downpour.

Djokovic has won all 12 sets he’s played in Paris this year and dropped a total of only 25 games so far. He lost five games in each of his first three matches.

This victory puts Djokovic in his 47th Grand Slam quarterfinal, second only to Roger Federer’s 57.

Djokovic is seeking a second French Open championship and 18th major trophy overall. Among men, only Federer, with 20, and Rafael Nadal, with 19, have more.

Djokovic will face No. 17 seed Pablo Carreño Busta or qualifier Daniel Altmaier next. The rain prevented their fourth-round match from starting when it was supposed to at open-air Court Suzanne Lenglen.

The 13th-seeded Russian saved three set points serving at 5-4 down and 0-40 in the fourth set.

He won on his second match point when the unseeded Fucsovics put a forehand into the net after Rublev had hit a volley at the net.

The two-time U.S. Open quarterfinalist Rublev had never been beyond the first round at Roland Garros.

He next faces fifth-seeded Stefanos Tsitsipas.

The seventh-seeded Czech player lost her only semifinal match at Roland Garros in 2012.

Zhang had a medical timeout while trailing 5-2 in the first set.

Kvitova sat waiting wrapped in a pink coat to combat the chilly conditions on Court Philippe Chatrier. She then did some leg exercises to keep warm.

The 30-year-old Kvitova will next face Laura Siegemund. The unseeded German beat Paula Badosa 7-5, 6-2 to reach the quarterfinals at a major tournament for the first time.

There will still be crowds for the final week of French Open after Paris police decided not to reduce the limit of 1,000 spectators per day.

But he maintained the current limit of 1,000 spectators at sports events in Paris and specifically noted the clay-court tournament at Roland Garros.

The decision will come as a relief to players.

Many have said how much they appreciate having spectators even in much smaller numbers than normal.