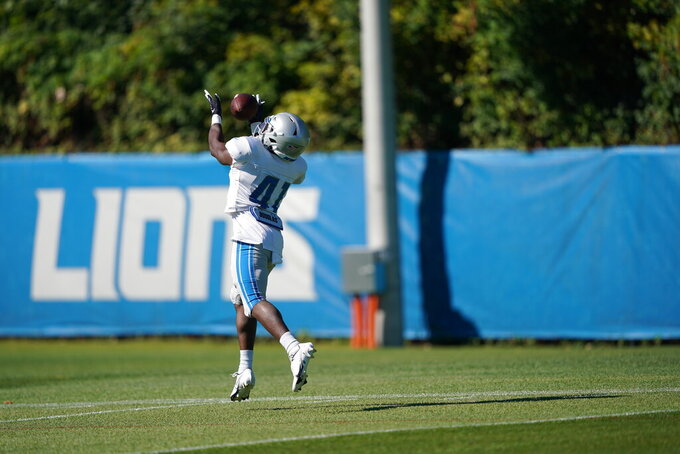 The Chicago Fire say one of their players has tested positive for COVID-19.

The Major League Soccer team says the player is asymptomatic and isolated “under a strict and detailed protocol.” The rest of the players on the team have registered consecutive negative test results.

The Fire lost 3-0 at Columbus on Thursday night, but the team says the player who tested positive wasn’t on the trip.

The Fire have started daily testing of their first team and staff as a result of the positive test. They also have implemented contact tracing.

Their next game is against Cincinnati on Tuesday at Soldier Field.

The Arizona Coyotes have laid off and furloughed staff due to financial issues caused by the coronavirus.

The NHL team did not specify how many staff members nor which departments were affected.

“These are incredibly challenging times for everyone and we’ve had to make some extremely difficult decisions,” the team said in a statement. “Today, we reduced our operations to help us deal with this unprecedented health and financial situation. We care deeply about all our team members and understand the impact this will have on them and their families.”

The team furloughed about half its business staff in April, but did pay its hourly and part-time employees for the final home games wiped out by the league-wide shutdown.

Nebraska is putting 51 athletic department employees on furlough and all others will take a 10% pay cut in response to the budget crisis caused by the coronavirus pandemic.

The furloughs and pay cuts will be in effect from Sept. 1 through Dec. 31.

“The postponement of the fall sports season, and specifically the football season, has put us in the position of making some very difficult decisions that impact every member of our staff,” athletic director Bill Moos said. “In my three decades as an athletic director, I have always said that people are our most valuable resource and there is no question that is true here at Nebraska. These are outstanding staff members and great people, and that is what makes this a particularly tough day.”

The measures are in addition to department cuts announced in June that included a 10% reduction in overall expenses for the 2021 fiscal year, no merit raises and the elimination of 17 jobs. In total, staffing decisions are expected to result in a savings of about $3 million.

Appalachian State’s football team is returning to practice Friday after pausing workouts because of a coronavirus cluster.

In a statement, athletics director Doug Gillin said the team will return to work in small groups or “pods.” The program is also implementing “more stringent capacity limits” on shared facilities such as the locker room or weight room.

The school said Tuesday night there have been active cases for seven students and four staffers associated with the team. Gillin’s statement Friday said the team went through scheduled testing on Wednesday before the school cleared the way for a return to workouts.

Iowa will drop four sports programs at the end of the 2020-21 academic year in response to the financial hardships caused by the coronavirus pandemic.

The athletic department deficit is projected at $60 million to $75 million this year.

The four sports programs will compete in 2020-21 if circumstances surrounding COVID-19 permit. Existing scholarships will be honored through graduation for athletes who remain at Iowa. The contracts of affected coaches will be honored.

Among factors considered for which sports to cut were number of schools sponsoring teams at the Division I level; impact on gender equity and Title IX compliance; expense savings; history of the sport at Iowa; and engagement level.

Iowa is the second school from a Power Five conference to drop sports programs. Stanford announced last month it would cut 11 sports.

Nearly 200 sports programs across three NCAA divisions and the NAIA have been eliminated since the coronavirus pandemic began in the United States in March.

The Southeastern Conference has modified its previously announced requirements for COVID-19 testing.

The league has outlined specific cardiac evaluation requirements from its initial report and will have a third, rapid test close to competition for sports with a high risk of close contact.

The SEC’s Return to Activity and Medical Guidance Task Force has now specified the cardiac evaluation would mandate a troponin level, electrocardiogram, echocardiogram and a medical evaluation by a physician.

McDonald says ULM hopes to resume practice by early next week as soon as ongoing testing indicates it is safe to do so.

“We fully anticipated an increased exposure to COVID-19 with the reopening of campus, the beginning of the fall semester as well as uptick in related off-campus activities,” McDonald said. “We also knew that we would have to work to create a modified student-athlete bubble once classes and on-campus activities resumed this month.

“We’ll await the latest round of test results while continuing to monitor our quarantined and isolated student-athletes.”

ULM officials say the school has administered 1,404 virus and antibody tests combined to athletes and staff across all sports since mid-June. So far, 34 total tests have been positive. The Warhawks football team is slated to open its season Sept. 5 at Troy.

“We’re fully aware that we’re managing a fluid situation,” ULM coach Matt Viator said. “While disappointed, we realized that the suspension of practice was a real possibility sometime this preseason. ... Our team remains optimistic that we’ll be able to safely compete this fall.”

The Detroit Lions say they will not have fans at their first two home because of the COVID-19 pandemic.

The team also announced Friday that parking lots near the stadium and businesses within the indoor facility will be closed when Detroit hosts the Chicago Bears on Sept. 13 and the New Orleans Saints on Oct. 4.

The Lions may allow spectators to watch their game at Ford Field on Nov. 1 against the Indianapolis Colts.

There will be no fans for the Denver Broncos’ season opener against the Tennessee Titans on Monday night Sept. 14 because of the COVID-19 crisis.

The Broncos said Friday they hope to have fans at subsequent games. The team has sold out every home game since the 1960s.

The Broncos have been working with the Colorado governor’s office, using computer-generated plans that include up to 20,000 fans at Empower Field at Mile High.

But the team said having an empty stadium for the opener was the "responsible thing to do right now for our community.”

The private Southeastern Conference university is not sharing the number of positive results. But Vanderbilt issued a statement noting the university’s ongoing testing procedures has “positive COVID-19 test results.”

Vanderbilt says it is working closely with its Public Health Command Center and other health officials assessing potential close contacts and advising on additional steps. But Vanderbilt cites federal student privacy law in not disclosing information that could identify any student who has tested positive.

French league clubs Monaco and Lens both say one of their players has tested positive for the coronavirus.

Monaco did not name the player but says he is recovering and that the club has informed league officials.

Monaco is scheduled to play at home against Reims on Sunday in the opening weekend of the season.

Lens defender Jonathan Clauss has also tested positive for the virus. Lens coach Franck Haise says Clauss is showing no symptoms and is in isolation from the rest of the squad.

Newly-promoted Lens is also in action on Sunday. The club will travel south to play Nice.

The World of Outlaws is “ramping up” its COVID-19 protocols following an outbreak after last weekend’s event at Knoxville, Iowa.

Series officials urged anyone at the track who had come into contact with those infected to get tested. Several other participants and family members tested positive following that notification.

Fans were allowed at the races last weekend and also took part in autograph sessions. WoO says it will be reverting to the initial protocols in place when the series resumed racing earlier in the pandemic. Among the tightened restrictions will be closing the pit area to fans until further notice.

The World of Outlaws says all affected parties must quarantine until medically cleared to return to the track. Drivers racing for season-long points now unable to race because of the positive test will receive points based on their average finish for the season until they are able to return.