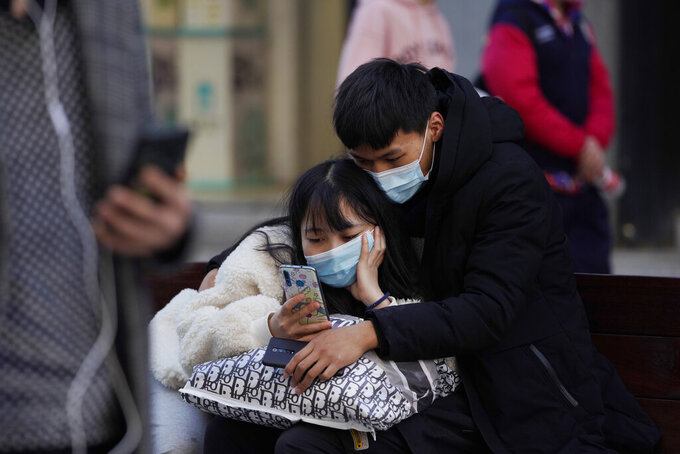 A man and woman wearing masks to help protect themselves from the coronavirus share a smartphone on the street in Wuhan in central China's Hubei province on Thursday, Jan. 14, 2021. A global team of researchers for the World Health Organization arrived Thursday in the Chinese city where the coronavirus pandemic was first detected to conduct a politically sensitive investigation into its origins amid uncertainty about whether Beijing might try to prevent embarrassing discoveries. (AP Photo/Ng Han Guan)

BEIJING — China says it is now treating more than 1,000 people for COVID-19 as numbers of cases continue to surge in the country’s north.

The National Health Commission said Friday that 1,001 patients are under care for the disease, 26 of them in serious condition. It says 144 total new cases were recorded in the previous 24 hours.

The province of Hebei, just outside Beijing, accounted for 90 of the new cases, while Heilongjiang province farther north reported 43 new cases.

While there have been no reports of hospital bed shortages, Hebei has begun constructing a new quarantine center outside the provincial capital of Shijiazhuang in case it is needed.

Shijiazhuang and the cities of Xingtai and Langfang are under virtual lockdown, confining more than 20 million people to their homes.

WILMINGTON, Del. — President-elect Joe Biden says he knows his $1.9 trillion coronavirus plan “does not come cheaply” but he says America can’t afford to fail to pass the plan.

Biden said Thursday night that by investing now “boldly, smartly and with unwavering focus on American workers and families,” the plan will strengthen the economy, address inequity and set America on a more sustainable financial course.

Biden’s plan faces an uncertain future. Democrats have narrow margins in both chambers of Congress and the legislation would be paid for with borrowed money, adding to trillions in debt the government has already incurred to fight the pandemic.

WILMINGTON, Del. — President-elect Joe Biden is calling the Trump administration’s rollout of coronavirus vaccines a “dismal failure” and says he will unveil his own plans on Friday to speed up inoculations.

In unveiling a $1.9 trillion plan for dealing with the pandemic, Biden said Thursday night that “this will be on the most challenging operational efforts we have ever undertaken as a nation.”

He says that “we will have to move heaven and earth to get more people vaccinated.”

The Trump administration announced earlier this week that it will release all available vaccine doses. It said it will direct states to immediately begin vaccinating every American 65 and older as well as tens of millions of adults with health conditions that put them at higher risk of dying from the virus.

WILMINGTON, Del. —President-elect Joe Biden says his priority is effectively combatting the twin crises of a pandemic and the sinking economy.

Biden said during a speech Thursday night that “we have to act now” to help the “millions of Americans, through no fault of their own,” who have lost “the dignity and respect that comes with a job and a paycheck.”

He discussed the framework of his $1.9 trillion “American Rescue Plan,” which includes $1,400 checks for most Americans and would extend a temporary boost in unemployment benefits and a moratorium on evictions and foreclosures through September.

The proposal also includes plans to speed up the vaccine rollout and provide financial help to individuals, states and local governments and businesses struggling with the prolonged economic fallout.

JACKSON, Miss. — The U.S. surgeon general has urged Black leaders in Mississippi to get vaccinations for the new coronavirus and to ask others in their communities to do the same.

Dr. Jerome Adams spoke Thursday during an online forum hosted by Jackson State University. He said people distrust medical systems because of the government study that left Black men untreated for syphilis for decades, starting in the 1930s.

Adams, who is Black, says that “we have to acknowledge and validate those real historical reasons for concern, because when you tell people they’re silly to have those concerns, they immediately shut down.”

The Mississippi state health officer says that only 15% of vaccinations in the state so far have gone to Blacks, who make up about 38% of the population. He says it is a challenge that "we are working to address.”

NEW YORK — A false rumor that extra vaccine doses were available had people lining the sidewalks and cars filling the roadways near a New York City coronavirus vaccine site.

Messages spread online claimed several hundred doses had to be given out at the Brooklyn Army Terminal by Thursday evening and that any adult was welcome whether they had an appointment or not. The resulting chaos brought out police and city workers to tell people that it wasn’t true and vaccinations are appointment-only.

There is high demand for the vaccine, which in New York state is currently available only to people 65 and over, health care workers and those in certain key professions such as police officers and teachers.

LONDON — The United Kingdom is banning arrivals from South America following evidence of a new variant of the coronavirus in Brazil.

The government says that beginning at 4 a.m. Friday, arrivals will no longer be allowed from all South American countries as well as the Cape Verde islands off the west coast of Africa and Panama in Central America.

Travel from Portugal also will be suspended, given its strong travel links with Brazil, though there are exemptions for truck drivers transporting essential goods.

The ban does not apply to British and Irish nationals and third country nationals with residence rights in the U.K. However, anyone returning from the banned destinations must quarantine themselves for 10 days with their households.

Many countries have banned travel from the U.K. over the past few weeks after the discovery of another variant of the virus around London and southeast England.

RENO, Nev. — A study in Nevada says about one-third of the state's residents are unlikely to get vaccinated for the new coronavirus.

About 35% of the 5,000 Nevada residents who responded to the survey by the state and the University of Nevada, Reno stated they were not at all or not too likely to get vaccinated.

But one of the lead researchers in the study says people’s explanations of their reasoning suggests it is possible to persuade many to change their minds. Dr. Mark Riddle says safety and efficacy were the most important factors people cited. He thinks experts can make a case that the vaccine is safe and effective.

ANAHEIM, Calif. -- Disneyland is ending its annual pass program 10 months after the theme park in Anaheim, California, shut down due to the coronavirus pandemic.

The park said Thursday it will begin issuing “appropriate” refunds to eligible passholders. It is not immediately clear how many people hold these passes.

The announcement comes the same week that Disneyland allowed county health officials to use its parking lot as a large-scale coronavirus vaccination site.

Disneyland closed in March and has not reopened since because virus transmission in the area where the park sits has not declined to the levels required by the state.

He plans to formally introduce the proposal, dubbed the “American Rescue Plan,” on Thursday evening from Wilmington, Delaware.

Ahead of that announcement, Biden officials said the economic aid would help sustain Americans through the vaccination process, but it would also provide a possible springboard for a stronger recovery once the pandemic wanes. More than $400 billion would go toward vaccinations, testing, public health jobs, reopening schools and family leave benefits, creating the infrastructure to achieve 100 million vaccinations in 100 days and even more going forward.

Eligible Americans would receive an additional $1,400 in direct payments. Unemployment insurance would pay an additional $400 weekly through September. The plan would also extend the eviction and foreclosure moratorium through September. It would expand tax credits for children and child care, in addition to providing aid for child care providers. The federal minimum wage would grow to $15 an hour, up from $7.25 currently.

The plan would offer $20 billion in aid to public transit agencies, as well as grants and loans to small businesses.

The Republican governor called it the “biggest vaccination effort we have ever undertaken,” but refused to order new lockdowns even amid rising numbers of new cases and hospitalizations.

State health officials say Texas had more than 14,000 COVID-19 patients in hospitals and its death toll has passed 30,000.

HELENA, Mont. — Republican leaders in Montana’s Legislature are refusing to require lawmakers to wear masks while meeting with legislative staffers in their offices to discuss bill drafts or other issues.

The Legislature’s COVID-19 response panel met Thursday to further discuss rules to mitigate the spread of COVID-19 at the state Capitol.

The panel chair is Senate President Pro Tem Jason Ellsworth and he called the motion “wordsmithing.” It was rejected on a 6-2 party line vote.

The South Carolina Department of Health and Environmental Control says the temporary rule change is to make sure the state has enough people trained to administer the shots once the vaccine becomes more widely available.

Health officials say the state is currently receiving about 64,000 doses weekly from the federal government. The limited number of available doses has frustrated South Carolinians as the state opened up vaccine access to those 70 and older this week, leading to a rush for shots. Some hospitals ran out of vaccine spots for seniors just hours after they opened up appointments.

South Carolina has 924 sites currently enrolled in the federal program to administer the vaccine. The health department said there are 286 currently activated.

PARIS — All of France will be under a stricter curfew starting Saturday at 6 p.m. for at least 15 days to fight spread of the coronavirus.

French Prime Minister Jean Castex also announced strict new controls for those arriving in France from countries outside the European Union. Starting Monday, they must produce a PCR test with negative results and self-isolate for seven days followed by a new, negative test.

France wants to coordinate a response with the European Union about arrivals from EU countries, he says. The French government is trying to avoid a third lockdown with partial measures like curfews the prime minister calls both “preventative” and “reactive.”

Most regions were under an 8 p.m. curfew, but now “everyone must be home at 6 p.m.,” Castex says. That means that stores must close by then. Bars and restaurants have been closed for months.

The average contamination rate for the coronavirus stands at about 16,000 people per day. France has one of the highest death counts in Europe, at more than 69,000, and ranks No. 7 in the world.

That increases the totals to 2.2 million cases and more than 53,000 since the start of the pandemic.