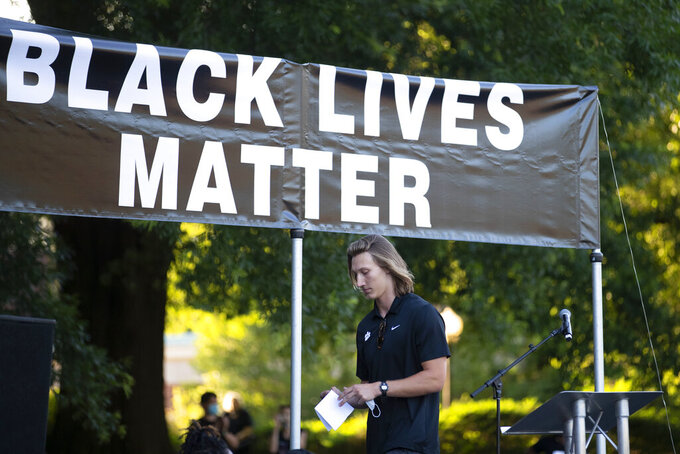 Clemson quarterback Trevor Lawrence steps away from the microphone after speaking Saturday, June 13, 2020, in Clemson, S.C., during a protest rally over the death of George Floyd who died after being restrained by Minneapolis police officers on May 25. (AP Photo/John Bazemore)

— Bust of slave owner torn down, thrown in river in New Orleans.

CLEMSON, S.C. -- Members of the Clemson University football team led hundreds of demonstrators on the school’s campus Saturday as they marched for equality and against police brutality.

The demonstration included a moment of silence for 8 minutes and 46 seconds, the length of time prosecutors say George Floyd, a 46-year-old black man, was pinned to the ground with his neck under a white Minneapolis police officer’s knee before he died last month.

“This is a historic time, and a challenging time,” head football coach Dabo Swinney told the crowd. “But as I tell my team all the time, challenge is what creates change. … Black lives more than matter — black lives significantly matter and equally matter. For far too long that has not been the case for the black community.”

The march came a day after Clemson trustees voted to rename its honors college, stripping from the program the name of former vice president and slavery proponent John C. Calhoun.

Calhoun, who was born in South Carolina, declared slavery a “positive good” on the U.S. Senate floor in 1837.

Before the administrators’ vote, an online petition by students calling for the name to be changed drew more than 20,000 signatures. Clemson football alumni and one-time Houston Texans teammates DeAndre Hopkins and Deshaun Watson voiced support for the petition on social media.

NEW ORLEANS -- Protesters tore down a bust of a slave owner who left part of his fortune to New Orleans’ schools, and then they took the remains to the Mississippi River and rolled it down the banks into the water.

The destruction Saturday is part of a nationwide effort to remove monuments to the Confederacy or with links to slavery as the country grapples with widespread protests against police brutality toward African Americans.

Police said in a statement Saturday that demonstrators at Duncan Plaza, which is directly across the street from City Hall, dragged the bust into the streets, loaded it onto trucks and took it to the Mississippi River where they threw it in. Two people who were driving the trucks transporting the bust were apprehended by police and taken to police headquarters, authorities said. Their names were not given in the statement.

The police did not identify the bust, but local media identified it as one depicting John McDonogh. When he died, McDonogh left a large portion of his money to New Orleans and Baltimore for schools, and many schools in New Orleans are named after him.

Video on social media showed dozens surrounding the bust, which sat on a pedestal while some people pulled on a rope tied to the bust and another hit it. As the bust tilts and then crashes to the ground the crowd cheers. Another video posted on social media shows a crowd watching as the bust is rolled down the rocky banks of the Mississippi River and into the water.

Mayor LaToya Cantrell said in a tweet that the city “rejects vandalism and destruction of City property. It is unlawful.”

RICHMOND, Va. — Thousands gathered in Virginia's capital on Saturday for a demonstration against racism known as the “5,000 Man March.”

The protest in Richmond included a speech by a cousin of George Floyd, the black man whose death at the hands of police has prompted weeks of protests around the world.

The demonstrators gathered at the city’s famed monument of Confederate Gen. Robert E. Lee before making a loop around the downtown. They returned to the monument about two hours later to hear speakers, including a relative of Floyd, the man who died last month after a Minneapolis police officer kneeled on his neck for several minutes as he pleaded for air.

Tavares Floyd, George Floyd’s cousin, stepped onto the Lee monument and was welcomed by applause from the surrounding crowd of demonstrators in the former capital of the Confederacy.

WRIC-TV reports that Floyd spoke about many different racial inequalities that the black community faces in Virginia and throughout the nation.

PALMDALE, Calif. — Authorities in the Southern California city of Palmdale are investigating the death of a 24-year-old black man found hanging from a tree, which they originally described as an apparent suicide, prompting outrage in the community.

More than 100,000 people signed an online petition demanding a full investigation and community members confronted city officials on Friday. Los Angeles County coroner’s officials said a decision on the cause of Robert Fuller's death is deferred pending an investigation.

Fuller’s death has brought to light the death of another black man found hanging from a tree on May 31 in Victorville, a desert city 45 miles (72 kilometers) east of Palmdale. A sheriff’s spokeswoman, Jodi Miller, told Victor Valley News foul play was not suspected in Malcolm Harsch’s death, but the man’s family said they were concerned it will be ruled a suicide to avoid further attention.

In a country that sees thousands of protests annually, the decision by the Council of State allows for the resumption of demonstrations and marches as long as health protections are respected, and events are declared in advance to local authorities and not deemed a risk to public order.

The Council ruled that “the ban on protesting is not justified by the current health situation.” It said the right to protest is a “fundamental freedom.”

The ruling came just as an unauthorized protest against police violence and racial injustice wound down in Paris. Police had stopped the at least 15,000 protesters from a planned march through the city Saturday, citing the virus-related restrictions on any gathering of more than 10 people. France has seen several unauthorized protests in the wake of George Floyd’s death in the U.S.

The tear gas began just as a group of extreme-right counter demonstrators were dislodged from the roof of a building overlooking the protest.

Protesters set off firecrackers and shouted at police but were otherwise peaceful. Families and others trying to leave the protest struggled to get out because police had blocked off most exit routes. The remaining crowd took a knee.

Police decided to bar the crowd from marching from the Place de la Republique in eastern Paris toward the city’s main opera house. A police official told The Associated Press the decision was made because of a nationwide ban on gatherings of more than 10 people to prevent the spread of the coronavirus.

The counter demonstrators had earlier unfurled a banner about “anti-white racism” and lit flares in the blue-white-red colors of the French flag.

Residents reached out their windows to tear down the banner. Activists later confronted the far-right activists on the roof, throwing their bags and ropes to the pavement below.

PRAGUE — Hundreds rallied in Prague for the second straight Saturday in support of the protests in the United States against police violence and racism.

In a noisy but peaceful rally amid occasional showers, the protesters were marching through the Little Quarter district of the Czech capital, chanting “Black Lives Matter,” “No Justice No Peace” and “No Trump, No KKK, No fascist U.S.A.”

Many protesters condemned all forms of racism in the U.S., the Czech Republic and elsewhere.

They displayed banners that read “Together Against Racism,” “Stop Police Violence” and “All Lives Don’t Matter Until Black Lives Matter.”

The rally was organized by an informal group of Americans living in Prague, along with several Czech groups. At the end, they observed a minute of silence in front of the U.S. Embassy.

Shouts rose from the largely black crowd as a group of white extreme-right activists climbed a building and unfurled a huge banner denouncing “anti-white racism.” Others tried to tear it down.

Police surrounded the area, bracing for potential violence. There’s been scattered clashes at largely peaceful demonstrations around France, inspired by Black Lives Matter and global protests in the wake of George Floyd’s death.

The march in Paris was led by supporters of Adama Traore, a 24-year-old French black man who died in 2016. Traore didn’t have his identity card on him and reportedly ran as the police approached.

A huge portrait showed a face of half Traore, half Floyd. Traore’s sister Assa told the crowd, “We are all demanding the same thing -- fair justice for everyone.” She says her brother was also handcuffed and held down by police before he died.

PARIS — Police have ordered the closure of newly reopened restaurants and shops along the route of a march in Paris against police brutality and racism, fearing possible violence.

The march between the Place de la Republique in eastern Paris and the city’s main opera house is expected to be the biggest of several demonstrations Saturday inspired by the Black Lives Matter movement in the U.S.

The Paris police chief ordered merchants and city officials to clear sidewalks along the route of anything that could be set on fire or used by troublemakers against police. Any gatherings of more than 10 people remain banned in France because of virus containment measures.

The Paris march was organized by supporters of Adama Traore, a French black man who died in police custody in 2016 in circumstances that remain unclear despite four years of back-and-forth autopsies. They’re demanding “justice for Adama and all victims of police.”

France has seen several similar demonstrations in the wake of George Floyd’s death in the U.S. They’ve been overwhelmingly peaceful, though some have seen scattered clashes between police and protesters.

Protests are also expected Saturday in Marseille, Lyon and other French cities.

LONDON — British police have imposed strict restrictions on groups planning to protest in London Saturday in a bid to avoid violent clashes.

Protesters from the Black Lives Matter movement, as well as far-right groups, have said they plan to gather for demonstrations in central London.

Mayor Sadiq Khan warned that statues in the capital — in particular a statue of Winston Churchill in Parliament Square — could become flash points for violence. He said officials have intelligence that extreme far-right activists want to gather in London “ostensibly, they say, to protect the statues.”

Commander Bas Javid urged people not to gather in large groups at all because of the coronavirus. But if they must, he said activists have to stick to the planned route and be off the streets by 5 p.m.

He said that while protesters last weekend were largely peaceful, a minority was “intent on disorder” that resulted in assaults on police and violent behavior.

Dozens were arrested last weekend and a police horse was pictured bolting past the crowds amid the chaos.