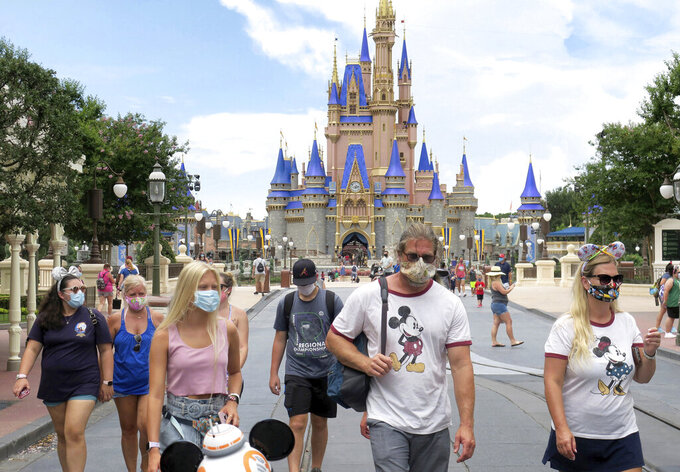 FILE - In this Saturday, July 11, 2020, file photo, guests wear masks as required to attend the official reopening day of the Magic Kingdom at Walt Disney World in Lake Buena Vista, Fla. Two weeks after reopening, workers at Disney World are praising the company for the safety protocols that have been implemented to protect against the new coronavirus. But questions remain about whether it will matter to paying guests of Disney World and its crosstown rivals, Universal Orlando and SeaWorld Orlando. (Joe Burbank/Orlando Sentinel via AP, File)

HARTFORD, Conn. -- Connecticut’s third reopening phase is set to begin Thursday, a milestone during the coronavirus pandemic that is getting a lukewarm reception from some business owners and arts aficionados.

A number of restaurant owners say they won’t be able to reach the new 75% capacity limit for indoor dining because they don’t have the space, primarily due to the requirement that tables be at least 6 feet apart. The indoor capacity maximum is being increased from 50%.

Indoor performing arts venues will be allowed to open beginning Thursday at 50% capacity, while outdoor event venues will be allowed to increase their capacity from 25% to 50%, with required masks and social distancing at all locations. But many theaters and concert venues have decided not to open this week, as shows already have been canceled and many say they can’t make money with half-full facilities.

The Phase 3 reopening comes as Connecticut has seen a slight uptick in coronavirus cases. Nearly 140 people were hospitalized as of Wednesday, up from 50 from a month ago and the highest number since late June.

The positive test rate for the virus was less than 1% over most of the summer, but has edged up to around 1.5% recently.

— What do we know about superspreader events in the pandemic?

— Eli Lilly and Company has asked the U.S. government to allow emergency use of an experimental antibody therapy.

— Tennessee will not be returning to the team’s facility after two more players tested positive and New England Patriots have canceled practice through Thursday amid reports that a third player has tested positive for the coronavirus.

ORLANDO, Fla. — About 8,800 part-time union workers at Walt Disney World in Florida will be part of the 28,000 layoffs in Disney’s parks division in California and Florida, union officials said Wednesday.

The addition of the union workers to the almost 6,500 nonunion layoff already announced brings the Disney-related job losses in Florida to more than 15,000 workers.

Disney officials announced last week that it was laying off 28,000 workers because of the coronavirus pandemic. Two-thirds of the planned layoffs involved part-time workers and they ranged from salaried employees to hourly workers.

Disney’s parks closed last spring as the pandemic began spreading in the U.S. The Florida parks reopened this summer, but the California parks have yet to reopen as the company awaits guidance from the state of California.

In a letter to employees, Josh D’Amaro, chairman of Disney Parks, Experience and Product, said California’s “unwillingness to lift restrictions that would allow Disneyland to reopen” exacerbated the situation for the company.

Disney has soared to success with the breadth of its media and entertainment offerings, but is now trying to recover after the coronavirus pandemic pummeled many of its businesses. It was hit by several months of its parks and stores being closed, cruise ships idled, movie releases postponed and a halt in film and video production.

LAS VEGAS — Nevada Gov. Steve Sisolak has tested negative for coronavirus in Las Vegas a day after a positive COVID-19 test came back for one of his staff members working at his office in the Capitol in Carson City.

Sisolak’s spokeswoman Meghin Delaney says the Democratic governor has not had in-person contact with the staffer since mid-September.

She said the negative result came back Wednesday after he was tested Tuesday “out of an abundance of caution.”

Sisolak departed northern Nevada on Sept. 17 and has been working from Las Vegas since then.

He intended to return to Carson City next week but those plans are on hold.

All staff in Carson City who came into contact with the staffer who tested positive are now working from home where they will remain in quarantine for 14 days in compliance with CDC guidelines, Delaney said.

JACKSON, MISS. — Preparations for the Mississippi State Fair’s grand opening moved forward Wednesday amid criticism that masks will not be required at the event after the governor repealed the statewide mask mandate.

The event usually draws thousands to the Mississippi State Fairgrounds in the state capital every year for food, carnival rides, music and agricultural expositions. This year, the fair is scheduled to run from Oct. 7 to Oct. 18. Doors open Wednesday night.

While many residents were happy with the opportunity to be able to attend the fair, others said they were choosing to skip the event because of safety concerns associated with the coronavirus pandemic.

“If you’ve ever been to the Mississippi State Fair, you already know: social distancing is practically impossible,” said Zeke Morgan, who grew up in Jackson attending the fair. “This will be a super-spreader event and that’s something that Mississippi can’t handle.”

Governor Tate Reeves previously said during the planning process for the fair that it was likely masks would be required. Then, a week before the fair was scheduled to begin, he repealed the state’s mask mandate.

OKLAHOMA CITY — The number of hospitalizations in Oklahoma due to the illness caused by the coronavirus has surged above 700 to a new record one-day high.

The Oklahoma State Department of Health on Wednesday reported 738 people hospitalized either confirmed with COVID-19 or under investigation for infection.

WASHINGTON — President Donald Trump has returned to the Oval Office for the first time since he was diagnosed with COVID-19.

Spokesman Brian Morgenstern confirmed that the president has returned to the Oval Office. He has been convalescing in the White House residence since he returned from a three-night hospital stay on Monday evening.

Trump is likely still contagious with the virus.

Morgenstern says of the Oval Office return that there are “certainly ways to do it without compromising anyone.”

White House officials say they have put additional safeguards in place to protect staff who may interact with the president, including requiring full personal protective equipment.

Morgenstern says Trump is being briefed on economic stimulus talks and a potentially devastating hurricane heading toward the Gulf Coast.

PARIS — France set a grim new record on Wednesday, with more than 18,700 new cases of COVID-19 infections detected in the past 24 hours.

Health officials said that more than 80 people died of the virus in 24 hours, bringing the total number of deaths linked to the coronavirus to 32,445, among the highest counts in Europe.

In another high, the rate of positives in the increasing number of tests being conducted is over 9 percent, the public health agency said.

Authorities have been trying to beat back the worrying increase in infections that began after the summer holidays when people let down their guard, but do not want to return the nation to the strict two-month lockdown that ended in mid-May.

A day ago, bars were closed down in the Paris area — placed on a maximum alert level — and restaurants are being forced to comply with strict conditions if they want to remain open, like taking names and phone numbers of each client.

Festive activities were banned. Paris far outpaces other French cities for the number of people hospitalized and treated in ICUs, including Marseille, another trouble spot.

On Monday, the director of the Regional Health Authority, Aurelien Rousseau, said about 3,500 new cases of infection were confirmed on average each day in the Paris region, and 36% of ICU beds in the area were occupied by COVID-19 patients.

Health officials tallied 139 new deaths, while 2,128 patients are being treated in Florida hospitals for COVID-19, a slight decrease from Tuesday’s figures. The health department figures do not represent casualties in a 24-hour period, and include deaths from several previous days.

Miami public schools continued to welcome children for physical instruction on Wednesday after more than a month of virtual learning.

Florida Gov. Ron DeSantis said shipments with hundreds of thousands of rapid test kits will help better detect the virus and protect those with underlying conditions.

According to data kept by the Associated Press, Florida’s death toll from the virus is the fifth highest in the country overall and the 12th highest per capita at more than 69 deaths per 100,000 people.

However, an official said Tuesday the Missoula health department would increase enforcement of statewide regulations with unannounced inspections of businesses.

Gov. Steve Bullock has previously said it is up to to local counties and health departments to issue stricter regulations to prevent the spread of the virus.

Bullock was expected to hold a press conference Wednesday afternoon to discuss the outbreak.

The governor’s office says in a statement Wednesday that the staff member had not interacted with Newsom or with staff that routinely interacts with the governor.

Separately, a state employee who works in a space shared with some staff from the governor’s office also tested positive for COVID-19 but the person also had not interacted with the governor or his close staff.

The governor’s office says it received word of both positive tests earlier this week and COVID-19 protocols for California state agencies were implemented.

MADISON, Wis. — Wisconsin’s governor has announced a field hospital at the state fairgrounds will open within the next week as a surge in coronavirus cases threatens to overwhelm hospitals.

According to the state Department of Health Services, only 16% of the state’s 11,452 hospital beds are available as of Tuesday afternoon. The number of hospitalized COVID-19 patients has grown to 853, including 216 in intensive care.

The COVID-19 test results on an additional 262 in-patients are pending. The U.S. Army Corps of Engineers built a 530-bed field hospital on the state fairgrounds in West Allis in April, but it wasn’t needed until now.

Watkins says there is no urgency because the health orders were first issued this spring and the mask order followed in July. The case will go forward. Watkins asked the two sides to file briefs on whether the case should be dismissed.

Alabama Gov. Kay Ivey last week extended the state mask order through Nov. 8. Ivey says the measure has proven effective at helping control the state’s coronavirus outbreak even if some people do not like it.

Moore argued the mandate, as well as state health orders that closed businesses or directed people to stay home, were unconstitutional. The lawsuit was filed by Moore’s Foundation for Moral Law on behalf of seven plaintiffs.

There were 444 people treated for the coronavirus in hospitals on Wednesday. In the past day, the state confirmed 919 new positive cases and 15 deaths.

Despite the increases, Reynolds said hospital officials had reported that they were equipped to handle the surge.

Reynolds emphasized everyone needs to take personal responsibility. Asked whether the state should do more, Reynolds says there would be a cost to requiring more stringent safety measures.

She says it’s a balancing act, and she’s “working with Iowans and businesses across the state. There’s more than just one side of this.”