The Latest: Cuomo can envision baseball in NYC this summer 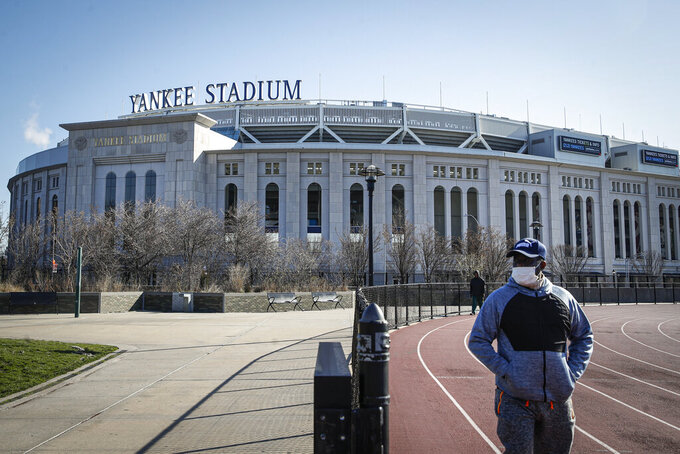 New York Gov. Andrew Cuomo says he can envision baseball games being played without fans this summer at Yankee Stadium and the Mets' Citi Field.

“Be creative. Try to figure it out,” the Democrat said during his briefing Sunday. “But if players could get paid more than staying home and owners would get some revenue versus total shutdown, why not? I’d love to watch.”

Cuomo says he has spoken with owners of professional sports teams, but he did not identify which ones. They would have to make the economics work without gate revenue but with broadcast revenue.

“It would have to be up to them, that they do an economic analysis that says, yeah, some revenue is better than no revenue, and my players are willing to negotiate a contract reduction,” Cuomo said. “Everybody has to think outside the box, right? Because there is no box.”

The Professional Bull Riders returned from a 41-day break this weekend in Guthrie, Oklahoma, for an Unleash The Beast event originally scheduled for Las Vegas.

The two-day competition at Lazy E Arena was closed to fans to prevent the spread of the coronavirus.

Fabiano Vieira won the competition with the only 3-for-3 performance. The 37-year-old Brazilian opened Saturday night with an 87.25-point ride on Uncle Gangster, leaving him third after the first round. He covered Flight Risk for 86 points in the second round Sunday to take the lead and secure the first pick in the championship bull draft. Vieira selected Bullseye and had an 89.5-point ride.

The Cleveland Indians will pay regular salaries to full-time employees through June 30, but the club has had to furlough others due to the COVID-19 outbreak.

The team said senior executives took “voluntary salary reductions” to ensure the team could continue to pay staffers. The Indians confirmed they have furloughed “many of our part-time employees and interns.” Those will take effect on May 1.

The Indians are one of the few teams to guarantee full-time workers their salaries through June.

MLB Commissioner Rob Manfred told teams last week he was suspending non-player personnel contracts on May 1. Many teams agreed to pay employees through May.

Baseball has been shut down since March 12 and the start of the season remains unclear.

For the first time, the Arkansas Derby will be run in two divisions next weekend. Both will carry the full 170 qualifying points for the Kentucky Derby.

A total of 22 horses are expected to run on Saturday between the two divisions, including winners of the Breeders’ Cup Juvenile, Rebel Stakes, Tampa Bay Derby and Louisiana Derby.

Oaklawn Park in Hot Springs has been racing without fans since March 13 because of the coronavirus.

Oaklawn president Louis Cella says that because of the large number of 3-year-olds wanting to run in the 84th edition of the race, the track didn’t want to see any of them left out.

Italian Premier Giuseppe Conte has announced that professional sports teams can resume training on May 18.

The move means that the Serie A soccer league could resume playing games in June.

Twelve rounds remain in Serie A, plus four other games that were postponed from the 25th round. The Italian Cup was suspended after the first leg of the semifinals.

Conte also said that athletes in individual sports can resume training on May 4.

The Italian filmed himself breaching social distancing regulations and is set to face disciplinary action. The Daily Mirror newspaper says the video was posted to friends on social networking site Snapchat.

Everton says it was “appalled to learn of an incident in which a first team player ignored government guidance and club policy in relation to the coronavirus crisis. The club has strongly expressed its disappointment to the player and made it clear that such actions are completely unacceptable.”

The northwest England club says it has been stressing to staff the importance of following government rules to help the National Health Service deal with the COVID-19 outbreak.

The 20-year-old Kean has failed to impress in his debut season in England, scoring just once in 26 games for Everton.

The Premier League has been suspended since last month.