The Latest: Curling worlds back on, now with masked players 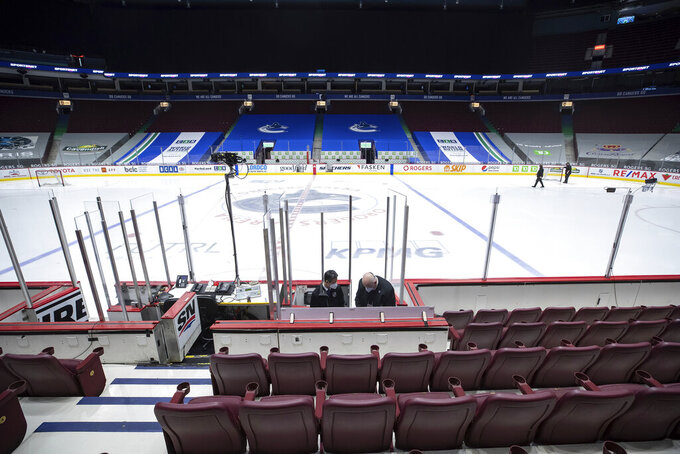 The curling world championship playoffs resumed Sunday with players wearing masks after taking a day off due to a positive COVID-19 test inside the Calgary bubble.

The World Curling Federation first announced three positive, asymptomatic results during exit testing on Friday from teams that had not advanced to the playoffs. Saturday’s matches were postponed for further testing, and one player on a playoff team also tested positive and was initially ruled out of the competition.

But the federation said that it consulted with Canadian health officials and decided to allow the player to compete. In a statement issued on Sunday before resuming play with a triple-header, the WCF said the player tested positive on Friday had a follow-up test that was negative on Saturday.

The player was not identified.

“The player ... had previously received a full vaccination — two doses — in his home country prior to the beginning of the championship,” the WCF said in a statement.

“The facts surrounding this specific individual were argued to be strong enough for a re-evaluation of the earlier decision, after it was determined that it would put his teammates and opponents at a very minimal risk by participating in Sunday’s playoff games.”

In Sunday’s matches, Switzerland defeated the United States 7-6 in a qualification game to advance to the semifinals against Sweden. Scotland will play the team from Russia in the other semifinal. The Americans and Canadians also earned a berth in the 2022 Olympics by reaching the final six.

The NHL says the Vancouver Canucks’ team facilities scheduled to open Sunday will remain closed until at least Monday after an additional player entered the league’s COVID-19 protocol.

The league says the player has not been around the team since March 31, but the decision was still made to push back the reopening of the Canucks' facilities. The league added it doesn’t believe this will endanger Vancouver resuming the season Friday.

The Canucks haven’t played since March 24 after a COVID-19 outbreak caused 21 players and four staff members to test positive. They had 19 roster players on the protocol list Saturday.